When Is Someone Really, Truly Dead? The World Brain Death Project Seeks a New Answer

After your heart beats one last time, but before your body begins to decay, your life will come to an end. Strange as it seems, physicians around the world can't agree on the exact moment death finally occurs.

A project aiming to find consensus on human mortality has now published its recommendations on what should constitute minimum clinical standards qualifying an individual as officially deceased.

Given the sheer diversity of legal, religious, and moral values different cultures use to frame perspectives on death, it's unlikely that any single report will unite conflicting opinions.

It's not the first time researchers have sought a universal definition of death founded in medical science, either.

But the World Brain Death Project's senior author, University of Southern California medical director Gene Sung, argues the contents of his team's report are a good place to start.

"This is an important, complex subject. Reaching this kind of consensus across so many organisations is a first," says Sung.

"With this paper and its 17 supplements – virtually a textbook – it's a foundation that we hope will minimise diagnostic errors and build trust."

The recommendations aren't so much a single column of boxes to step through, or a concise definition, but rather a way for medical communities from diverse backgrounds to find clear lines of agreement.

Through a mix of flow charts, check lists, and decision trees, the report categorises the observations necessary in weighing up whether a patient's condition is potentially reversible. 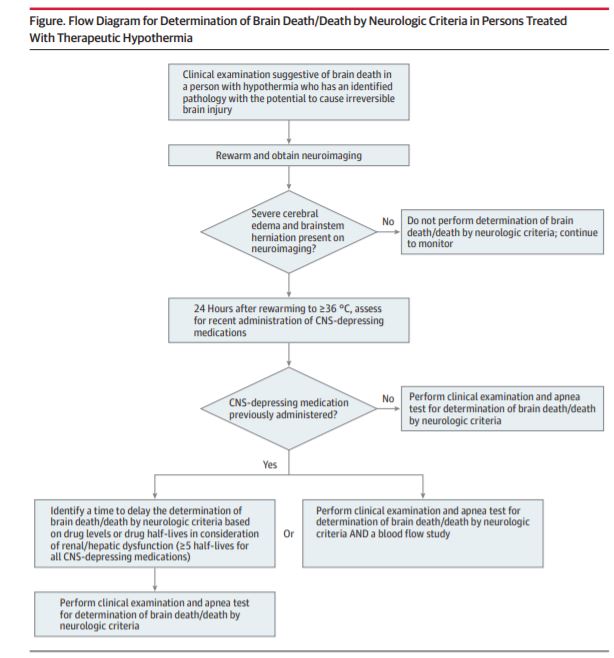 Many of these are recognisable to most medical professionals, and include looking for an absence of facial reactions to uncomfortable stimulations, fixed pupils, no gag reflexes, and no spontaneous breaths when blood acidity drops far enough.

There are also some sensible suggestions, such as checking for existing conditions that could mask or mimic brain death - say, the neurological disease Guillain-Barré syndrome, or drugs or treatments that might confuse a diagnosis.

Children, the paper advises, should receive a second neurological exam, given their young brains can recover from some conditions differently to adults.

The paper also takes resource availability into account, as well as the legal and cultural differences various medical communities will be subjected to.

As an expert on brain death and a physician intimately familiar with the impact traumatic brain injuries can have on his patients and their loved ones, Sung understands too well the importance of having clear guidelines on when to call it final.

"That's why I started this project – we still have some difficulty in dealing with and understanding these problems," says Sung.

In days long gone, death was the long, eerie silence of a still chest. Unable to feel a pulse or witness a breath, a doctor could gamble that an unconscious body was ready for the grave.

Of course, mistakes happened. And still do happen. A lot. More often than we might want to admit. So the search has continued for criteria that could prevent the nightmarish error of sending a living person to the morgue.

What's more, with the advent of ventilators and improved methods for resuscitation helping us bring 'the recently dead' back to life, the medical world was desperate for a better way to distinguish a point of no return.

By the 1960s French neurophysiologists expanded on definitions of comas to include what would come to be seen as brain death. The first official criteria for diagnosing a relative lack of neurological function were published in 1968, commonly known as the Harvard Brain Death Criteria.

Medical communities around the world have since prioritised their own subtle differences in involuntary movements, blood flow, brain wave patterns and locations of residual electrical activity, leading to a number of very different sets of brain death criteria.

Religious sensitivities on how long to wait for mortuary preparations weigh in on decisions around the world. Legal precedents also make a difference in the rights of the dead and dying.

Trust in the medical system is paramount, with complex views on the timing and prioritisation of organ donation affecting how we see a doctor's decisions around diagnosing an end to a life.

With so many variables to take into consideration, Sung and his team saw they needed to rely on more than medical literature and clinical experiments for finding a consensus.

Taking into account the advice of medical experts across disciplines and from different cultures around the world, their report has been endorsed by dozens of eminent medical societies.

Not without a hint of irony, a universal definition on death needs to be embedded in a living document, one that evolves not just with advances in scientific knowledge, but with an awareness of the communities who need to put their trust in it.

This research was published in JAMA.