China is now the proud owner of the world's first all-electric cargo ship and has already put the vehicle to use.

As reported by China Daily, the 2,000-metric-ton ship was launched in the city of Guangzhou last month and runs in the inland section of the Pearl River.

Constructed by Guangzhou Shipyard International Company Ltd, it can travel 80 kilometres (approximately 50 miles) after being charged for two hours. As noted by Clean Technica, two hours is roughly the amount of time it would take to unload the ship's cargo while docked.

It's definitely not the fastest electric vehicle we've seen hit the water, but it's designed for transporting numerous objects rather than speed.

"As the ship is fully electric powered, it poses no threats to the environment," said Huang Jialin, general manager of Hangzhou Modern Ship Design & Research Co, the company behind the ship's design.

"The technology will soon be likely … used in passenger or engineering ships." 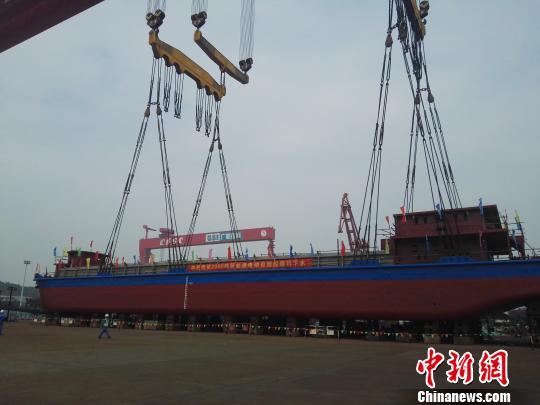 While the ship is yet another sign of the changes coming to our relationship with fossil fuels, its cargo shows we're still a ways off from a complete shift.

Ironically, the world's first all-electric cargo ship is being used to move coal, according to Chen Ji, general manger of Guangzhou Shipyard International.

Yes, despite generating zero emissions on its own, the cargo ship is still, in a way, contributing to the generation and spread of gas emissions that have led to global warming.

It's still an objectively better scenario that a traditional cargo ship carrying coal, but one can easily see how using clean energy to make coal cheaper misses the entire point of clean energy.

Hopefully the electric cargo ship won't be carrying coal for long, and China can find it better haulage. Perhaps parts for wind turbine construction. Or even additional lithium-ion batteries.

Whatever the short-term future holds, we're seeing more of the means we need to improve in the long-term.