They say there are plenty of fish in the sea, but to be perfectly honest with you, that's not always entirely true.

Take the red handfish (Thymichthys politus), for instance. This extremely rare fish – thought to be the world's rarest, in fact – is so scarce that up until last week, scientists knew of only one population, numbering between 20-40 individuals. Now, thanks to a chance discovery, their ranks have doubled.

After a member of the public reported laying eyes on one of these rarely seen specimens, divers from the Australian Institute for Marine and Antarctic Studies (IMAS) and citizen science project Reef Life Survey discovered a whole second community of the animals – although they almost missed them.

"We were diving for approximately three and a half hours, and at about the two-hour mark we were all looking at each other thinking this is not looking promising," says one of the researchers, Antonia Cooper.

"My dive partner went to tell the other divers that we were going to start heading in, and I was half-heartedly flicking algae around when, lo and behold, I found a red handfish." Before now, the species' only known population lived off the coast of south-east Tasmania's Frederick Henry Bay.

The new clan resides in a different area kilometres away, which hasn't yet been publicly disclosed because the researchers want to make sure they consider any population management issues before giving up the location.

But finding the new group is a thrill – because the animal's extreme rareness is a real concern for the species' ongoing survival, so swelling their ranks with another estimated 20-40 members (so far eight have been spotted) is a bit like hitting the jackpot.

"Finding this second population is a huge relief," explains marine biologist Rick Stuart-Smith from the University of Tasmania, "as it effectively doubles how many we think are left on the planet."

But the red handfish's rareness isn't the only remarkable thing about this ocean-dweller. As the name implies, this fish has weird appendages that look remarkably like hands. 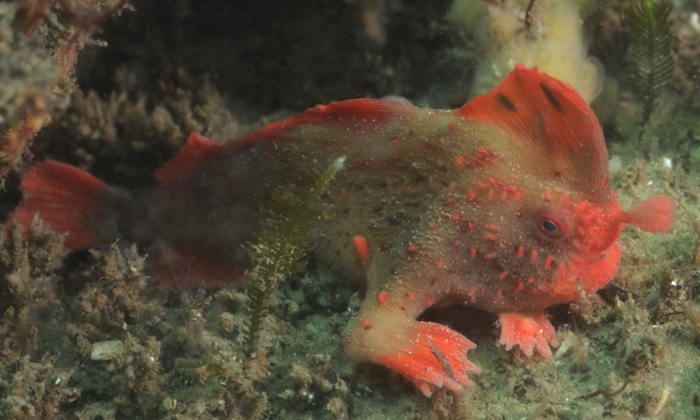 T. politus is one of about 14 species in the handfish family, and these animals don't get about the way other fish do. Instead of swimming, they use their 'hands' – which are actually fore-fins – to move themselves around on the ocean floor.

If Nemo were a handfish instead of a clownfish, he probably never would have gotten lost, because this method of 'walking' or shuffling around the seabed isn't exactly speedy, and it also seems to severely rein in the animals' habitat.

The new population lives in an area about 50 metres (164 ft) by 20 metres (66 ft) – about the size of two tennis courts. A pretty small neighbourhood when you think about it, which is one of the reasons why they're so hard to pin down.

"We've already learned a lot from finding this second population because their habitat isn't identical to that of the first population," Stuart-Smith explains, "so we can take some heart from knowing red handfish are not as critically dependent on that particular set of local conditions."

If another fish were to lay claim to the title of world's rarest fish, it might be T. politus's handfish cousin, Ziebell's handfish, but sadly it hasn't been sighted in over a decade, and researchers fear the species may have become extinct. 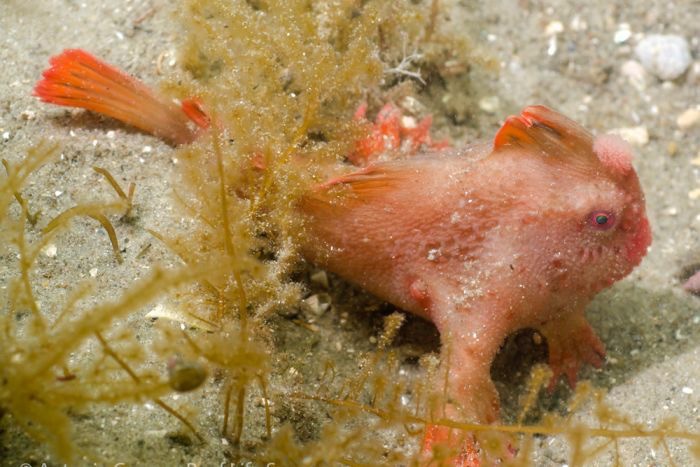 Hopefully, the discovery of this second population means the red handfish has an alternative destiny ahead of it.

One that, slowly but steadily, it is waddling towards.