Elon Musk's growing constellation of internet satellites has been sending streaks of bright light across night skies around the world. Even the biggest comet to pass Earth in 25 years wasn't spared.

A striking photo showing Comet Neowise behind those streaks of light shows how easily the satellites can upstage observations of distant objects in space.

The satellite project, called Starlink, is Musk's plan to blanket Earth in high-speed satellite internet. The effort has drawn criticism from professional and amateur astronomers, however, because the bright satellites can mar the skies and disrupt telescope observations. 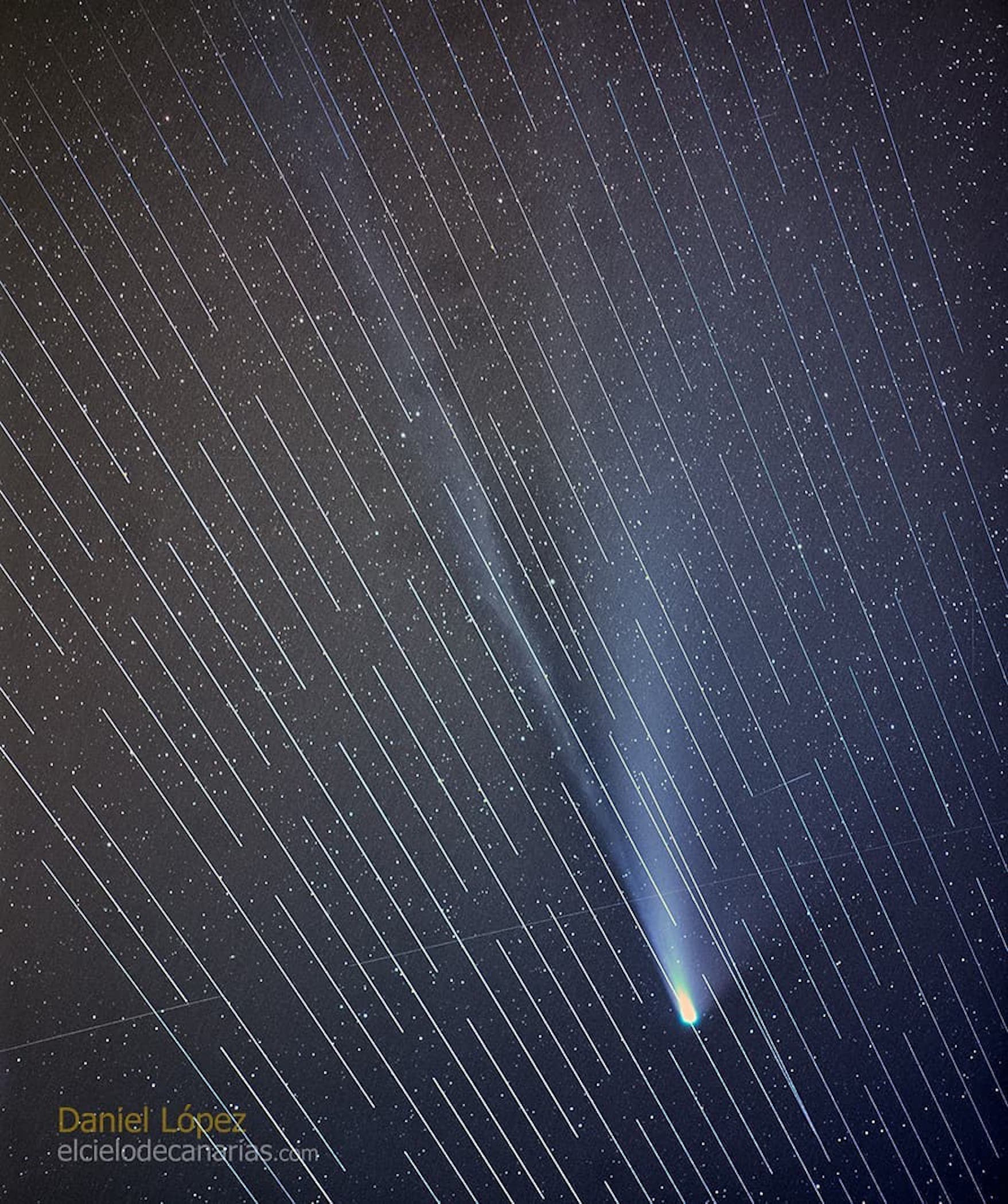 That's what happened to the astrophotographer Daniel López on July 21, when he was shooting Comet Neowise before it flies out of view for another 6,800 years. He shared the resulting image on the Facebook page of his photography company, El Cielo de Canarias, saying it was a shame to see the satellites make such a spectacle.

López's photo is a composite of 17 images taken in the span of 30 seconds. Each image was long exposure, meaning it captured the comet over several seconds.

The astronomer Julien Girard shared the picture on Twitter, saying the satellites had "completely photobombed" the comet.

"Two of my pictures the other night were also bombed by a Starlink," Girard said.

López also shared the time-lapse video behind the picture. He added that traces of the satellites were visible in 20 of his images.

Because it's a composite time-lapse photo, the image doesn't show what you would see with the naked eye. But it illustrates why many astronomers worry about the threat that satellite constellations like Starlink pose to ground-based astronomy.

Too many satellites could mess with astronomy on Earth

Long-exposure images are a crucial part of studying distant objects in the night sky. Telescopes on Earth watch celestial targets for hours, slowly building up a detailed image that offers astronomers rich data.

But one poorly timed Starlink satellite can ruin that kind of research by creating a long streak across the image and blocking the objects that astronomers want to study.

"In that couple of seconds, a whole 10- or 15-minute exposure is ruined," the astronomer Jonathan McDowell told Business Insider in June.

SpaceX is sharing Starlink's orbital-path data with astronomers so that they can plan their telescope observations around the satellites' movements. Briefly shutting off the camera as the satellite passes overhead can save a long-exposure image.

But Musk's ambitions could make it nearly impossible to avoid the fast-moving satellites. SpaceX has sought government permission to put a total of 42,000 satellites into orbit to form a "megaconstellation" around Earth.

SpaceX isn't the only company building a massive fleet of satellites. Companies like OneWeb and Amazon have similar ambitions.

"The sky will not be what it has been for millions of years. Thousands of dots will appear and disappear in the night sky," López told Gizmodo. "I personally think that if no action is taken, it will be the end of astronomy as we know it from the surface of the Earth."

"The night sky is for everybody. It has been scrutinised and used for millennia," Girard said. "We should cherish it and protect it just like our Earth."