You Can't See It, But Humans Actually Glow With Our Own Form of Bioluminescence

When you hear about bioluminescence, your mind probably jumps to deep-sea creatures like the angler fish, which uses millions of bacteria to make a light appear in front of its head to catch prey and illuminate your nightmares. But what about humans?

According to a study conducted in 2009 by Japanese researchers, human bioluminescence in visible light exists - it's just too dim for our weak eyes to pick up on.

"The human body literally glimmers," the team from the Tohoku Institute of Technology wrote in their study published in PLOS One. "The intensity of the light emitted by the body is 1,000 times lower than the sensitivity of our naked eyes."

The team made this odd discovery using super-sensitive cameras to monitor five healthy male volunteers for 20 minutes every 3 hours inside a light-tight room for three days straight (in between sleep, of course).

They found that participants 'glowed' throughout the day, with the brightest spots appearing around the forehead, neck, cheeks in the late afternoon. The dimmest bioluminescence was recorded late at night.

And this wasn't infrared radiation caused by heat - despite how the images might appear. Those signals are actually from photons of visible light (light particles) not caused by heat: 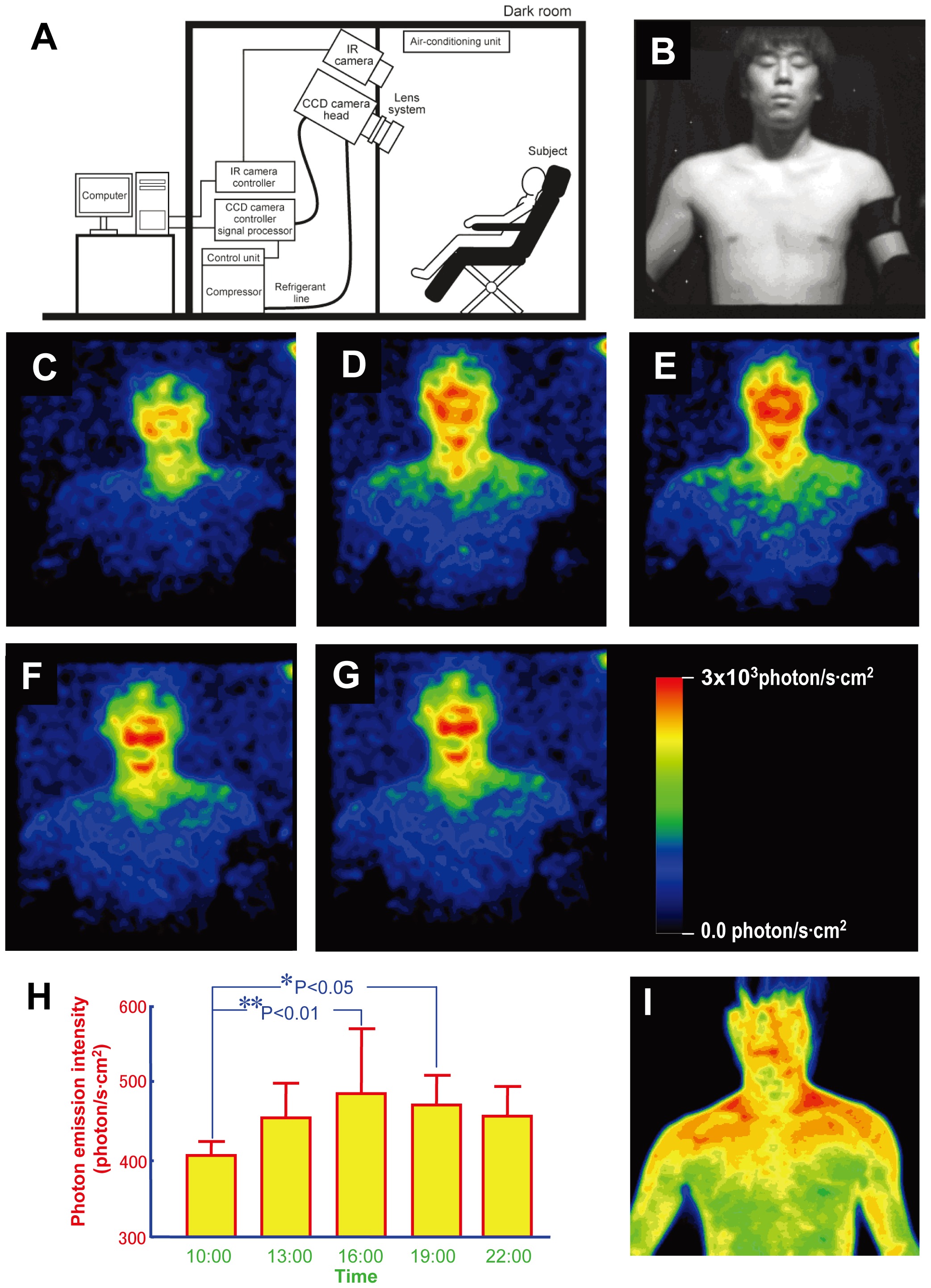 So what's going on here? Well, it's actually a pretty interesting side-effect of our metabolisms.

As Elliot Bentley sums up for The Guardian, human bioluminescence is "the result of highly reactive free radicals produced through cell respiration interacting with free-floating lipids and proteins".

These excited molecules can then interact with fluorophores, which can emit a photon, and boom, you're actually glowing.

The team thinks the participants' heads glowed the most because this part of the body generally sees more sunlight, affecting the melanin inside the skin and triggering the illuminating reaction better than other areas.

Further backing up the hypothesis that animal bioluminescence is attached to metabolic rates, the researchers suggest that the glow could be linked to the body's biological clock.

So, in the late afternoon when we're burning the most energy, we glow the brightest.

The team hopes that in the future, we might be able to scan a person's body surface to check light levels, indicating possible medical conditions that express themselves in changes of metabolism.

"If you can see the glimmer from the body's surface, you could see the whole body condition," team member Masaki Kobayashi told Charles Q. Choi at Live Science.

So the next time someone tells you you're glowing, you'll know they're speaking the truth.