Scientists have developed a new method for testing blood via sound waves, which could lead to a compact, portable testing kit that's simpler and more straightforward than the equipment in use today.

The test targets exosomes - tiny packets released by cells to carry messages around the body, including information about disease. Intercept those packets, and you can learn a lot about the body's health.

Existing test methods like ultracentrifuges or chemical tags also risk damaging the blood samples along the way, something which won't happen with the new technique, according to the international team of researchers who developed it.

"Acoustic sound waves are much gentler," says one of the team, Ming Dao from MIT. "These particles are experiencing the forces for only a second or less as they're being separated, which is a big advantage." 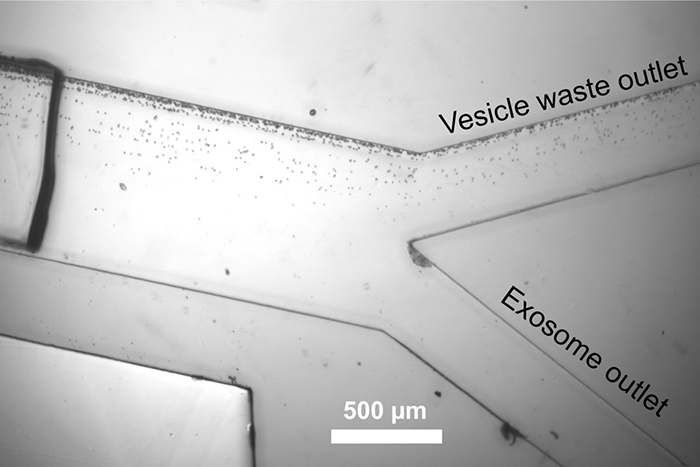 The new process is based on work done by the same team in 2014. Blood is passed through a very small channel and exposed to two tilted acoustic transducers, and as the sound waves from these transducers meet, they form pressure points.

These points can be used to divert cells into different channels depending on their size, and here the researchers used two of the devices: one to sort out the cells and platelets from the blood, and one to isolate the exosomes with higher frequency sounds.

"These exosomes often contain specific molecules that are a signature of certain abnormalities," says Dao. "If you isolate them from blood, you can do biological analysis and see what they reveal."

Exosomes have previously been flagged up as markers for cancer, kidney problems, and neurodegenerative disease, among other health issues – so getting a device that can be taken anywhere and can pick out exosomes from blood quickly would be a big win.

It's less invasive than a biopsy, it's accurate, and to begin with the researchers are going to see if they can use the technology to spot abnormal pregnancies earlier.

"The new technique can address the drawbacks of the current technologies for exosome isolation, such as long turnaround time, inconsistency, low yield, contamination, and uncertain exosome integrity," says one of the researchers, Tony Jun Huang from Duke University.

"We want to make extracting high-quality exosomes as simple as pushing a button and getting the desired samples within 10 minutes."

That is still some way off but considering the process of high-speed centrifugation can take 24 hours to complete, the hope is that results can be obtained much faster.

Using the new device, scientists were able to process a 100-microlitre, undiluted blood sample in less than 25 minutes.

What's more, it could help doctors analyse the condition of hard-to-reach organs – such as the placenta during pregnancy – by extracting and quickly testing blood samples.

"The capability of this method to separate these nanoscale vesicles, essentially without altering their biological or physical characteristics, offers appealing possibilities for developing new ways of assessing human health as well as the onset and progression of diseases," says one of the team, Subra Suresh from Nanyang Technological University in Singapore.