A Hunk of Sea Ice Bigger Than India Has Vanished

Sea ice off the coast of Antarctica and the Arctic hit record lows in November, and scientists are now reporting that, as of December 4, we've lost 3.76 million square kilometres of the stuff - more than the total area of India.

As startling as that is, at this point, we shouldn't really be surprised - last month, temperatures in parts of the Arctic rose 20 degrees Celsius (36°F) above normal, and 2016 is on track to be the hottest year on record.

"There are some really crazy things going on," Mark Serreze, director of the US National Snow and Ice Data Centre (NSIDC) told Alister Doyle for Reuters.

"It's an extraordinary departure from the norm," added Anders Levermann from the Potsdam Institute for Climate Impact Research in Germany. 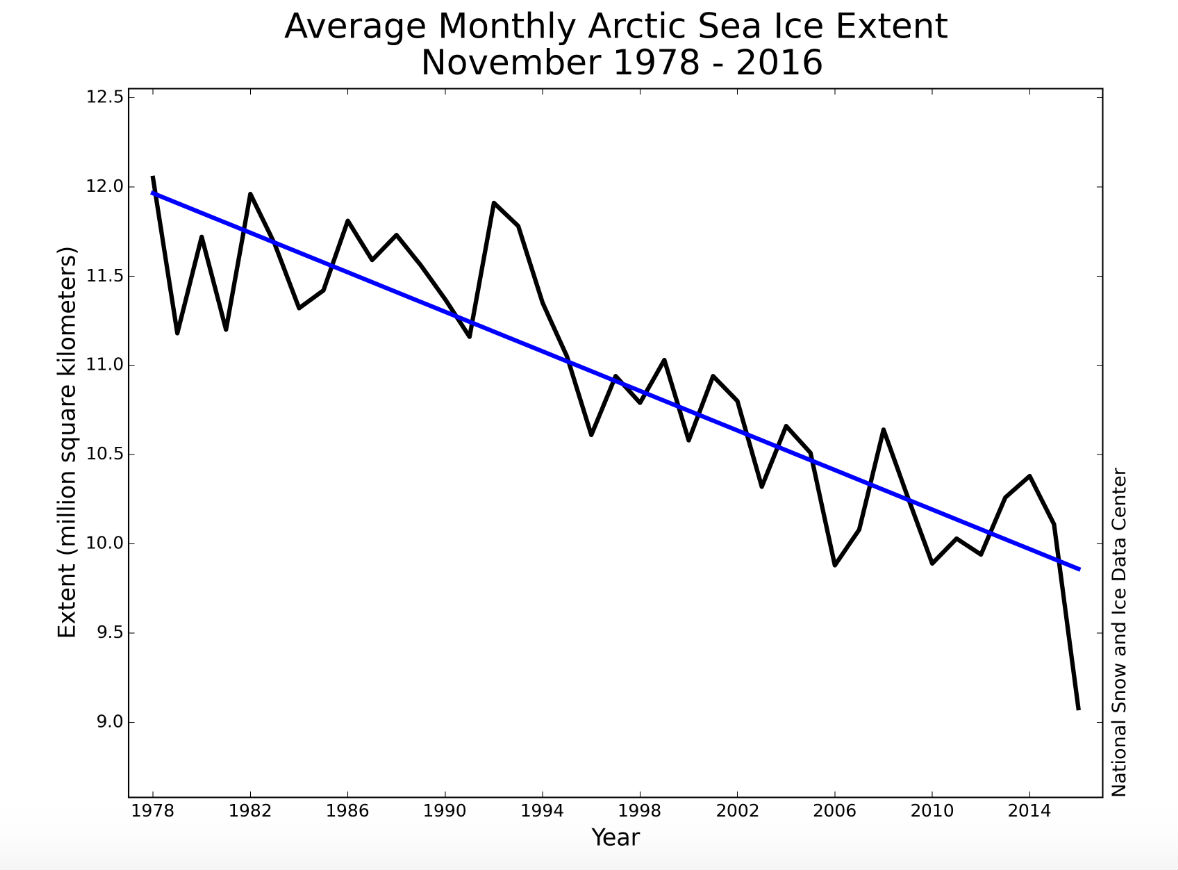 Antarctica, which has so far appeared more resilient to the effects of rising temperatures than the Arctic, also started to rapidly decline in November, and it too set a record low for the month.

NSIDC reports that once Antarctic sea ice reached its annual maximum extent on August 31 - way earlier than expected - it's been declining fast, and it's now 1 million square kilometres (386,000 square miles) below the previous record low, set in 1986.

The "almost unprecedented" disappearance of sea ice comes at a time when the Arctic sea ice is usually starting to recoup its losses from the previous summer, but with unusually high temperatures in the sea and atmosphere right now, it hasn't been given the chance to recover even slightly.

"It looks like a triple whammy - a warm ocean, a warm atmosphere, and a wind pattern all working against the ice in the Arctic," Serreze told Oliver Milman at The Guardian.

While the Arctic's fate has been pretty straightforward over recent years - above average temperatures equals above average sea ice loss - Antarctica has posed more of a challenge for scientists to decipher.

Despite sea ice in the Arctic having never been so depleted, the melt-off in Antarctica has been far more subtle, and at some points in recent years, its sea ice has actually expanded.

But now that we've seen 1 million square kilometres disappear into the ocean - more than double the previous 1986 record - the cracks (literally) are starting to show.

As Serreze told Reuters, the twin record lows might be "blind dumb chance", but the worry is that, "Antarctica is the sleeping elephant that is beginning to stir."

One sign that Antarctica is headed for a delayed, but devastating, response to climate change was the appearance of thousands of strange blue lakes back in August - the exact same kind that caused Greenland's ice sheet to lose a whopping 1 trillion tonnes of ice between 2011 and 2014.

"[East Antarctica is] the part of the continent where people have for quite a long time assumed that it's relatively stable," one of the researchers who spotted the lakes, Stewart Jamieson from Durham University, said at the time.

"There's not a huge amount of change, it's very, very cold, and so, it's only very recently that the first supraglacial lakes, on top of the ice, were identified."

As you might have guessed, none of this has positive implications for the fate of humanity, because all that sea ice is melting into the ocean and in doing so, it amplifies the warming process by exposing the 'dark sea' that was once beneath it to sunlight, and this in turn causes more ice to melt.

We've already lost five Pacific islands to rising sea levels this year, we might have to start looking at this as the eventual reality for humanity: