A French man who lives a relatively normal, healthy life - despite damaging 90 percent of his brain - is causing scientists to rethink what it is from a biological perspective that makes us conscious.

Despite decades of research, our understanding of consciousness - being aware of one's existence - is still pretty thin. Many scientists think that the physical source of consciousness is based in the brain, but then how can someone lose the majority of their neurons and still be aware of themselves and their surroundings?

First described in The Lancet in 2007, the case of the man who appears to be missing most of his brain has been puzzling scientists for almost 10 years.

The French man was 44 years old at the time the journal article came out, and although his identity was kept confidential, the researchers explained how he'd lived most of his life without realising anything was wrong with him.

He only went to the doctor complaining of mild weakness in his left leg, when brain scans revealed that his skull was mostly filled with fluid, leaving just a thin outer layer of actual brain tissue, with the internal part of his brain almost totally eroded away.

You can see his scans below: 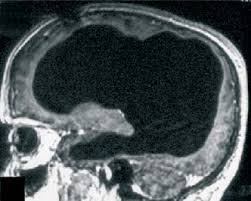 Doctors think the majority of the man's brain was slowly destroyed over the course of 30 years by the build-up of fluid in the brain, a condition known as hydrocephalus. He'd been diagnosed with it as an infant and treated with a stent, but it was removed when he was 14 years old, and since then, the majority of his brain seems to have been eroded.

But despite his minimal remaining brain tissue, the man wasn't mentally disabled - he had a low IQ of 75, but was working as a civil servant. He was also married with two children, and was relatively healthy.

Not only did his case study cause scientists to question what it takes to survive, it also challenges our understanding of consciousness.

In the past, researchers have suggested that consciousness might be linked to various specific brain regions - such as the claustrum, a thin sheet of neurons running between major brain regions, or the visual cortex.

But if those hypotheses were correct, then the French man shouldn't be conscious, with the majority of his brain damaged.

"Any theory of consciousness has to be able to explain why a person like that, who's missing 90 percent of his neurons, still exhibits normal behaviour," Axel Cleeremans, a cognitive psychologist from the Université Libre de Bruxelles in Belgium, told Quartz.

In other words, it's unlikely that one specific region on its own is going to be responsible for consciousness.

Cleeremans has instead come up with a hypothesis that's based on the brain learning consciousness over and over again, rather than being born with it. Which means its location can be flexible and learnt by different brain regions.

"Consciousness is the brain’s non-conceptual theory about itself, gained through experience - that is learning, interacting with itself, the world, and with other people," he explains.

He first published this idea back in 2011, and has now given a lecture on the subject at the 2016 Association for the Scientific Study of Consciousness conference in Buenos Aires in June.

He calls his hypothesis the 'radical plasticity thesis', and it fits in pretty well with recent research that suggests the adult brain is more adaptable than we previously thought - and capable of taking on new roles in case of injury.

As Olivia Goldhill reports for Quartz:

"Cleeremans argues that in order to be aware, it’s necessary not simply to know information, but to know that one knows information. In other words, unlike a thermostat that simply records temperature, conscious humans both know and care that they know.

Cleeremans claims that the brain is continually and unconsciously learning to re-describe its own activity to itself, and these descriptions form the basis of conscious experience."

But what does all that have to do with a man surviving with only 10 percent of his brain? According to Cleeremans, even though his remaining brain was only tiny, the neurons left over were able to still generate a theory about themselves, which means the man remained conscious of his actions.

In itself, the concept isn't new - we're discovering more and more each day just how flexible and adaptable our brains really are. Just this week, scientists were able to trigger brain cells to start growing again in order to restore vision in blind mice.

But it's a striking reminder of what our brains can learn to achieve, even when they're incredibly damaged, and provides hope that we might one day learn how to reverse some of the illnesses that cause neurodegeneration.

Update 3 Jan 2017: This man has a specific type of hydrocephalus known as chronic non-communicating hydrocephalus, which is where fluid slowly builds up in the brain. Rather than 90 percent of this man's brain being missing, it's more likely that it's simply been compressed into the thin layer you can see in the images above. We've corrected the story to reflect this.