As the fight against antibiotic-resistant superbugs continues to get more dire, scientists may have found a new weapon for tackling some of the worst superbugs we know of: a new antibiotic called darobactin, which is able to take on gram-negative bacteria.

Darobactin took some finding though, across two years of research – the antibiotic compound was discovered in Photorhabdus bacteria, lurking inside the gut of tiny parasitic worms known as nematodes.

The hope is that darobactin can be developed into something suitable for humans – the first time such a leap would have been made from an animal microbiome – and give us new options for countering bugs that have developed antibiotic resistance. 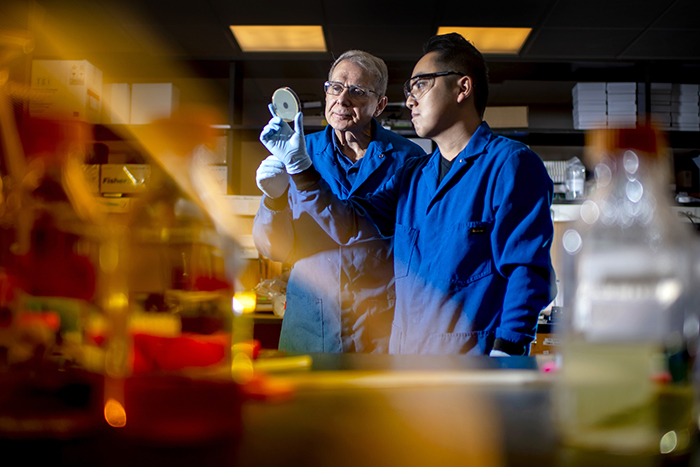 What makes gram-negative bacteria so particularly stubborn is the outer membrane that these cells develop, which acts as an extra barrier against any kind of attack. Darobactin is special in that it breaks through this barrier by interfering with the BamA protein that controls access to the outer membrane.

"Darobactin binds to that [BamA] protein and jams it, so it cannot open anymore," says molecular microbiologist Kim Lewis, from Northeastern University in Massachusetts. "The bacteria cannot build a proper cell envelope, and that causes death."

In lab experiments, the new antibiotic was able to cure mice of dangerous Escherichia coli and Klebsiella pneumoniae infections, without any toxic side effects. Getting darobactin ready for humans will undoubtedly take a long time, but this is a promising start.

Researchers identified the nematode as a possible host for an effective antibiotic because of the way these worms feed on insects, targeting their larvae and releasing bacteria that then have to fight pathogens similar to those inside the human gut.

And that makes darobactin a promising candidate for human use – even if animal microbiome antibiotics haven't been successful in humans before, Photorhabdus has evolved over 370 million years to fend off gram-negative bacteria.

Whatever help we can get from darobactin, we need it as quickly as possible. Gram-negative bacteria are up at the very top of a list of "priority pathogens" that pose the greatest threat to human life right now.

This is all playing out against the backdrop of a wider antibiotic-resistance problem – bugs are essentially developing defences faster than we can develop drugs to target them. Around 700,000 people each year are estimated to be dying from drug-resistant infections, and that could rise into the many millions in years to come.

We're not out of the tunnel yet when it comes to drug-resistant gram-negative bacteria, but we might have some light at the end of it – researchers have described it as "another shot on goal" for tackling superbugs.

"We are running out of antibiotics," says Lewis. "We need to be looking for novel compounds with no pre-existing resistance in the clinic or the population."