Although the Moon has no atmosphere, it has loads of oxygen, all mixed up with the dust on the lunar surface in the form of oxides.

Last year, scientists published a paper on how to extract it from a Moon dust (regolith) simulant; now, the first prototype oxygen plant is going to be attempting that extraction on a larger scale.

If it works, it could provide humans with important resources that will aid future Moon missions, and maybe even enable long-term Moon bases and colonies.

"Having our own facility allows us to focus on oxygen production, measuring it with a mass spectrometer as it is extracted from the regolith simulant," said chemist Beth Lomax from the University of Glasgow in Scotland.

"Being able to acquire oxygen from resources found on the Moon would obviously be hugely useful for future lunar settlers, both for breathing and in the local production of rocket fuel." 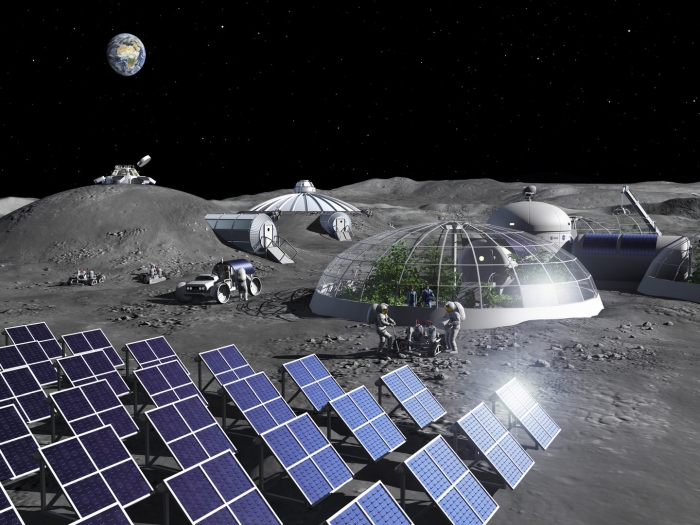 Artist's illustration of a Moon base. (P. Carril/ESA)

The facility, set up at the European Space Agency's European Space Research and Technology Centre in the Netherlands, will use the technique developed by Lomax and her colleagues.

We know, based on returned samples of lunar regolith - the loose dust, rocks and dirt on the surface of the Moon - that oxygen is actually really abundant in this material. Between 40 and 45 percent of the regolith by weight is oxygen.

Using an exact copy of lunar regolith made on Earth called lunar regolith simulant, attempts have been made in the past to figure out how to extract the oxygen, with poor results - too complicated, too low-yield, or destructive of the regolith.

First, the regolith is placed in a mesh-lined basket. Calcium chloride - the electrolyte - is added, and the mix is heated to around 950 degrees Celsius, a temperature that doesn't melt the material. Then, an electrical current is applied. This extracts the oxygen, and migrates the salt to an anode, where it can be easily removed.

This can extract up to 96 percent of the oxygen from the regolith; as an added bonus, the material left over from this process is a mix of metal alloys.

"This is another useful line of research, to see what are the most useful alloys that could be produced from them, and what kind of applications could they be put to," said materials scientist Alexandre Meurisse of the European Space Agency.

"Could they be 3D printed directly, for example, or would they require refining? The precise combination of metals will depend on where on the Moon the regolith is acquired from - there would be significant regional differences."

The current set-up in the facility is based on commercial deoxidation facilities, where the oxygen is just a useless by-product that gets vented away. However, as the facility evolves, a way of storing the oxygen will be included.

The end goal, of course, is to develop a facility that could operate on the Moon itself using real lunar regolith, not the simulant.

"ESA and NASA are heading back to the Moon with crewed missions, this time with a view towards staying," said Tommaso Ghidini, Head of the Structures, Mechanisms and Materials Division at the ESA.

"Accordingly we're shifting our engineering approach to a systematic use of lunar resources in-situ. We are working .. towards a sustained human presence on the Moon and maybe one day Mars."