A giant black hole some 100,000 times the mass of the Sun has been detected near the heart of the Milky Way, making it our galaxy's second largest known black hole – coming after the supermassive void at its very centre, Sagittarius A*.

The new discovery, found hiding in a huge cloud of molecular gas, is the best evidence yet of a long-sought class of 'intermediate-mass' black holes, the existence of which could explain how supermassive black holes grow so terrifyingly vast.

Because even though the new find is itself incredibly huge with a mass of around 100,000 times that of the Sun, it still pales in comparison to supermassive black holes that lie at the centre of galaxies, with up to 10 billion solar masses.

Just how such supermassive black holes come to be is something scientists don't fully understand, because we can't yet theoretically explain how some of these ancient, gargantuan phenomena seem to have already formed when the Universe was young.

One hypothesis, which scientists have long been looking to confirm, is the presence of what's called intermediate-mass black holes, which researchers think might act as seeds for their more massive counterparts. 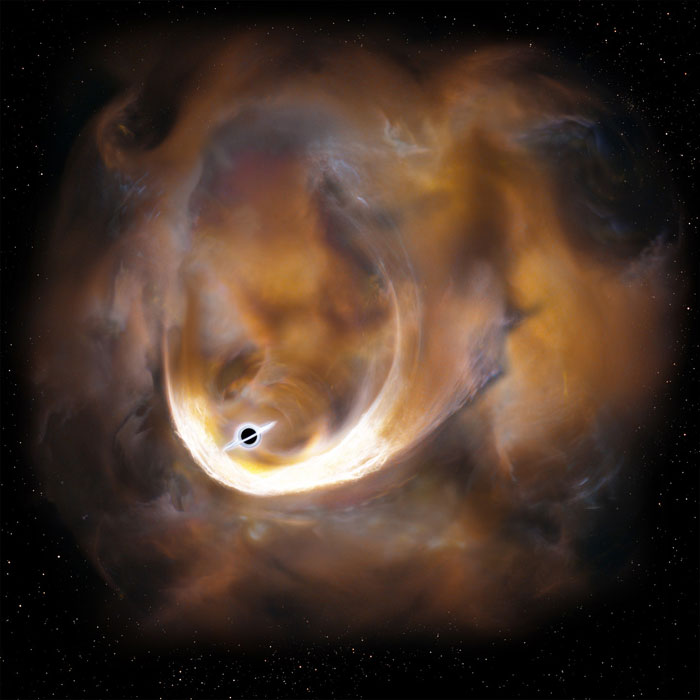 That could be the case here, too, with the newly discovered intermediate – found in a gas cloud called CO–0.40–0.22 – thought to be destined for a slow, one-way trip towards Sagittarius A*, into which it would ultimately be subsumed.

The existence of the new black hole was hinted at last year, when a team from Keio University in Japan discovered the gas cloud, located just 200 light-years away from the centre of the Milky Way.

Unusual movements of gas detected within CO–0.40–0.22 suggested some massive force was accelerating matter inside the cloud, which the researchers hypothesised was our best candidate yet for an intermediate-mass black hole.

Again, the researchers detected a distribution of velocities inside a clump of gas in the cloud, but this time they found something else too: a spectrum of radio waves, similar to the readings Sagittarius A* itself produces, but about 500 times less luminous.

The researchers aren't saying the new measurements confirm that the source of the radio waves – called CO–0.40–0.22* – is in fact an intermediate-mass black hole, but they are claiming the new results offer our best, least ambiguous evidence of the phenomena to date.

If subsequent analysis can prove the hypothesis, it could be a huge turning point for understanding how galaxies evolve – a smoking gun that explains how supermassive black holes dominate the sprawling star systems swirling around them.

"We think some of those black holes are the seeds from which the much larger supermassive black holes grow to at least a million times more massive," astrophysicist Brooke Simmons from the University of California in San Diego, who wasn't involved in the study, explained to The Guardian.

"Astrophysicists have been collecting observational evidence for both stellar mass black holes and supermassive black holes for decades, but even though we think the largest ones grow from the smallest ones, we've never really had clear evidence for a black hole with a mass in between those extremes."

The team thinks CO–0.40–0.22 may be the remnants of a dwarf galaxy that was slowly drawn into the Milky Way, suggesting larger galaxies – and the supermassive black holes they contain – grow by cannibalising their smaller neighbours.

The researchers will continue to study the gas cloud and its radio wave emissions with a view to confirming once and for all whether CO–0.40–0.22* is the intermediate-mass black hole it's suspected of being.

Until then, we'll just have to wait, marvelling at the ongoing mystery of this epic missing link.