A paper published last year that claimed global warming was all to do with the Sun has been retracted. Nature Publishing Group-owned Scientific Reports has found that the paper's conclusion was based on a flawed assumption.

The decision comes after sharp criticism from the scientific community prompted the journal's editors to undertake a further review of the study.

The paper, titled "Oscillations of the baseline of solar magnetic field and solar irradiance on a millennial timescale," led by mathematician Valentina Zharkova of Northumbria University in the UK, was published in June 2019.

It claimed that human activity was not to blame for the roughly one degree rise in global temperatures since the Industrial Revolution, and therefore we can avoid culpability for the shockingly fast upward trend of global temperatures having devastating effects on communities and ecosystems around the world.

Instead, the paper claimed that rising temperatures were due to the changing distance between Earth and the Sun, because of the way the Sun moves around.

The Sun does actually move, a little bit. Although our home star is the most massive object in the Solar System, there are numerous objects orbiting the Sun, and collectively they have quite a lot of mass, too. Thus, the true centre of the Solar System is the centre of its entire mass, and it has a name: the barycentre.

Furthermore, each planet has its own centre of mass between it and the Sun. As the other planets whirl around the Sun, they tug on it a little, so the Sun moves around the barycentre.

Jupiter, naturally, has the biggest influence, so it makes the Sun move the most. These slight Sun movements are called "solar inertial motion," and they're generally pretty small.

In the now-retracted paper, Zharkova et al. contended that the motion of the Sun around the barycentres created by the gas giants was enough to alter the distance between Earth and Sun by up to 3 million kilometres (1.85 million miles), over a timeframe of a few hundred years.

But, as other scientists were quick to point out on PubPeer, Earth doesn't orbit those barycentres. It orbits the Sun. So its average distance from the Sun remains pretty constant on small timescales. 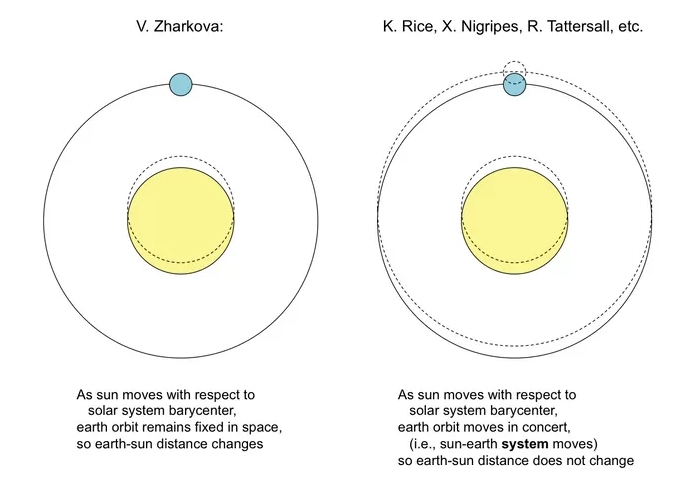 Now, there are changes in Earth's relationship to the Sun. Perturbations from the other planets change the eccentricity of Earth's orbit, its axial tilt, and its precession. These regular changes are called Milankovitch cycles, and they occur over tens of thousands of years.

The current rate of global warming simply can't be explained by such a gradual change in orbit. We're not even close.

This issue is not the only problem with the paper, but it was sufficient grounds for retraction. In a retraction notice attached to the paper, the editors of Scientific Reports explained:

After publication, concerns were raised regarding the interpretation of how the Earth-Sun distance changes over time and that some of the assumptions on which analyses presented in the Article are based are incorrect.

The analyses presented in the section entitled "Effects of SIM on a temperature in the terrestrial hemispheres" are based on the assumption that the orbits of the Earth and the Sun about the Solar System barycenter are uncorrelated, so that the Earth-Sun distance changes by an amount comparable to the Sun-barycenter distance.

Post-publication peer review has shown that this assumption is inaccurate because the motions of the Earth and the Sun are primarily due to Jupiter and the other giant planets, which accelerate the Earth and the Sun in nearly the same direction, and thereby generate highly-correlated motions in the Earth and Sun. Current ephemeris calculations [1,2] show that the Earth-Sun distance varies over a timescale of a few centuries by substantially less than the amount reported in this article.

As a result the Editors no longer have confidence in the conclusions presented.

It's not the first time that Zharkova has come under scrutiny for her claims regarding climate change. A 2015 paper she led claiming that an upcoming unusually quiet period of solar activity would lead to a "mini ice age" was criticised by other scientists as soon as it appeared.

Not only was the solar modelling too simplistic, they found; even if this grand solar minimum was to occur, it wouldn't cool Earth sufficiently to offset the current rate of global warming.

In remarks to retraction website Retraction Watch, Zharkova protested the retraction of the solar movement study, claiming that it was an attempt to reduce the importance of the paper, and the authors' scientific standing.

But the level of criticism from the scientific community suggests that the horse had already well and truly bolted.