There's something very odd about this image from the Hubble Space Telescope. If you look closely, you can see two almost-mirror image, orange-colored galaxies, seemingly connected by a long filament.

Fascinatingly, that's not two galaxies at all, but one, named SGAS J143845+145407. It just appears to be two, thanks to the way the gravity of a massive object (or objects, like a cluster of galaxies) distorts the space that distant light travels through.

Imagine putting a heavy weight on a trampoline, where the weight represents the galaxy cluster, and the trampoline mat represents space-time. Now roll some marbles from one side of the trampoline to the other. Their normally 'straight' paths will seem to curve along different paths, not unlike rays of light through distorted space.

Called gravitational lensing, this quirk of gravity can be used to magnify the light of background galaxies that would be too distant to otherwise see in much detail, as illustrated in the diagram below.

Gravitational lenses like this can therefore be an important tool for understanding the distant Universe.

Sometimes that light can become really smeared and distorted, as seen in the recent deep field image from the James Webb Space Telescope. Those odd, wobbly, worm-like objects are lensed galaxies. When the lensing effect results in four images of a distant object arrayed around the central lensing mass, that's called an Einstein Cross.

SGAS J143845+145407 appears at just the right point behind a small galaxy cluster for gravitational lensing to produce two nearly perfect images of the galaxy, with the added bonus of making them both appear bigger and in greater detail.

The light from SGAS J143845+145407 traveled around 6.9 billion years to reach us. That's about half the current age of the Universe. The cluster's light traveled about 2.8 billion years. 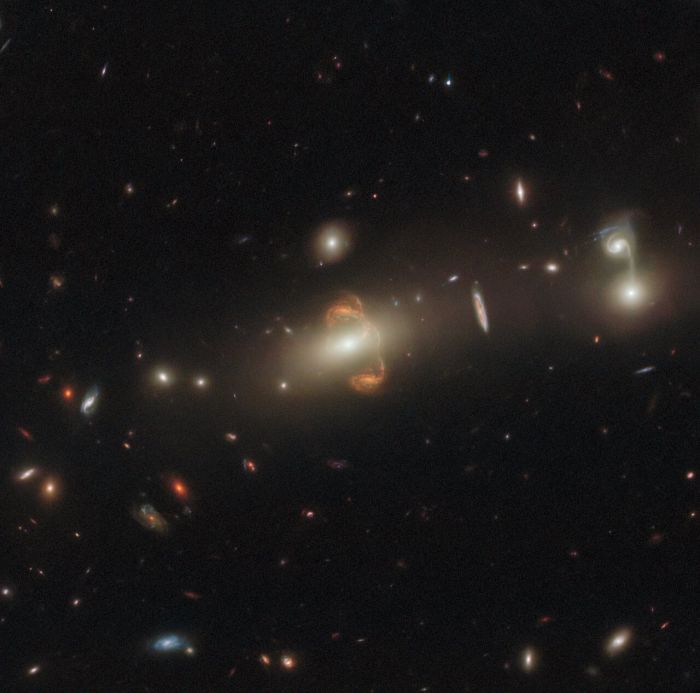 SGAS J143845+145407 is scientifically interesting because it's a luminous infrared galaxy, glowing relatively brightly due to high star formation activity. Studying galaxies like it can help scientists understand star formation and how it has changed throughout the Universe's history; for this kind of work, gravitational lenses can be invaluable.

Using the gravitational lens, scientists were recently able to reconstruct the distribution of star formation in SGAS J143845+145407, and study the details of the process. They found that the galaxy is pretty typical of its type, which information will be able to help contextualize and characterize other galaxies.

Webb is expected to reveal even more details, but Hubble revolutionized the study of lensed galaxies. Its observations were the first to resolve details inside lensed galaxies, giving scientists an incredible new window into the early Universe.

The image has been published on the Hubble website.