This Strange Ancient Wasp Found in Amber Was Named After Dracula, And We Can See Why

So you've discovered an unusual winged insect preserved in amber, and it happens to have a superb set of mouth parts dangling from its head.

You could name it after a president's body part, maybe. If not David Attenborough. Again. Or just do what one researcher did with a specimen that doesn't seem to fit in anywhere else – name it after that most famous of bloodsuckers, Dracula.

The tiny 2.5-millimetre (1/10th of an inch) winged fiend is a clear example of a Cretaceous period wasp belonging to a superfamily called Serphitoidea. Unfortunately that was as easy as taxonomy got for this discovery.

It shouldn't have been all that hard. There are just two families making up this group after all, Serphitidae and Archaeoserphitidae. But the tiny insect's family tree could have gone either way, because biology.

Based on the balance of key characteristics, palaeontologist Alexandr Rasnitsyn from the Russian Academy of Sciences and Christoph Öhm-Kühnle from Tubingen University decided Serphitidae would be the better fit in the end.

But thanks to the number of segments making up its antennae, its wing design, mandibles, and a long set of maxillary and labial palpi at either side of its mouth parts, a new sub-category would be needed.

So now we have the brand-new subfamily of Supraserphitinae, an exclusive club of one itty-bitty VIP. And what better name for this lonely long-jawed species than Supraserphites draculi? Just look at this thing. 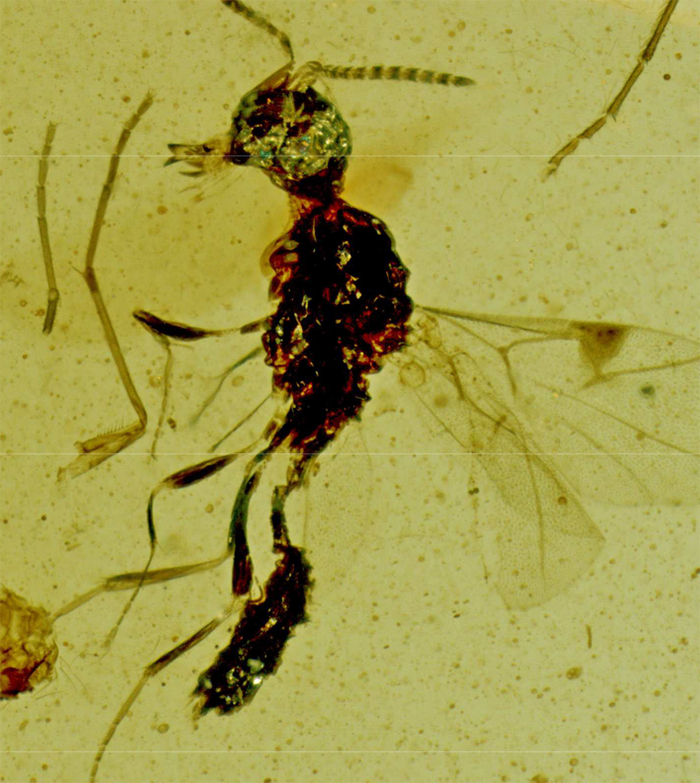 Exactly how it might have used its vampiric-looking mandibles and dangling palpi is anybody's guess, though we might want to rule out unholy blood-sucking rituals for now.

A clue might be found among other members of the Serphitoidea superfamily. Described as parasitoid, it's likely they laid their eggs in a host to provide their larvae with a nutritious early breakfast on hatching.

Sure, it's not quite like the undead turning a fresh host into a new creature of the night, but as far as the animal kingdom goes, letting your young chew their way out of an unsuspecting victim is pretty darn close.

The rock surrounding the amber was previously dated to just under 100 million years old. For perspective, wasps and their kind have their roots in fossils that date back at least 270 million years, so Dracula's namesake isn't setting any new records.

But the unusual find does help us better understand the geological history of the south-east Asian region.

The chunk of amber containing the wasp was pulled from a mine in Myanmar's Hukawng Valley, an area well known for beautifully preserved fossils, including the oldest example of a bee found to date.

Along with a host of other unique insects trapped in amber around the same time, the evolutionary off-ramp represented by S. draculi heavily implies its ecosystem has been isolated for a while.

For what it's worth, this sole specimen of a tiny wasp happens to have female anatomy, so perhaps the rather masculine-sounding Dracula is a little questionable after all.

This research was published in Cretaceous Research.