In the extreme cold and dark of an Antarctic winter, a remote research base seemingly cut off from the world is still running as normal – even though scientists were forced to evacuate it months ago.

The Halley VI Research Station, located on Antarctica's Brunt Ice Shelf, is designed for year-round habitation by scientists, but in recent years, fears over cracks in the shelf have led to closures during the Antarctic winter.

For Halley VI, these annual abandonments are only a temporary safety measure for research staff stationed at the facility, but evacuated or not, it doesn't mean the important science conducted here comes to a stop. 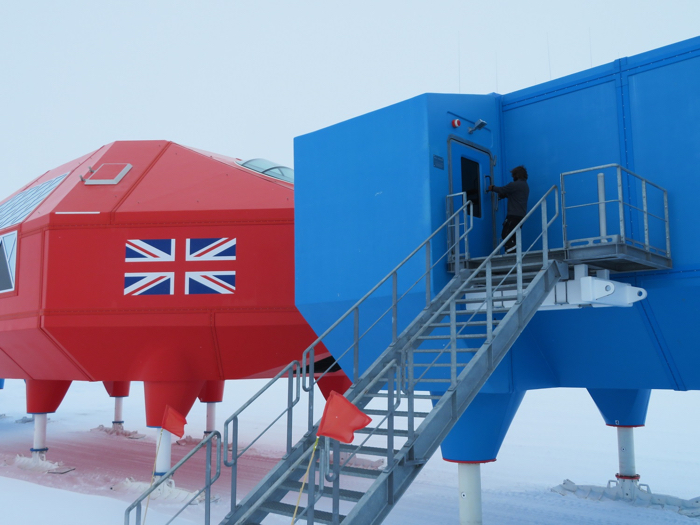 Above: Halley Station leader Richard Warren closing the door on the facility for the 2019 Antarctic winter.

Last week, researchers from the British Antarctic Survey (BAS) announced that for the first time ever during one of these winter shutdowns, Halley VI kept successfully running its climate, ozone, and space weather measurements – even though a human hasn't set foot in the station since February.

"We were confident we had a good design, but Antarctic winter conditions are brutal, so you never know exactly what might happen," says BAS atmospheric scientist Thomas Barningham.

"So far the systems have operated in temperatures as low as – 43ºC and withstood wind speeds of up to 43 knots."

During these closures, the evacuated facility – evocatively described as a 'ghost base' by Live Science – keeps operational thanks to an autonomous power system that delivers electricity to the station's scientific instruments.

The core of the automation platform is a micro-turbine installed in a temperature-controlled container, which runs on an autonomous fuelling system to keep Halley VI and all its monitoring devices running. The micro-turbine – which the researchers liken to a "jet engine in a box" – needs to keep spinning 24/7 without servicing for nine months for Halley VI to keep the lights on until field researchers return in November.

It's a tall order, but so far the autonomous platform has kept the station powered for 136 days, and the BAS team is confident it can see the winter out, while keeping a range of meteorological, ozone, and atmospheric monitoring instruments operational, while transmitting 1GB of data back to researchers in the UK daily.

Among these tools is an instrument called the 'AutoDobson', a fully automated version of the device that enabled the Halley Research Station to originally discover the ozone layer hole back in the 1980s (during its Halley IV iteration).

It's those kind of discoveries that remind us of the incredible importance of keeping scientific instrumentation switched on – especially in extreme environments deemed too unsafe for human researchers to tread.

For the BAS team, this years's unbroken up-time during an unoccupied winter closure represents a chance to get Halley VI back to where it should be, after two offline winters in 2017 and 2018.

"We've been measuring column ozone at Halley since the 1950s and so those two lost winters of data hang heavy on my heart, they really do," BAS director of science David Vaughan told the BBC.

"So, I'm really proud of the position we're now in."