Across 10 Million Stars, Not a Single Whisper of Alien Technology

In a comprehensive search of a patch of the Southern sky, not even a hint of alien technology has been detected at low radio frequencies.

Across at least 10 million stars that populate the Vela region - the deepest and widest survey for extraterrestrial intelligence yet - the Murchison Widefield Array (MWA) in Australia found none of the technosignatures that might be expected within its range.

However, astronomers Chenoa Tremblay and Steven Tingay from the Curtin University node of the International Centre for Radio Astronomy Research (ICRAR) say their results aren't disappointing at all.

Instead, the research shows how easy it is to conduct the search for extraterrestrial intelligence (SETI) almost incidentally, while obtaining other astrophysical observations.

SETI is really quite tricky. We don't really know what kind of technology an alien civilisation could develop, so we base it on what we know - our own technology, and theories. In the case of the MWA, that means radio signals in frequencies similar to FM radio.

Here on Earth, very low frequency radio can "leak" out through the ionosphere - it's been picked up by our own space probes, as heard in the above audio, recorded by a NASA Polar spacecraft in 1996. More recently, these VLF emissions have been found to be creating a giant bubble around our planet.

If aliens are also producing such signals, and if those signals are powerful enough, researchers believe that we might be able to detect them. However, if we could, it's not with the MWA, and not in the vicinity of the Vela constellation.

"The MWA is a unique telescope, with an extraordinarily wide field-of-view that allows us to observe millions of stars simultaneously," Tremblay said.

"We observed the sky around the constellation of Vela for 17 hours, looking more than 100 times broader and deeper than ever before. With this dataset, we found no technosignatures - no sign of intelligent life."

The constellation of Vela may only seem like a small patch of sky when you're standing down here looking up, but it's a lot busier than it appears. It contains the Vela supernova remnant - that's what Tremblay has been studying, looking specifically at the chemical composition of the cloud in low frequencies.

And the region studied has at least 10 million stars at a variety of distances, a little slice of the Milky Way galaxy, which overall has an estimated number of stars somewhere between 100 and 400 billion (or possibly even higher, depending on whom you ask).

Therefore, it's not really a huge surprise that no signals were detected.

"As Douglas Adams noted in The Hitchhiker's Guide to the Galaxy, 'space is big, really big'," Tingay said.

"And even though this was a really big study, the amount of space we looked at was the equivalent of trying to find something in Earth's oceans, but only searching a volume of water equivalent to a large backyard swimming pool."

There are other reasons we may not detect techno-signatures. There's the point mentioned earlier - that alien technology might not be anything like our Earth technology; that it may be something we can't even hypothesise existing. But that's why we have to look with every tool we have at our disposal.

"Since we can't really assume how possible alien civilisations might utilise technology, we need to search in many different ways. Using radio telescopes, we can explore an eight-dimensional search space," Tingay said.

"Although there is a long way to go in the search for extraterrestrial intelligence, telescopes such as the MWA will continue to push the limits - we have to keep looking." 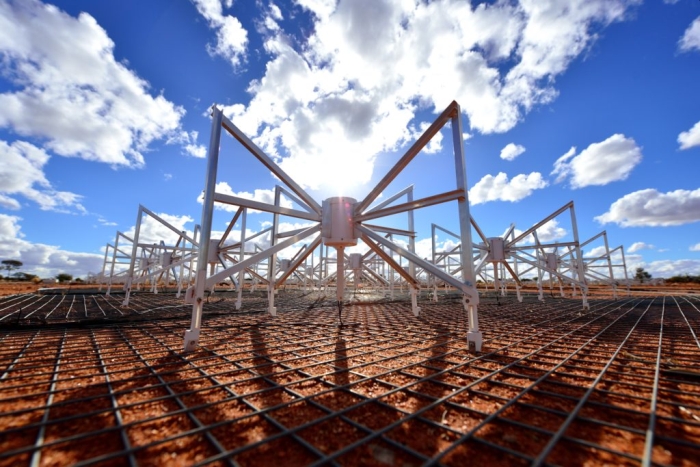 The MWA consists of 4,096 of these dipole antennas. (Dragonfly Media)

For all you alien fans out there, the lack of evidence doesn't necessarily mean a lack of alien civilisations. It's also possible that any electromagnetic radiation an alien civilisation emits could be too far away, or too weak to detect.

Take Earth, again, as our only known example. We've only been generating deliberate radio waves since, at the earliest, the first radio transmission in 1895. At a maximum, our transmissions couldn't have travelled much farther than 100 light-years away.

Radio waves grow less intense over distance, following the inverse-square law. At double the distance travelled, the signal is a quarter of its intensity at the starting point. By 100 light-years away, Earth's radio waves would be indistinguishable from background noise.

But, with ever more powerful telescopes - like the Square Kilometre Array (SKA) being built in Western Australia and South Africa - who knows what we could find?

"Due to the increased sensitivity, the SKA low-frequency telescope to be built in Western Australia will be capable of detecting Earth-like radio signals from relatively nearby planetary systems," Tingay said.

"With the SKA, we'll be able to survey billions of star systems, seeking technosignatures in an astronomical ocean of other worlds."

The research has been published in the Publications of the Astronomical Society of Australia.