In the gloom of subterranean tunnels, chonky little mole-rats build their nests, tucked safely away, deep inside the earth. Strangely, one species always carefully builds these nests in the south-eastern part of their den.

Why they do this remains unclear, but even in total darkness, it seems, these burrowing rodents – animals that can barely see in the best of conditions – can still sense direction.

We've long known animals like birds can sense magnetic fields, and recently discovered dogs navigate via them too. But the biological mechanisms behind this sense – and how it might function in mole-rats – are still very much a mystery. We didn't even know where in the body these magnetic detectors, whatever they prove to be, are located.

A recent theory suggests this sensory ability may somehow occur via magnetotactic bacteria living within these species. But so far clues about mole-rats' magnetoreceptors suggest that their mechanism is magnetite-based.

This sense of Earth's magnetic field works independent of light, and is affected by strong magnetic pulses but not radio frequencies, explain researchers from the University of Duisburg-Essen in Germany. They've been studying Ansell's mole-rat (Fukomys anselli) to learn more about how this sensory mystery works.

Ansell's mole-rat is a highly cooperative social species that lives in colonies of around 10 individuals and builds the longest known tunnel of any (non-human) mammal. They may even be friendly with their neighbours, with some colonies linked by joining tunnels. 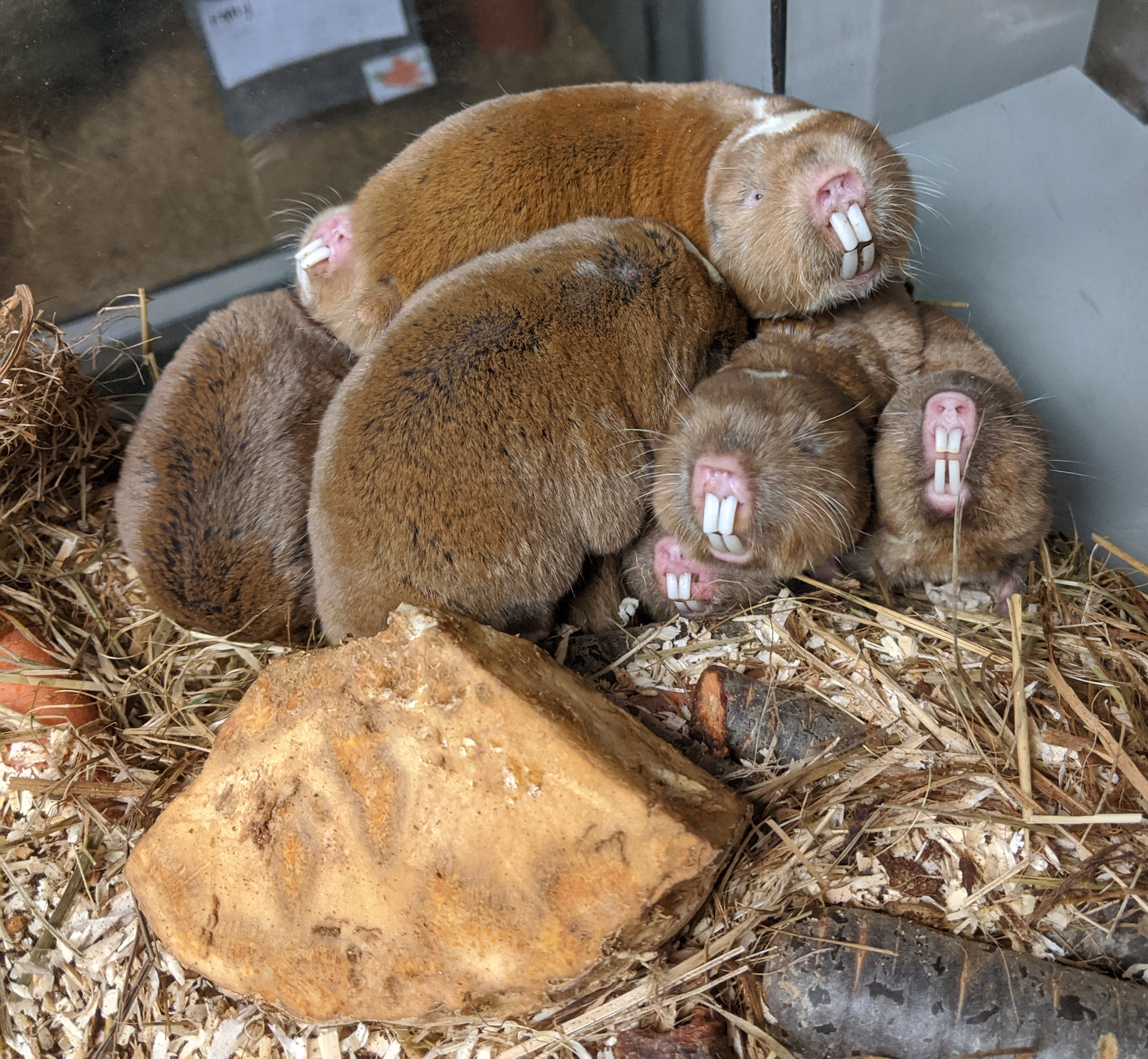 A cuddle pile of mole-rats in the lab. (Kai Robert Caspar)

These fuzzy tubes with legs have a stubby little tail at one end, with large teeth jutting out over closed lips at the other end. Their strange lower-jaw incisors can move independently of each other. As well as their usual tasks, the mole-rats spar with these teeth when play-fighting.

Above their teeth are the organs of interest - miniscule eyes, up to just 2 mm in diameter. These eyes can't see much at all, only really being able to detect the difference between light and dark.

"They do not orient by vision," zoologist and lead author Kai Caspar told New Scientist. "Vision is more or less completely unimportant for them."

A previous study found disrupting the function of the eyes using anaesthesia destroyed the mole-rats' ability to place their nests in their preferred location, while still allowing them to detect light and shadows. They couldn't rule out that the anaesthesia wasn't entering the bloodstream and impacting other organs though.

So, Casper and colleagues decided to try a more definitive approach to confirming the location of the animals' magnetoreceptors.

Unfortunately for the laboratory mole-rats, this involved surgically removing the eyes of some of the study subjects (a process called enucleation). Tests 1.5 years after the surgical procedure confirmed, however, that these individuals' everyday behaviours were no different from the other captive mole-rats, including digging, grooming each other, and play-fighting.

"All enucleated animals were fully immersed members of their respective family groups and many successfully bred and raised offspring," the team write in their paper.

Once this was established, the researchers created nesting terraria where they could precisely control the magnetic field.

The team then tested the animal's nest building in four different magnetic field alignments, to rule out responses based on topography. They found control animals that still had their sight displayed their usual clear preference for building their nests in the magnetic south-eastern part of the arena, whereas those without eyes built them in random locations.

"We conclude that the removal of the eyes led to a permanent impairment of the magnetic sense," the team write. "Our study is the first to identify a magnetoreceptive organ in a mammal."

Caspar and team suggest the eyes be closely examined under electron-microscopy and through spectroscopy to find these elusive mammalian magnetoreceptors.

This research was published in the Journal of the Royal Society Interface.