Water is essential for basic human survival. But it can also be dangerous; contaminated water can spread deadly diseases that have the potential to eradicate whole communities. Safe, clean water offers humanity one of its best chances to thrive.

Several ancient civilisations, including the Greeks, Egyptians, and Romans, filtered their water. Sanskrit writings dating back to 2,000 BCE also mention water treatment methods. Now, archaeologists have discovered the Maya of Central America did too – and their water filtration system was incredibly effective.

In a reservoir in what was once the major Maya city of Tikal, the ruins of which crumble in a rainforest in present-day Guatemala, archaeologists have found zeolite and quartz – minerals that are not local to the area, and which are both effective at helping remove contaminants such as microbes, heavy metals, and nitrogen compounds from water.

So effective, in fact, that they are both used in water filtration systems today.

"What's interesting is this system would still be effective today, and the Maya discovered it more than 2,000 years ago," said anthropologist Kenneth Barnett Tankersley of the University of Cincinnati.

Zeolite, in particular, is interesting. It's a natural crystalline compound of silicon and aluminium, linked via shared oxygen atoms to form an open crystal lattice. It has excellent absorption and ion exchange properties, which makes it very effective at filtering water.

But, although the ancient Greeks and Romans used it as a pozzolan – an ingredient for cement – in aquatic structures such as bridges and aqueducts, archaeologists thought that zeolite hadn't been used for water filtration until around the beginning of the 20th century.

"The apparent zeolite filtration system at Tikal's Corriental reservoir is the oldest known example of water purification in the Western Hemisphere," the authors wrote, "and the oldest known use of zeolite for decontaminating drinking water in the world."

The ability to have clean water was of deep importance to the Maya, and of great concern, particularly to Tikal. The city's only water source was 10 reservoirs. Given the large population, and the highly variable climate that went through periods of seasonal drought, their drinking water was prone to contamination from both microbes and cinnabar, or mercury sulfide, a pigment the Maya used heavily.

It stands to reason that they had some means of keeping the water clean. So Tankersley and his team went to investigate. They studied three of the largest reservoirs in the ancient city, as well as a local sinkhole as a control for mineral composition.

The discovery was made in the Corriental reservoir, an important source of drinking water for the residents of Tikal, and one of the largest drinking water reservoirs in use by the Maya for over a thousand years. Mixed in among the sediment at the bottom of the reservoir, the team found what they were looking for: zeolite and coarse quartz sand.

The zeolite was found only in the Corriental reservoir. There's no way it could have just happened to be there when the reservoir was dug.

In fact, the team believes that the mineral was quarried from a site some 30 kilometres (18 miles) northeast of Tikal. There, volcanic rock forms an aquifer known to produce exceptionally clear water. University of Cincinnati geographer Nicholas Dunning was familiar with the area after previously conducting fieldwork there.

"It was an exposed, weathered volcanic tuff of quartz grains and zeolite. It was bleeding water at a good rate," Dunning said. "Workers refilled their water bottles with it. It was locally famous for how clean and sweet the water was."

The team compared the Corriental quartz and zeolite from material taken from the aquifer and found that the two were a very close match. They also used radiocarbon dating to determine the age of the sediment and dated it to between 2,185 and 965 years ago.

It's impossible to know exactly how the filtration system worked, but putting together the evidence, the team believes that it has a pretty good picture. 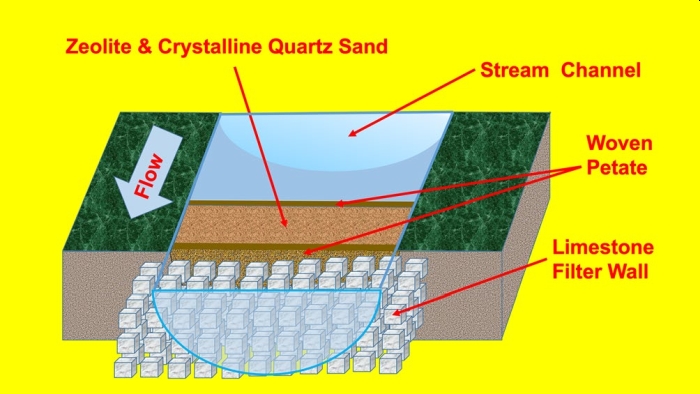 "The filtration system was likely held behind dry-laid stone walls with the zeolites and macrocrystalline sand-sized quartz crystals further constrained with woven petate (woven reed or palm fibre matting) or other perishable porous material positioned just upstream of, or within the reservoir ingresses, which were periodically ejected into the reservoir during flash floods caused by tropical cyclones," the researchers wrote in their paper.

And it seems to have worked. Mercury deposits, likely from cinnabar contamination, had previously been found in several other Tikal reservoirs. Not a trace of it could be detected in Corriental.

"The ancient Maya lived in a tropical environment and had to be innovators. This is a remarkable innovation," Tankersley said.

"A lot of people look at Native Americans in the Western Hemisphere as not having the same engineering or technological muscle of places like Greece, Rome, India, or China. But when it comes to water management, the Maya were millennia ahead."