Ever since Pluto lost its planet status back in 2006, most of us have been waiting for the day scientists change their minds and restore it. Last month, we had new hope that might happen, with NASA researchers proposing a new, broader definition for a planet.

But now astrophysicist and Forbes science columnist Ethan Siegel has crushed that hope somewhat, penning a thorough takedown of why, scientifically speaking, Pluto won't ever be a planet again. Warning: those of you still in denial about our former ninth planet should probably brace yourselves.

According to Siegel, who's a professor of physics and astronomy at Lewis & Clark College in Portland, Oregon, Pluto might be one of the most-loved objects in our Solar System, but that doesn't mean it's eligible for planet status.

In fact, trying to make it a planet again could hurt scientific progress going forward.

"There's something very meaningful about our place in the Solar System that makes Earth a planet and Pluto not-a-planet. If we're being honest about our Solar System and the number of planets within it, there are very clearly eight objects that are different from all the others," he added.

For those who aren't up to date on Pluto's planetary status, let's refresh.

Pluto was discovered back in 1930, hiding in the asteroid belt at the edge of our Solar System. At the time, it was thought that Pluto was more massive than Earth, but over the years, observations revealed that our 'ninth' planet was actually a lot smaller than we thought - just half the size of Mercury.

Then, in the 1990s, researchers began discovering other trans-Neptunian objects - small objects in our Solar System orbiting the Sun past Neptune. And they weren't all that different to Pluto.

On the back of these new discoveries, the International Astronomical Union (IAU), which defines the objects in our Universe, changed the official definition of a "planet" in 2006, and Pluto was downgraded to a dwarf planet.

The 2006 definition for a planet in our Solar System states:

It's that third point that Pluto fails on.

But here's where things get controversial - that definition is pretty problematic in itself. Firstly, it only defines a planet as existing around our own Sun (and as we know, there are plenty of other planets around extrasolar systems).

And, as Siegel explains:

"'Clearing its orbit' seems pretty subjective and dependent on what else is out there. (If you were to place Jupiter too distant from the Sun, it would fail to clear its orbit; would it therefore stop being a planet?).

Even if you replaced 'the Sun' with 'its parent star', it isn't like we can measure exoplanetary systems well enough to tell whether their orbits are cleared or not. The definition isn't precise enough."

Which is why, for the past decade, members of the public (and some scientists) have held out hope that maybe the definition of a planet will be updated, and Pluto will be reinstated.

In fact, last month, NASA scientists wrote up a new definition of a planet for submission to the IAU, and according to their criteria, not only would Pluto be back in the fold, but so would our Moon and more than 100 other Solar System objects.

The big difference is that, instead of an astronomical perspective, these scientists are coming from a geophysical one.

They say that cosmic bodies in our Solar System don't need to be orbiting the Sun to be considered planets - we should be looking at their intrinsic physical properties, rather than their interactions with stars.

"In keeping with both sound scientific classification and peoples' intuition, we propose a geophysically-based definition of 'planet' that importantly emphasises a body's intrinsic physical properties over its extrinsic orbital properties," the researchers explain.

According to their definition:

"A planet is a sub-stellar mass body that has never undergone nuclear fusion and that has sufficient self-gravitation to assume a spheroidal shape adequately described by a triaxial ellipsoid regardless of its orbital parameters."

Under that definition, Pluto would make the cut. But Siegel doesn't think geophysics alone is anywhere near specific enough.

"In our efforts to include Pluto, we include every non-stellar object more massive than about 0.01 percent of Earth's mass," Siegel writes.

But he thinks there is a happy medium. If we take into account several of the suggested definitions for planets out there - including the geophysical definition - and also look at some of the more recent solar systems we've found, such as the recently discovered TRAPPIST-1 system, we can get a more specific definition.

In addition to the geophysical definition above, Siegel also suggests the following requirements for a planet:

When you use that definition, the line becomes a lot less fuzzy. In fact, researchers have actually made a mathematical relationship between an object's mass and its orbital distance that can be applied to any star.

You can see that formula applied to our own Solar System below, in a 2015 paper in the Astronomical Journal by Jean-Luc Margot, an astrophysicist at the University of California, Los Angeles.

Anything above the line is a planet, and anything below it isn't - and, as you can see, the case is pretty grim for Pluto: 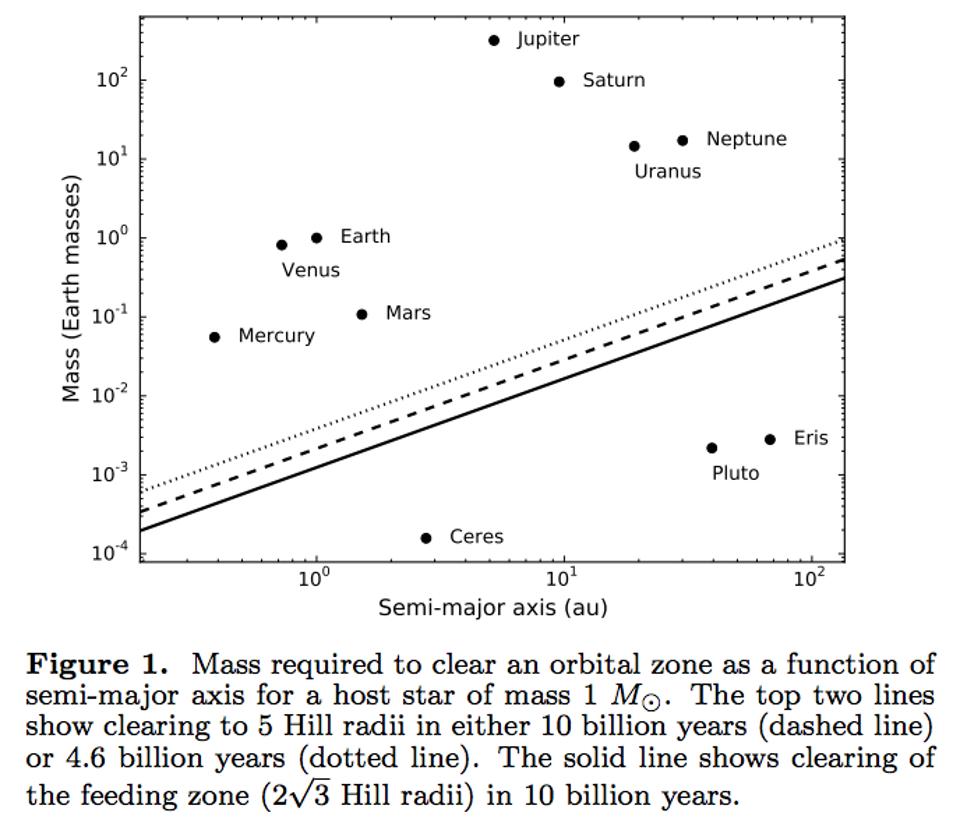 Of course, this is just the opinion of one group of researchers. Other scientists, including the authors of the proposal put forward last month, still firmly believe there's room for Pluto at the planetary table.

In the coming years, one thing that might sway the debate either way would be the potential discovery of so-called Planet Nine - a huge, hypothetical cosmic body lurking at the edge of our Solar System.

Until then, let's not get too depressed about Pluto's missing planetary status. Science needs these types of definitions to expand as our knowledge grows.

And, you never know, Pluto might one day be redefined as something even more fascinating, as we learn more about the strange types of objects that are out there lurking in space.