Scientists at the Kaloko-Honokohau National Historical Park are doing some great work. They're looking after the park on Hawaii's Big Island, and showing off the little critters they find on their Facebook page along the way.

But back in August, while the park's marine biologists were conducting coral reef monitoring, they found a doozy – when they picked up some floating plastic debris, there was a tiny octopus among the trash. 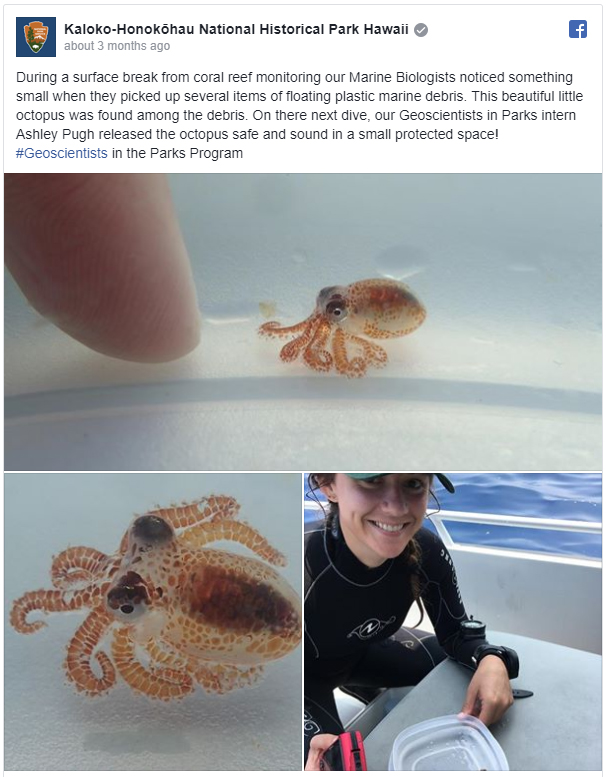 Although a Facebook post about the tiny octopus got a bit of traction, the cephalopod really became a star when the US Department of the Interior tweeted about them this week.

The park's marine ecologist Sallie Beavers told The Associated Press that she thinks it was either day (Octopus cyanea) or night octopus (Callistoctopus ornatus) – both species which are found off Hawaii.

Who knew an octopus 🐙 could be so cute! Biologists found this little one while monitoring coral reef at Kaloko-Honokōhau National Historical Park and later released it safe and sound #Hawaii #FindYourPark pic.twitter.com/zh7XKjAVKD

Both of those species can grow to quite large sizes, with night octopus growing up to several kilograms with an arm span of up to 2 metres (6.5 feet).

But this baby one was only the size of a pea.

Don't stress though – this one has every chance of making it to an adult – the researchers let it go not long after.

"On there [sic] next dive, our Geoscientists in Parks intern Ashley Pugh released the octopus safe and sound in a small protected space," the researchers wrote in the Facebook post.

That affects everything from wholesome tiny octopuses to us.

But as the team commented on the post later, these babies are not quite as wholesome as they look. "Another baby octopus taken by the dive team (again found on plastic debris) attacking and killing a baby crab," they wrote.

"Maybe they aren't so cute?"

We'll let you be the judge.