The 1,000-year-old mask that was analyzed. (Journal of Proteome Research)

A thousand years ago, in what is now Peru, a middle-aged man was entombed amid a wealth of golden artifacts.

His tightly scrunched-up body was turned upside-down, his head detached and placed close by. On his face was a delicate metal mask, with large decorative earrings and bulging beaded eyes. Both the mask and skeleton were streaked red.

The red pigment was identified as cinnabar when the mask was first discovered 30 years ago, but researchers led by University of Oxford chemist, Elisabete Pires, were curious to understand what bound the paint together. Their investigation revealed a little more than they were expecting: human blood.

Predating the renowned Incas, the Lambayeque culture, or Sicán as it's also known, lived along the northern coast of Peru between the 8th and 14th centuries. With their advanced metallurgy skills they produced many dazzling golden objects. Above: Used to cut the throat of sacrificial victims, ceremonial knives like these were also found in Sicán tombs.

The 1,000-year-old metal mask was found at the bottom of a deep shaft, known as the East Tomb of the Huaca Loro temple mound. The skeleton wearing it was once a 40-50-year-old man, buried with 1.2 tons of grave goods, many of which were gold-silver-copper alloys, equivalent to our 14-18 karat modern gold jewelry.

Many of the known artifacts from these parts of human history have been looted and tampered with, so this tomb, which was excavated by archeologists in the 1990s, provides scientists with a rare opportunity to analyze untainted Sicán culture.

Using mass spectrometry and proteomics, Pires and colleagues identified a number of proteins, including the egg white protein albumin. So eggs – possibly from the Muscovy duck, which they also ate – were likely what the Sicáns used to bind the paint together and allow it to stick to surfaces, like the bones and metal masks.

"Interestingly, among the remaining proteins, six are found in human blood," the team writes in their paper. These included serum albumin, and the antibody immunoglobulin G.

So along with the red pigmented mercury sulfide mineral, cinnabar, researchers speculate that the Sicán people may have used human blood in the paint, to represent the force of life.

That, along with "the unique inverted placement of the skeleton next to the two young adult women in parturition and midwifing poses suggests that the desired effect was the rebirth of the deceased leader," Pires and colleagues explained of the burial. 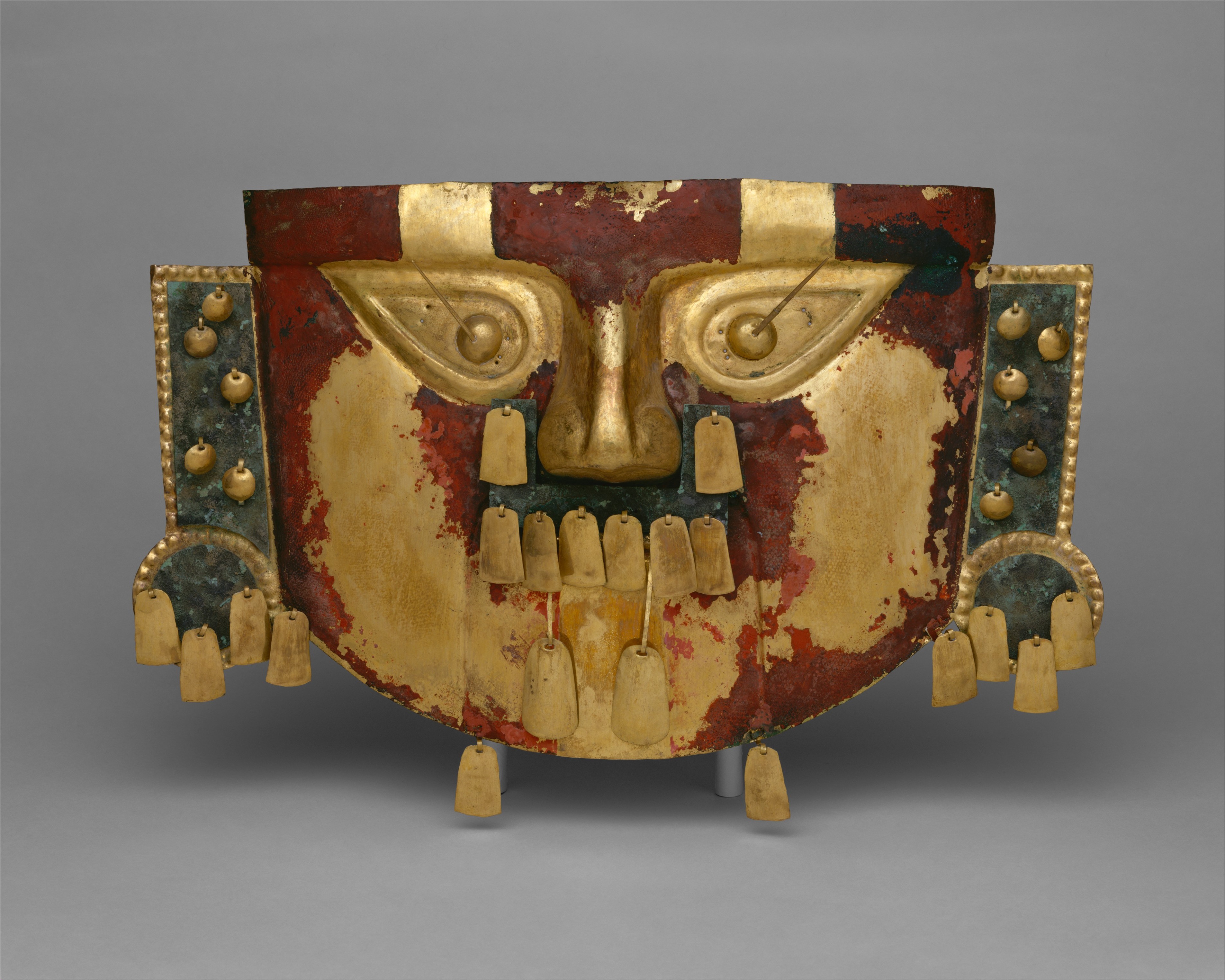 Another example of a Sicán funerary mask painted red. (The Met Museum)

Early colonial accounts from the region have suggested the red paint on the masks emulated the patterns of face paint worn by important Sicán individuals. Their face paint was maintained by courtiers.

As their samples were limited, the researchers can't verify if the blood was only present in the paint, rather than an incidental contamination from the mask's surroundings.

The lack of fats in the paint leaves some questions, given their presence in human blood. But lipids should also be there from the egg whites too, so they may have degraded or chemically reacted with other molecules, making them harder to detect.

However, other known Sicán practices support the idea that the blood could indeed have been an intentional paint component.

"A recent osteological study of human sacrificial victims from Sicán indicated that many were cut particularly on the neck and the upper chest in a systematic manner to maximize bleeding," the team explained.

Their research was published in the Journal of Proteome Research.