A 3,500-Year-Old Tomb Full of Mummies Has Just Been Discovered in Egypt

Egyptian archaeologists have announced the discovery of a tomb dating back some 3,500 years to the dawn of ancient Egypt's New Kingdom, during a period called the 18th Dynasty.

The famous era, which produced the pharaoh Tutankhamun and queen Nefertiti, also witnessed the life and death of this tomb's principal inhabitant, a nobleman called Amenemhat, who spent his days as a jeweller and goldsmith.

Amenemhat lived sometime between 1567 BC to 1320 BC, and his newly discovered resting place was found in the necropolis of Dra' Abu el-Naga' – near the Valley of the Kings, where pharaohs during the New Kingdom built their crypts.

While living, Amenemhat worked in the city of Luxor – 500km (310 miles) south of Cairo, 7km (5 miles) from the Valley of the Kings – crafting golden finery for ruling elites including the royal family.

His own tomb, located nearby on the west bank of the river Nile, may not have been fit for the Valley of the Kings, but the necropolis he was buried in was nonetheless reserved for people of high standing, including noblemen and government officials. 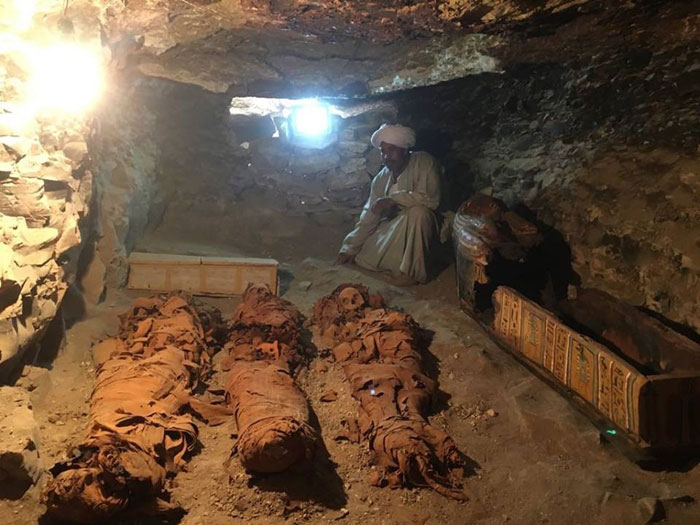 But while researchers say there's no question this is Amenemhat's tomb – evidenced by a large sculpture of the goldsmith and his wife in a recess in the crypt, seated next to a smaller statue of their son – his own remains have not yet been positively identified within it.

So far, archaeologists have found two burial chambers in the crypt, which contain mummies, sarcophagi, wooden funerary masks and statues, and pottery.

In one of the chambers lie the remains of three mummies with their skulls exposed, but as for whether these are Amenemhat's family members isn't clear.

That might be because while this is the first time in recent history the tomb has been discovered, it's not the sole instance of the resting place being disturbed. "We are not sure if these mummies belong to Amenemhat and his family," lead archaeologist Mostafa Waziri explained to The New York Times.

"Others have clearly reused this tomb and poked around in ancient times. That's probably why their heads are uncovered."

It's thought the tomb was reused later, during the beginning of the Third Intermediate Period (1070 BC to 664 BC), which is when other mummies from the 21st and 22nd dynasties were buried within the crypt.

While the research is ongoing, the team says one of the mummies – that of an approximately 50-year-old woman, found beside the remains of her two children – shows initial signs of having died from diseases, including a bacterial disease that affected her bones.

Researchers think continued investigations will turn up a lot more discoveries at the site. Fifty grave identifiers called funerary cones have so far been discovered near the tomb, but at present, 40 belong to four other officials whose bodies have not yet been discovered. "This is a good sign," Waziri told media at the announcement of the findings.

"It means if we keep digging in this area we're going to find four more tombs."

Not only will such discoveries help to boost Egypt's lagging tourism sector, but they could help provide more vital clues about the people who lived in this fascinating period of ancient human history.

The team is teasing that they may have more exciting news to announce next month.

As for what that will be, nobody's entirely sure, but according to former Egyptian minister of antiquities, Zahi Hawass, we've only scratched the top of the surface so far.

"Modern Egypt is built on top of ancient Egypt," he told The Guardian.

"Until now we've only found 30 percent of the Egyptian monuments; 70 percent is still buried."