Another Cable Just Broke at The Iconic Arecibo Telescope, And Scientists Are Worried

For the second time in only a matter of months, a cable accident has occurred at the Arecibo Observatory in Puerto Rico, causing yet more damage to one of the world's largest and most powerful radio telescopes.

In August, astronomers and science-lovers alike were aghast to see a giant hole ripped through the facility's massive reflector dish, resulting from a broken auxiliary cable that fell and smashed into the structure, leaving an ugly gash measuring 30 metres (100 feet) long.

In the months since, engineers and workers at the observatory have been making preparations for a complex repair job, with work initially scheduled to begin this week. Unfortunately, a second cable failure taking place on Friday evening local time has now complicated the situation further.

"This is certainly not what we wanted to see, but the important thing is that no one got hurt," says director of the observatory Francisco Cordova.

"We have been thoughtful in our evaluation and prioritised safety in planning for repairs that were supposed to begin Tuesday. Now this." 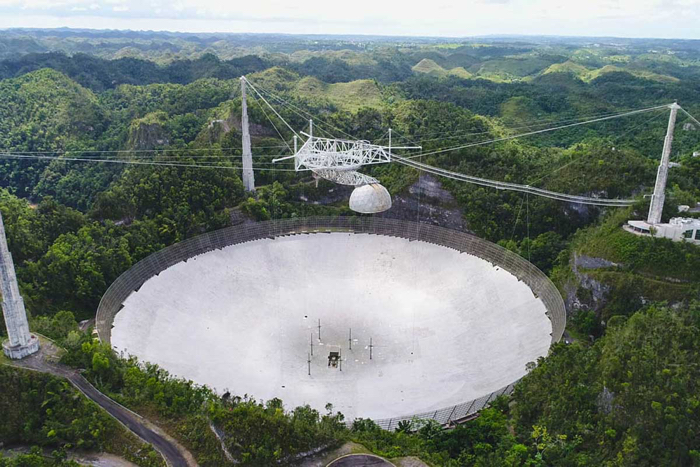 The Arecibo Observatory in 2019, before this year's accidents. (UCF)

According to the University of Central Florida (UCF), which operates the Arecibo Observatory on behalf of the National Science Foundation, the second cable incident appears to bear some relation to the first.

Both cables were connected to the same support tower, and it's possible the second break was triggered by additional strain after the first failure.

Observers at the facility had been monitoring all the cables since the accident in August, and had noted wires breaking on the cable that snapped last week, presumably due to fraying from the extra load. Unfortunately, before any remedial stop-guards could be put in place, the second cable also gave way, falling onto the dish, causing additional damage to it, and also damaging nearby cables.

Working in conjunction with engineers brought in to assess the situation, UCF is expediting the repair plan underway, with a view to reducing the tension on remaining cables as quickly as possible. Two new cables are already on their way to the observatory, and the team will continue evaluating the structure while they wait for the parts to arrive.

"There is much uncertainty until we can stabilise the structure," Cordova says. "It has our full attention. We are evaluating the situation with our experts and hope to have more to share soon."

What makes the whole repair and fortification project even more challenging is Arecibo's age: the historic facility was built in the 1960s, and held the title of the world's largest single-aperture radio telescope for over a half-century – until it was superseded by China's even more humongous Five hundred metre Aperture Spherical Telescope (FAST), which began its testing phase in 2016 and achieved full operational status in January.

During its long-running service, the Arecibo facility has notched up dozens of astronomical milestones, observing and recording new scientific measurements of distant exoplanets, asteroids, pulsars, radio emissions, and molecules in far-flung galaxies.

The observatory has also been at the forefront of the Search for Extra-Terrestrial Intelligence (SETI), and was the transmitter of the Arecibo message, a pioneering attempt in 1974 to broadcast an interstellar radio signal.

It may have been eclipsed by FAST in terms of its size, but the Arecibo Observatory nonetheless is expected to have decades of discoveries left in it, but only if its serious and seemingly mounting structural issues can be fixed.

"This is not good, but we remain committed to getting the facility back online," Cordova says. "It's just too important of a tool for the advancement of science."

That's certainly true, but for an ageing facility that's been operational since before humanity visited the Moon, it's hard to know for sure just how serious the damage is, and how fortifiable or repairable the structure will ultimately be, let alone if other accidents happen in the short term.

Here's hoping for a positive outcome, and that emergency measures can stabilise this pillar of 20th century astronomy. But even before these recent cable breakages, the observatory was still receiving repairs for damage caused by Hurricane Maria, which slammed into Puerto Rico in 2017.

"It's not a pretty picture," radio astronomer Joanna Rankin from the University of Vermont told Science. "This is damn serious."