A nova is a dramatic episode in the life of a binary pair of stars. It's an explosion of bright light that can last weeks or even months. And though they're not exactly rare - there are about 10 each year in the Milky Way - astronomers have never watched one from start to finish.

A nova occurs in a close binary star system, when one of the stars has gone through its red giant phase. That star leaves behind a remnant white dwarf. When the white dwarf and its partner become close enough, the massive gravitational pull of the white dwarf draws material, mostly hydrogen, from the other star.

That hydrogen accretes onto the surface of the white dwarf, forming a thin atmosphere. The white dwarf heats the hydrogen, and eventually the gas pressure is extremely high, and fusion is ignited. Not just any fusion: rapid, runaway fusion. 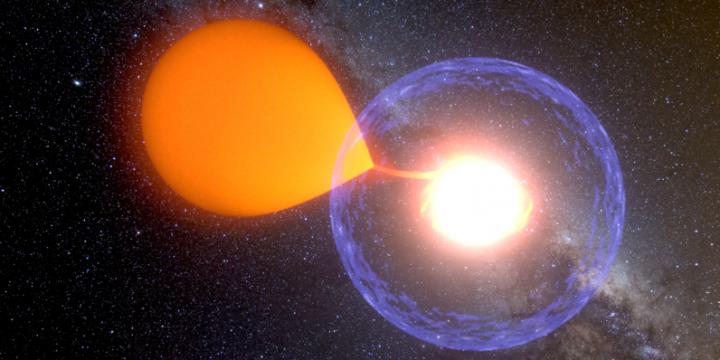 When the rapid fusion ignites, we can see the light, and the new hydrogen atmosphere is expelled away from the white dwarf into space. In the past, astronomers thought these new bright lights were new stars, and the name "nova" stuck.

Astronomers now call these types of nova "classical" novae. (There are also recurrent novae, when the process repeats itself.)

This is an enormously energetic event, that produces not only visible light, but gamma rays and x-rays too. The end result is that some stars that could only be seen through a telescope can be seen with the naked eye during a nova.

All of this is widely accepted in astronomy and astrophysics. But much of it is theoretical.

Recently, astronomers using the BRITE (BRIght Target Explorer) constellation of nanosatellites were fortunate enough to observe the entire process from start to finish, confirming the theory.

BRITE is a constellation of nanosatellites designed to "investigate stellar structure and evolution of the brightest stars in the sky and their interaction with the local environment," according to the website.

They operate in low-Earth orbit and have few restrictions on the parts of the sky that they can observe. BRITE is a coordinated project between Austrian, Polish, and Canadian researchers.

This first-ever observation of a nova was pure chance. BRITE had spent several weeks observing 18 stars in the Carina constellation. One day, a new star appeared. BRITE Operations Manager Rainer Kuschnig found the nova during a daily inspection.

"Suddenly there was a star on our records that wasn't there the day before," he said in a press release. "I'd never seen anything like it in all the years of the mission!"

Werner Weiss is from the Department of Astrophysics at the University of Vienna. In a press release, he emphasized the significance of this observation. 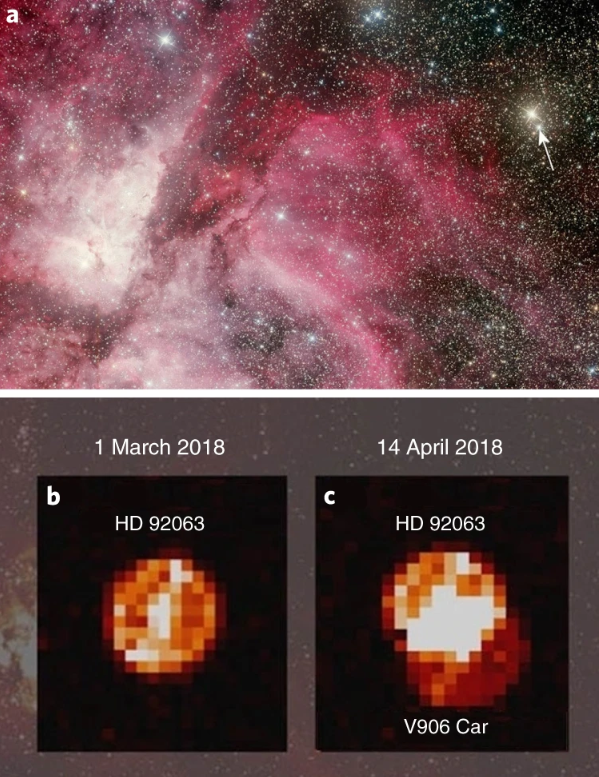 A shows bright V906 Carinae labelled with a white arrow. B and C show the star before and after the V906 Carinae nova. (A. Maury and J. Fabrega)

"But what causes a previously unimpressive star to explode? This was a problem that has not been solved satisfactorily until now," he said.

The explosion of Nova V906 in the constellation Carina is giving researchers some answers and has confirmed some of the theoretical concept behind novae.

V906 Carinae was first spotted by the All-Sky Automated Survey for Supernovae. Fortunately, it appeared in an area of the sky that had been under observation by BRITE for weeks, so the data documenting the nova is in BRITE data.

"It is fantastic that for the first time a nova could be observed by our satellites even before its actual eruption and until many weeks later," says Otto Koudelka, project manager of the BRITE Austria (TUGSAT-1) satellite at TU Graz.

V906 Carinae is about 13,000 light years away, so the event is already history. "After all, this nova is so far away from us that its light takes about 13,000 years to reach the earth," explains Weiss.

The BRITE team reported their findings in a new paper. The paper is titled "Direct evidence for shock-powered optical emission in a nova." It's published in the journal Nature Astronomy. First author is Elias Aydi from Michigan State University.

"This fortunate circumstance was decisive in ensuring that the nova event could be recorded with unprecedented precision," explains Konstanze Zwintz, head of the BRITE Science Team, from the Institute for Astro- and Particle Physics at the University of Innsbruck.

Zwintz immediately realised "that we had access to observation material that was unique worldwide," according to a press release.

Novae like V906 Carinae are thermonuclear explosions on the surface of white dwarf stars. For a long time, astrophysicists thought that a nova's luminosity is powered by continual nuclear burning after the initial burst of runaway fusion. But the data from BRITE suggests something different.

In the new paper, the authors show that shocks play a larger role than thought. The authors say that "shocks internal to the nova ejecta may dominate the nova emission."

These shocks may also be involved in other events like supernovae, stellar mergers, and tidal disruption events, according to the authors. But up until now, there's been a lack of observational evidence.

"Here we report simultaneous space-based optical and gamma-ray observations of the 2018 nova V906 Carinae (ASASSN-18fv), revealing a remarkable series of distinct correlated flares in both bands," the researchers write.

Since those flares occur at the same time, it implies a common origin in shocks.

"During the flares, the nova luminosity doubles, implying that the bulk of the luminosity is shock powered." So rather than continual nuclear burning, novae are driven by shocks.

"Our data, spanning the spectrum from radio to gamma-ray, provide direct evidence that shocks can power substantial luminosity in classical novae and other optical transients."

In broader terms, shocks have been shown to play some role in events like novae. But that understanding is largely based on studying timescales and luminosities. This study is the first direct observation of such shocks, and is likely only the beginning of observing and understanding the role that shocks play.

In the conclusion of their paper the authors write: "Our observations of nova V906 Car definitively demonstrate that substantial luminosity can be produced - and emerge at optical wavelengths - by heavily absorbed, energetic shocks in explosive transients."

They go on to say that: "With modern time-domain surveys such as ASAS-SN, the Zwicky Transient Facility (ZTF) and the Vera C. Rubin Observatory, we will be discovering more - and higher luminosity - transients than ever before. The novae in our galactic backyard will remain critical for testing the physical drivers powering these distant, exotic events."