This Exoplanet Disappeared From Hubble Observations. Now, We Finally Know Why

In 2004 and 2006, the Hubble Space Telescope captured something incredible. There seemed to be a planet orbiting a star called Fomalhaut 25 light-years away, and it was directly detectable in visible light: extremely rare for exoplanets, which are usually too small and faint to be seen.

The object, formally named Fomalhaut b or Dagon, was announced in 2008, and confirmed in 2012, thought to be a gas giant on a 1,700-year, highly elliptical orbit around its host star.

But while examining previously unpublished Hubble images taken back in 2014, astronomers got a shock. The putative planet hadn't just changed. It wasn't that its orbit was not as expected. 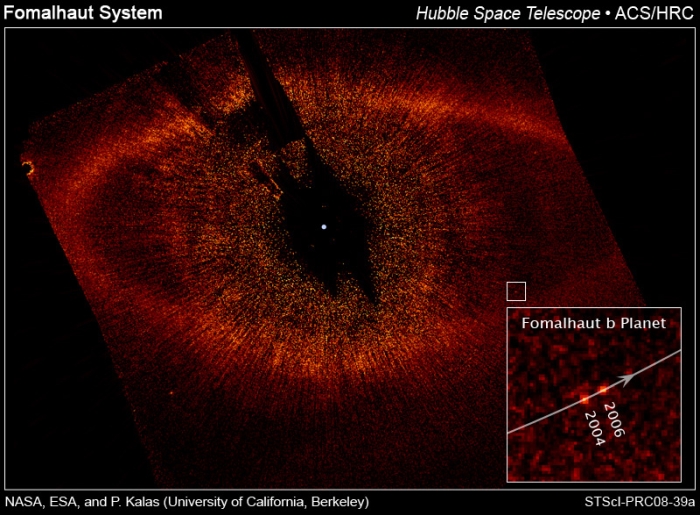 In its place was... nothing, leading astronomers to the conclusion that the spot was never an exoplanet at all. Instead, they now believe the bright spot visible in those early Hubble images was an even rarer sight - the aftermath of a collision between two asteroid-sized planetesimals.

"These collisions are exceedingly rare and so this is a big deal that we actually get to see one," said astronomer András Gáspár of the University of Arizona. "We believe that we were at the right place at the right time to have witnessed such an unlikely event with the Hubble Space Telescope."

The identification of Dagon as an exoplanet was never problem free. Fomalhaut is quite a young star, around 440 million years old, and still surrounded by an icy ring of dust and gas, the remnants of a circumstellar disc.

That means any planets orbiting the star should also be quite young, and therefore warm, emitting infrared radiation - yet no infrared radiation was detected emitting from Dagon. It was also unusually bright in blue optical wavelengths, which isn't consistent with our models of planet formation.

To explain these peculiarities, astronomers proposed that the planet was shrouded by a huge ring or cloud of dust, perhaps as the result of collisions with other objects, or a smaller planet with a huge ring system. Some even proposed that Dagon may be a neutron star.

But none of these explanations were conclusive, and there was another huge problem: Dagon's orbit seemed to cross the ring of debris around the star without disturbing it gravitationally, as a planet should. So astronomers have continued to watch the system. 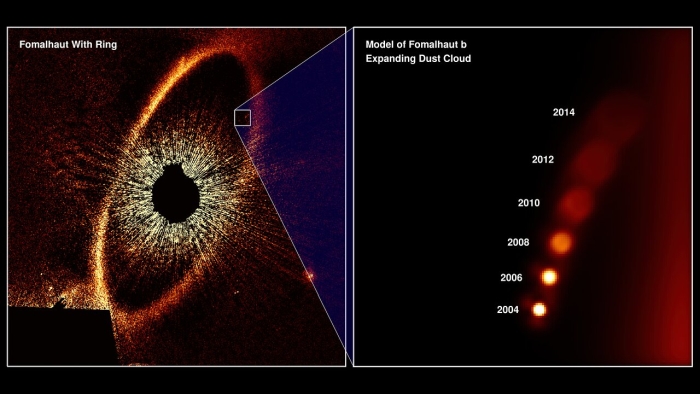 (NASA, ESA, and A. Gáspár and G. Rieke/University of Arizona))

"Our study, which analysed all available archival Hubble data on Fomalhaut b, including the most recent images taken by Hubble, revealed several characteristics that together paint a picture that the planet-sized object may never have existed in the first place," Gáspár said.

When they discovered Dagon's astonishing absence in the 2014 Hubble data, Gáspár and his colleague, astronomer George Rieke of the University of Arizona, scurried to reexamine the previous observations.

And they found, astonishingly, that the object seems to have been fading over time - which directly contradicts that 2012 study that validated Dagon's exoplanet status by finding no change in the object's brightness between observations.

"Clearly, Fomalhaut b was doing things a bona fide planet should not be doing," Gáspár said.

Based on their analysis of the data, Gáspár and Rieke believe that the collision took place not long before that first Hubble image in 2004. The two objects would have each been around 200 kilometres (125 miles) across, and likely made up of rock and ice, like Solar System comets.

The two objects came together in a colossal smash-up that was briefly visible, but has been expanding and dissipating over time. By now, the particles will be far too small to be picked up by Hubble, so tracking it further won't really be possible.

However, based on the data, the team was able to ascertain that Dagon - or what's left of it - isn't orbiting the star after all. Rather, it's on an escape trajectory away from Fomalhaut.

"A recently created massive dust cloud, experiencing considerable radiative forces from the central star Fomalhaut, would be placed on such a trajectory," Gáspár explained. "Our model is naturally able to explain all independent observable parameters of the system: its expansion rate, its fading and its trajectory."