Last year, a global collaboration of scientists made history by unveiling the very first direct image of a black hole. Now, we have a magnificent follow-up - the closest-ever look at a violent jet spewed forth by a supermassive black hole.

That supermassive black hole sits at the heart of a quasar 5 billion light-years away from Earth, the extremely luminous 3C 279. Quasars are amongst the brightest cosmic objects we know of: galaxies with colossal black holes that emit intense radiation as gas in their accretion disk falls towards the event horizon.

The newly published results actually come from the same observation run that yielded the historic black hole image, conducted by the Event Horizon Telescope (EHT) team in April 2017. 3C 279 was one of the four secondary objects in this run - and now we finally get to see the exciting results.

We already know that when matter falls towards the nothingness of a hungry supermassive black hole, a fraction of this material - surrounding gas and dust - gets accelerated almost to the speed of light. As a result, the black hole produces relativistic jets of the fastest-travelling particles in the known Universe.

It's one of these bursting jets that the EHT team has now resolved in unprecedented detail, tracing it all the way down to the accretion disk of the black hole in 3C 279. It might look somewhat blurry to us, but there's a wealth of information in the data.

For one, the team has uncovered a bit of a surprise: while the jet is supposed to be straight, the data actually reveal what seems to be a bend at its base, along with an elongated structure that is perpendicular to the direction of the jet.

"This morphology can be interpreted as either a broad resolved jet base or a spatially bent jet," the team writes in their paper that sports a whopping 351 authors.

And, because the observations occurred on several days, the researchers could also discern fine changes that could well be the smoking gun of something that's been predicted by simulations, but never directly observed - the rotation of the accretion disk and shredding of material as it falls into the black hole. 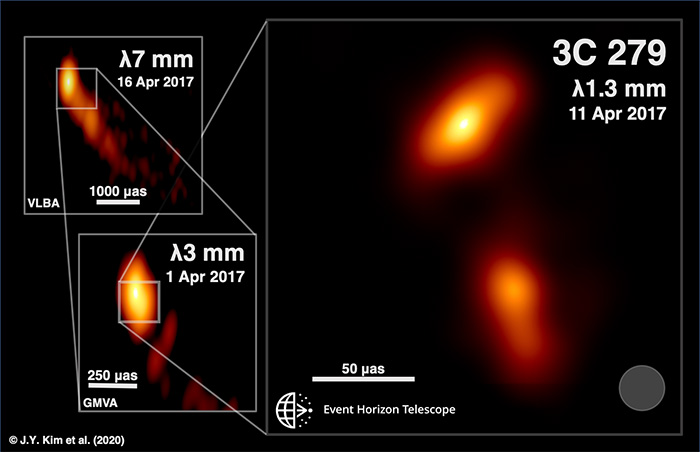 It's no accident that 3C 279 was chosen as one of the objects for EHT to do its magic on. The M87 galaxy, for all the glory of its supermassive black hole we saw last year, is actually a relatively weak source of gamma-ray emission.

More powerful active galactic nuclei - such as 3C 279 - tend to be at much larger luminosity distances, meaning they're harder for us to discern in the night sky. But 3C 279 is one of the brightest sources of gamma rays we've ever observed. Helpfully, it's also a blazar, which means its wonderfully prominent, highly variable jet is directed towards the observer (that's us).

The team trained EHT on 3C 279 on four nights in April 2017, gathering data from eight stations at six geographic sites. Those data had to be carefully transported to supercomputers at the Max Planck Institute for Radio Astronomy (MPIfR) and MIT for extensive analysis.

"For 3C 279, the combination of the transformative resolution of the EHT and new computational tools for interpreting its data have proved revelatory," says astrophysicist Avery Broderick from the Perimeter Institute in Canada.

"What was a single radio 'core' is now resolved into two independent complexes. And they move - even on scales as small as light-months, the jet in 3C 279 is speeding toward us at more than 99.5 percent of light speed!"

These are extraordinary findings for black hole science - having relied on simulations and low-resolution observations for so long, there's still plenty we don't understand about how these enigmatic objects function, and what actually powers the jets that we can see.

"More details of the source properties, such as the magnetic field configuration and detailed jet energy balance, will be subject to follow-up studies," the authors conclude in the paper.

When the world finally met the eye of M87*, astronomers were just getting started with their powerful new toys.

Sadly, the latest EHT observation run slated for March/April this year was cancelled because of the ongoing COVID-19 pandemic. But the collaboration gathered plenty of data in 2017 and 2018, so there's more where this came from.

"Last year we could present the first image of the shadow of a black hole," says Anton Zensus, director of the MPIfR and chair of the EHT collaboration board.

"Now we see unexpected changes in the shape of the jet in 3C 279, and we are not done yet. As we told last year: this is just the beginning."

The results have been published in Astronomy & Astrophysics.