For hundreds of years, geologists have thought the modern-day British mainland was formed by the collision of two ancient land masses, Avalonia and Laurentia.

Now, new research suggests a third continent was involved – Armorica, which today makes up the northwestern region of France.

That's according to some geological detective work that considers, among other clues, the large amounts of tin and tungsten in southwestern England. They match similar deposits over the water in France.

The findings presented by the team from Plymouth University in the UK would indicate that the border between the Avalonia and Armorica land masses, formed many centuries ago, is not under the English channel between England and France.

Instead, it cuts across the English counties of Devon and Cornwall. 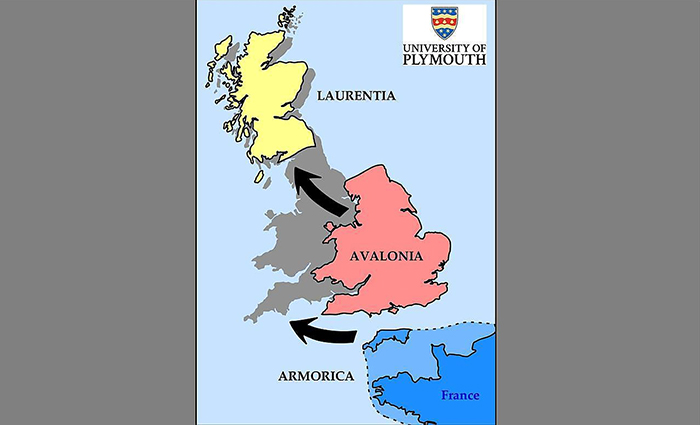 How the British Isles might have formed. (Plymouth University)

"This is a completely new way of thinking about how Britain was formed," says one of the researchers, petrologist Arjan Dijkstra.

"Our findings suggest that although there is no physical line on the surface, there is a clear geological boundary which separates Cornwall and south Devon from the rest of the UK."

Rock records below this boundary match samples from Armorica in France, the researchers say, while rock composition above the boundary is closer to the rest of England.

In total, 22 different sites in Devon and Cornwall were studied, all exposed following geological events such as underground volcanic eruptions many millions of years ago.

Solidified magma samples were subjected to X-ray fluorescence (XRF) spectrometry, a technique where X-rays are directed at a sample, producing secondary X-rays that can then be analysed to work out the composition of a material.

The collected rock pieces were subsequently dissolved in acid to enable a more extensive look at their isotopic make-up, particular the levels of strontium and neodymium – key indicators of geological history.

When compared to samples taken across the rest of Europe and the UK, the boundary between the two rock types became clear.

These ancient collisions would have taken place around 400 million years ago, before the super-continent Pangaea formed and broke apart, and the world's land and ocean boundaries began looking more like they do today.

The formation of the British Isles and subsequently Pangaea would have been determined by the shifting of tectonic plates over millions of years, causing some land masses to crash together and others to tear apart (part of Avalonia can now be found in the north east of the US as well as the UK).

Even across the space of a few thousand years the terrain has shifted considerably, but now we know the geological link between England and the rest of Europe goes back a lot, lot further than that – even as the political ties are about to be severed.

"We always knew that around 10,000 years ago you would have been able to walk from England to France," says Dijkstra. "But our findings show that millions of years before that, the bonds between the two countries would have been even stronger."

"It explains the immense mineral wealth of south west England, which had previously been something of a mystery, and provides a fascinating new insight into the geological history of the UK."