Despite slim hopes that global shutdowns during the pandemic might bring respite from the climate crisis, yet more evidence confirms that no such silver lining exists.

Newly released measurements of atmospheric carbon dioxide (CO2) levels in fact show that concentrations of the heat-trapping chemical have surged to record levels not seen by scientists in the era of modern readings.

The month of May saw the highest levels of CO2 so far in 2021, with the concentration averaging 419.13 parts per million (ppm), researchers at the National Oceanic and Atmospheric Administration (NOAA) announced on Monday.

"If we want to avoid catastrophic climate change, the highest priority must be to reduce CO2 pollution to zero at the earliest possible date." 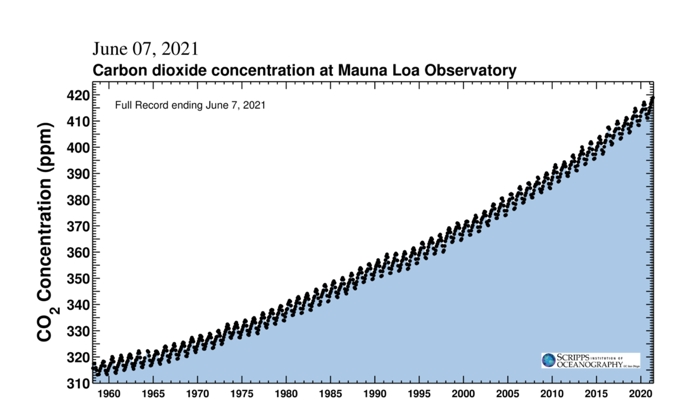 Above: The Keeling Curve, measurements of CO2 concentrations from 1958 to present.

The new 419.13 ppm peak, the scientists say, is the highest monthly average since accurate atmospheric measurements began over 60 years ago.

But the true scale of this result can't be measured in decades, since you'd have to go much, much further back in time to ever find Earth's atmosphere as overloaded with CO2 as it is now.

How far back? Well, roughly to around the time of the Pliocene, specifically about 4.1 to 4.5 million years ago, the NOAA says, which was the last time the atmospheric burden of carbon dioxide was comparable to today's polluted skies.

We know this because researchers have reconstructed past atmospheric concentrations of CO2 using complex proxy methods, such as carbon isotope compositions found in marine sediments from various ocean spots around the world.

The high levels of accumulated atmospheric CO2 during the late Pliocene meant the world was a very different place back then, about 2 to 3 degrees Celsius warmer compared to the pre-industrial period baseline.

In fact, Earth's polar regions were so warm they were grown over with forests, and the ice that would later form in Antarctica and the Arctic was still liquid water – swelling the oceans to a sea level over 20 meters higher than it is today.

We may be only hundreds of years away from a return to those conditions, scientists fear, once the now-comparable levels of CO2 have enough time to warm up the planet again.

Even before we get there, projected sea-level rise by the end of this century alone could threaten to displace hundreds of millions of people – and for many who find safety on dry land, the deadly heat will be unbearable.

It would be nice then if the NOAA was somehow wrong, in which case we wouldn't have to worry so much about their 419.13 ppm reading for May, and what it foreshadows. But other scientists are seeing the same thing.

Separate measurements conducted by the Scripps Institution of Oceanography largely confirm the NOAA's own numbers, albeit with a very marginal difference – with the Scripps team calculating a 418.92 ppm average for May (up from 417 ppm a year earlier).

On at least a couple of days in 2021, in fact, Scripps researchers observed daily levels exceeding 420 ppm, notching up another disastrous first in human history.

In any case, the new results belong in a familiar and firmly established context. They are merely the latest evidence of an unaltered trajectory of CO2 levels, a story we find ourselves telling year after year, again and again.

It's despairing. But it needn't be.

"The solution is right before our eyes," Tans says.

"Solar energy and wind are already cheaper than fossil fuels and they work at the scales that are required. If we take real action soon, we might still be able to avoid catastrophic climate change."

What is clear is that despite the pandemic's shutdowns – and the temporary drops in pollution they provided – that kind of lowering of emissions isn't enough for us to yet see a significant effect on overall atmospheric CO2 concentrations, especially against the backdrop of natural carbon emission fluctuations.

Perhaps a 30 percent drop in human emissions, lasting for six months at least, might show an observable effect, scientists think. But we didn't get that from the pandemic, during which emissions fell around 6 percent.

And every other sign says we're racing in the wrong direction anyhow.

"The last decade has seen the most rapid [CO2] growth of any decade in human history," Scripps geochemist Ralph Keeling told The New York Times.

"So it's not just that the levels are high, it's that they're still rising fast."