Earth's concentration of atmospheric carbon dioxide (CO2) has hit a threshold not seen in at least 3 million years, after a record annual increase in 2016.

In 2015, globally averaged concentrations of CO2 in the atmosphere stood at 400 parts per million (ppm), but this surged to 403.3 ppm last year, due to human-caused emissions in parallel with a strong El Niño event in 2015/2016.

"We are still emitting far too much and this needs to be reversed. The last few years have seen enormous uptake of renewable energy, but we must now redouble our efforts to ensure these new low-carbon technologies are able to thrive." 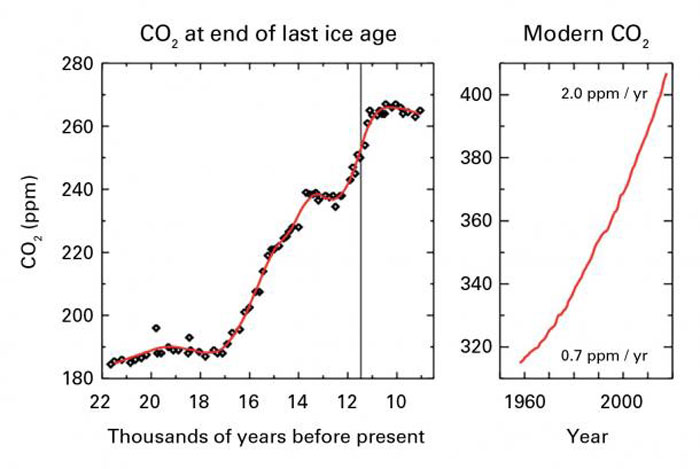 The observations, collected by the World Meteorological Organisation's (WMO) Global Atmosphere Watch program, mean atmospheric CO2 is now at 145 percent of its pre-industrial level (before 1750), while methane and nitrous oxide are sitting at 257 percent and 122 percent respectively.

Before now, the greatest recorded annual surge in CO2 occurred between 2012 and 2013, but the 3.3 ppm increase in 2016 eclipses both that and the average growth rate over the last decade.

It's unknown just how much of this record-breaking upswing is due to El Niño, which triggers droughts that reduce the ability of natural carbon sinks like forests to absorb CO2 – but it's clear that the rest of this unprecedented surge falls squarely on humanity's shoulders.

"This should set alarm bells ringing in the corridors of power," says carbon researcher Dave Reay from the University of Edinburgh in the UK, who wasn't involved with the report.

"We know that, as climate change intensifies, the ability of the land and oceans to mop up our carbon emissions will weaken. There's still time to steer these emissions down and so keep some control, but if we wait too long humankind will become a passenger on a one-way street to dangerous climate change."

The good news – and yes, there is some to be found in all this – is that we're already taking important steps to turn this desperate situation around.

Everywhere we turn, we can see hard evidence of people acting in direct response to the dirty, old systems that empowered climate change to get to this dramatic peak.

In China, authorities are shutting down an estimated 40 percent of factories to reduce pollution, while the Netherlands is putting steps in place to kill all coal use by the end of the next decade.

Oxford in the UK is aiming to become the world's first carbon emission-free city by 2035, while Australia is busy prepping what will soon be the world's biggest solar thermal power plant.

Despite the ambivalent absence of a United States that refuses to let coal go, a vast majority of the world's nations are banding together to tackle climate change in the UN's Paris agreement, and there's every reason to feel good about what that historic union could still achieve.

So sure, it can be scary sometimes when we see the doom and gloom in the headlines, but past environmental victories have already shown that when we come together, we really can create meaningful solutions to environmental problems, especially given we've got enough clean natural resources in terms of wind and solar energy to power almost everything we need.

So let's not give in to despair on this one, alright guys? Now is the time to have hope, roll up our sleeves, and work harder than ever to turn this alarming CO2 trend upside-down.

The findings are reported in the WMO's Greenhouse Gas Bulletin.