A colour blind view on the left and a colour corrected on the right. (Sharon Karepov/Tel Aviv University)

We may not be as lucky as birds, but the human eye does pretty well when it comes to colour perception; typically, we can distinguish around 1 million colours. A new type of contact lens could now restore some of that range in people with colour blindness, whose colour perception is limited in some parts of the spectrum.

Fixes for some types of colour blindness are already commercially available, in the form of clever frequency-filtering sunglasses. Now, engineers Sharon Karepov and Tal Ellenbogen from Tel Aviv University in Israel have come up with a way to transfer colour-correcting films onto the surface of contact lenses.

Not only does this innovation add exciting new options to the market of colour blindness therapy, the process can be custom-tailored to suit a range of visual impairments.

What we commonly refer to as colour blindness actually refers to a variety of conditions that affect how our eyes and visual system identify different wavelengths of light; the vast majority of colour blind people do see colours, just not all of them.

At the back of a typical eyeball, a screen of three types of light-sensitive cone cells absorbs light waves and responds with a message to the brain.

Some of these cells respond most excitedly to relatively short wavelengths (so they're labelled S for 'short'), while two respond to longer ones: one most sensitive to light that's around the green-to-yellow part of the spectrum (M), and another yellow-to-red (L). 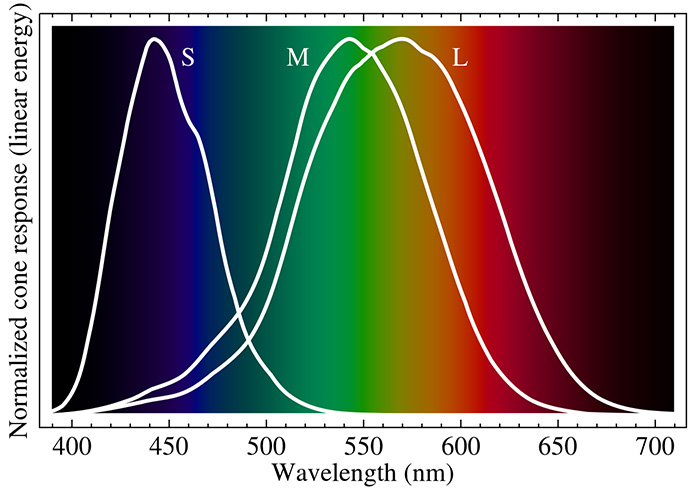 When things go wrong with one or more of these cone cell types, it can result in various types of colour vision deficiency. Most commonly, people have trouble telling apart colours in the red and green wavelengths - which means the problems arise from the M or the L cones.

For example, in the most common type of colour blindness - deuteranomaly - signals from the 'green-yellow sensitive' (M) cells are dulled. As a result, the brain is overwhelmed with responses from the 'yellow-red sensitive' (L) cells. (You can play around with this colour blindness simulator to see what people with different types of deficiency may be experiencing.)

"Problems with distinguishing red from green interrupt simple daily routines such as deciding whether a banana is ripe," says Karepov, explaining the ingenious tech behind the new colour-correcting contacts.

The idea itself has old roots. More than a century ago, James Clerk Maxwell – the 19th century Scotsman famed for developing equations for describing the electromagnetic waves we call light – suggested filtering some colours could help the less vibrant ones shine through.

Several years ago materials scientist Don McPherson accidentally worked out that the right mix of rare earth metals embedded in a transparent material could scatter waves in a way that achieves the right level of light filtering.

The result, after a lot of tinkering, was a successful company called EnChroma, which produces glasses for people with 'red-green' colourblindness, which includes conditions such as deuteranomaly.

If you have a few hundred dollars to spare, the glasses seem to do the trick quite nicely - but not everybody is a fan of wearing glasses.

"Glasses based on this correction concept are commercially available, however, they are significantly bulkier than contact lenses," says Karepov.

The filtering technology Karepov and Ellenbogen rely on for their fix has more to do with the strange optical properties of metasurfaces – tiny surface variations intended to alter the way light reflects or passes into a material.

"Our contact lenses use metasurfaces based on nano-metric size gold ellipses to create a customised, compact and durable way to address these deficiencies," says Karepov.

Using a metasurface instead of a filtering agent makes it far easier to tweak the material's properties to suit individual needs. But a big problem is current techniques for producing them can only etch them into flat surfaces.

Rather than reinvent the wheel, the engineers settled on making metasurfaces the traditional way, instead coming up with a method for transferring the 40 nanometre thin film to a curved lens.

The resulting lens is yet to prove its worth in clinical testing. Lab simulations using the Ishihara test suggest colour distinctions could be 10 times better with their lenses, so they're off to a promising start.

To get some idea of how well they could work, the image above shows the same tree through most eyes, then through the eyes of somebody with deuteranomaly, followed by an image corrected by a metasurface-etched lens.

Beyond scratching light-filtering properties into contacts, the engineers see their transfer process being used to transform a whole range of curved materials.

"This new fabrication process opens the door for embedding metasurfaces into other non-flat substrates as well," says Karepov.

It's good to know in the near future we'll all be able to appreciate nature's full rainbow in comfort, whatever your style.

This research was published in Optics Letters.