Cloud formation depends on a number of factors, including atmospheric temperature and the amount of water vapour in the air, but we might be able to add another influence to the mix: cosmic rays beaming down through space.

New research suggests these rays are capable of seeding clouds with their radiation bursts, affecting weather conditions and even climate change in the long term.

Scientists from the Technical University of Denmark (the Danmarks Tekniske Universitet or DTU) suggest that their experiments show varying radiation from the Sun and other supernovae could lead to variations on our weather - but not everyone is convinced. 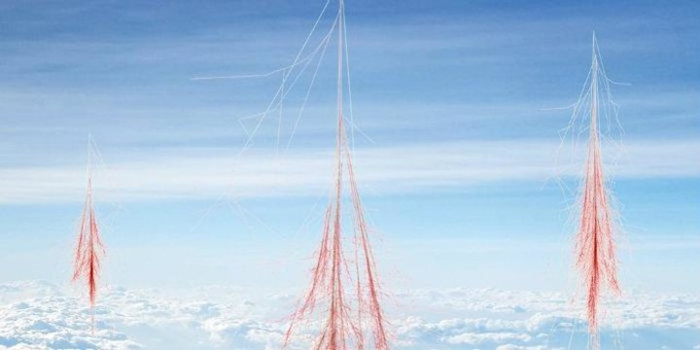 "Finally we have the last piece of the puzzle explaining how particles from space affect climate on Earth," says lead researcher Henrik Svensmark.

"It gives an understanding of how changes caused by Solar activity or by supernova activity can change climate."

The clouds in our skies develop from cloud condensation nuclei: that is, water vapour condensing on what are called aerosols - such as small bits of dust, ice, and salt in the atmosphere. This happens when the amount of water vapour and temperature conditions are just right.

Then we have the cosmic rays, high energy radiation made from protons and the nuclei of elements including hydrogen and helium. These rays barrel through our entire Universe, ejected by the Sun and other stellar objects.

We know that when cosmic rays hit Earth's atmosphere, they produce a shower of electrically charged "secondary" particles or ions.

What Svensmark and his colleagues are proposing is that these ions add extra material to the aerosols, ultimately forming bigger clouds, and impacting cloud cover and the temperature at ground level.

To test this, they rigged up a test chamber that was 8 cubic meters (about 283 cubic feet) in size. They were able to get more small clouds to form from aerosols when passing electrically charged particles through the chamber.

Based on their experiments and modelling, the team estimates that between 5-50 percent of aerosol growth rate could be down to ions – that's based on two years of testing in the chamber with over 3,100 hours' worth of data samples in total.

Big shifts in cosmic ray activity, like exploding supernovae, could even cause enough of a difference to shift the temperature on our planet, the team suggests.

However, the researchers themselves do admit that parts of their hypothesis are "speculative" – there are a lot of factors at play in cloud formation, and it's impossible for a cloud chamber in a lab to properly model the Earth's atmosphere.

While the findings suggest that cosmic rays could play at least some part in cloud formation, claims about effects on climate change must be weighed up against the evidence we have for the effect of greenhouse gases and other factors down here on the planet.

"Of itself, this is an interesting and plausible result, and if it stands up to more detailed scrutiny it may prove an important contribution to aerosol microphysics," says atmospheric scientist Hamish Gordon, from the University of Leeds in the UK.

"However, it is very far from 'the last piece of the puzzle explaining how particles from space affect climate on Earth'."

Recent research carried out at CERN by Gordon and others suggests that particles released by human beings and trees are likely to be much more influential in terms of affecting cloud cover than showers of particles from space.

"In the climate of the last few thousand years, [cosmic rays] can make no appreciable difference to overall cloud-seeding particle concentrations in the atmosphere or to temperature," Gordon told Ryan F. Mandelbaum at Gizmodo.

Whatever's happening above our heads – and we're still only part of the way through understanding it all – the idea that cosmic ray activity can add to the build up of clouds is going to be worth investigating in the future.

"The theory of ion-induced condensation should be incorporated into global aerosol models, to fully test the atmospheric implications," conclude the researchers.