Ariane 5, the rocket that will launch the mission. (ESA/CNES/Arianespace/Optique Video du CSG)

The European Space Agency (ESA) will launch its BepiColombo mission to the planet Mercury from its spaceport near the equator in Kourou, French Guyana, on October 20.

My involvement in the mission means that I will be anxiously following the journey as the spacecraft carries out a series of tricky manoeuvres, culminating in its final approach to Mercury in 2025.

The mission comes 25 years after a group of scientists first proposed to ESA that it should send a probe to Mercury, and 18 years after ESA approved the project as a "cornerstone" mission.

It is a puzzling planet. NASA's MESSENGER orbiter (2011-2015) revealed many reasons why scientists are keen to learn more about it.

These include the planet's abnormally large core – we don't know why it is still molten and able to generate a magnetic field, unlike that of Mars or Venus.

Another mystery is the abundance of (largely unidentified) volatile substances at its surface. These ought not to have been incorporated in a planet that formed so close to the sun as Mercury now is.

BepiColombo's initial course after three days of orbiting the Earth for checkouts will be an elliptical orbit about the Sun. This will begin by taking it inside the Earth's orbit.

But early in 2019, it will cross outside it for most of the year. It will then move back inside before coming very close to the Earth in April 2020. 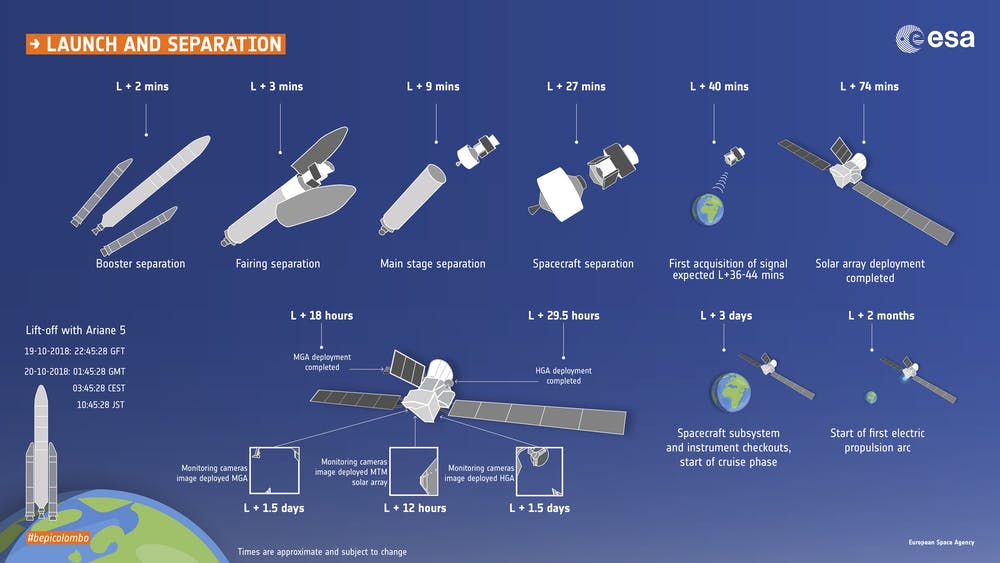 At that time it will make a "gravity-assist" flyby – using the Earth's gravity to swing itself inwards towards Venus. There will also be a gravity-assist flyby of Venus when it gets there in 2020, followed by yet another in 2021 to send it towards Mercury.

Then, there will be a series of six similar flybys of Mercury in 2021-2025, needed to ensure that the spacecraft eventually closes in on its target at a slow enough speed to be captured into orbit around it in December 2025.

Each flyby, shown in the animation above, has to be executed perfectly. Things could go wrong, especially during the launch, but I have ample confidence in the abilities of ESA's flight control team at Darmstadt, Germany.

The mission, which is named in memory of Giuseppe (Bepi) Colombo who first proposed gravity-assist flybys for spacecraft, is a joint venture between ESA and its Japanese counterpart, JAXA.

The stacked spacecraft carries two orbiters. ESA's is a two-metre long unit, massing more than a tonne, referred to as the Mercury Planetary Orbiter, MPO.

I suspect that after it begins to orbit Mercury, it will inherit the name of BepiColombo or maybe just Bepi. The Japanese orbiter is smaller, and its mass is about a quarter of ESA's orbiter.

Originally called the Mercury Magnetospheric Orbiter, MMO, in June it was awarded the name Mio, which in Japanese carries connotations of safe navigation. During the cruise to Mercury, Mio will be housed inside a sunshield and attached to one side of the European orbiter. 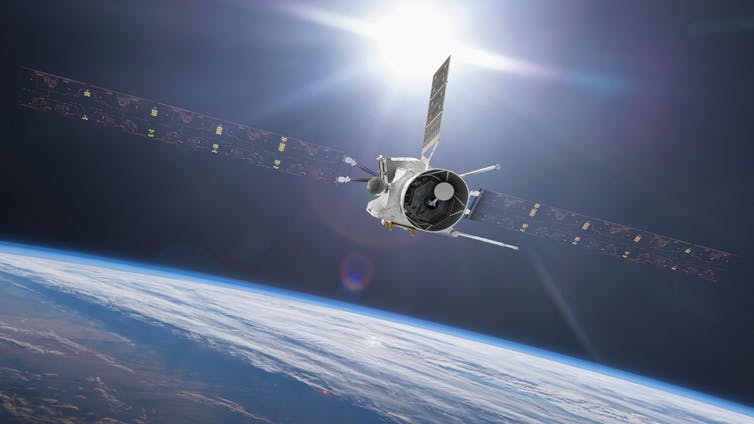 On the other side of the orbiter is the Mercury Transfer Module, MTM. This is operated by ESA, and provides the propulsion to take the stacked spacecraft all the way to its Mercury orbit.

It has a 7.5-metre long "wing" of solar panels, whose job is to turn sunlight into electricity to power its "ion drive".

This is a propulsion device that creates thrust by accelerating xenon gas that has been positively charged (by stripping its atoms of electrons). This technique can provide much more thrust per mass of fuel than conventional chemical rockets.

The sun's enormous gravity means that more energy is needed to get into a stable orbit about Mercury than would be needed to send the same spacecraft to vastly more distant Pluto.

Because of this, the ion drive will be operated at intervals amounting to about half the cruise duration, mostly to slow the spacecraft down.

Unfortunately, the stacked configuration of the combined spacecraft impedes its ability to do science during the planetary flybys. Some scientific data will be collected, but the best pictures we are likely to get during flybys will be from the selfie-cams mounted on the MTM.

On arrival at Mercury in late December 2025, the transfer module will be detached. Mio, spinning at 15 revolutions per minute for stability, will then be liberated into a strongly elliptical orbit about Mercury.

As soon as this happens, JAXA will take over Mio operations and guide it through its tasks studying the planet's magnetic field and the associated space environment.

ESA's orbiter will then jettison the sunshield, its last impediment, and use its own chemical thrusters to achieve a closer, more circular, orbit about Mercury.

From there it will study the planet's surface by using an assortment of cameras and other instruments. This should pin down the composition and geological history in much better detail than the smaller and less complex MESSENGER.

The orbiter will also carry a magnetometer so that both it and Mio will be able to report magnetic conditions at two places simultaneously – an important first for a deep space mission that should teach us about the speed at which disturbances travel through the planet's magnetic field.

It's exciting to think that BebiColombo may transform our knowledge of Mercury in just a few years. And while you wait, from October 23, you will be able to listen to some beautiful, evocative music that the planet has inspired as part of the Planets 2018 project.

This was set up to commemorate the centenary of Gustav Holst's Planets Suite with music inspired by the science of the planets.