This Experimental Patch Can Painlessly Check Your Blood Glucose Levels

Scientists in Japan have developed a paper-based sensor equipped with an array of extremely tiny microneedles, which they say can painlessly penetrate human skin for a quick and easy method of conducting diagnostic tests for conditions like pre-diabetes.

Microneedles are super tiny-spikes so small they're measured in micrometres (one thousandth of a millimetre), designed to puncture only the outermost layer of the skin, not reaching sensory nerves that lie deeper in the dermis.

Because of this shallow penetration and their easy application via patches, microneedles show revolutionary promise for certain aspects of drug delivery, including things like flu shots and insulin, and they've even played a small role in vaccine development for coronavirus.

The unique dimensions of microneedles go far beyond conventional drugs, though. 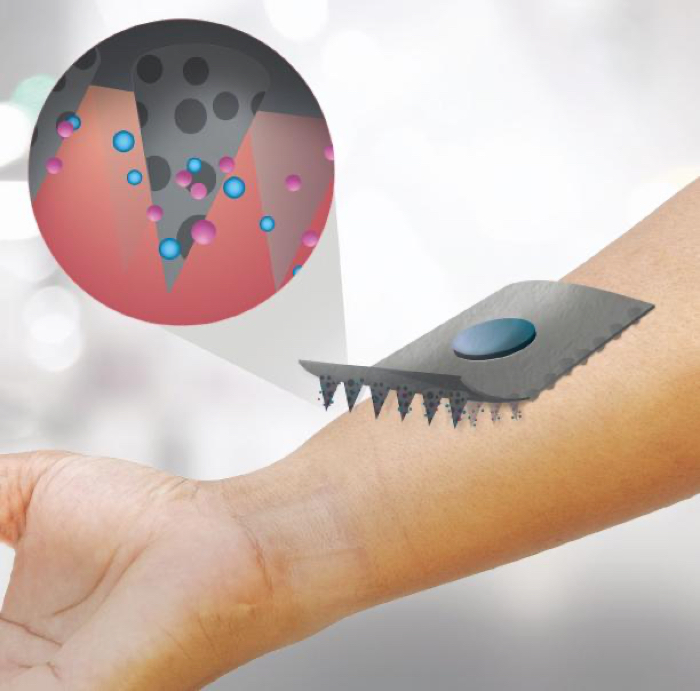 These tiny spikes are so small, they could help us to inject things in cases where conventional needles would be impractical or impossible: like delivering drugs to plants or straight into the eye. We might even be able to use them to dissolve excess body fat, which could amount to the most painless artificial way of losing weight yet.

While the possibilities for injections are exciting, another field of research is exploring the diagnostic potential of microneedles to detect diseases that may already be present, which is the focus of the new Japanese research.

In a recent study led by senior researcher and microneedles engineer Beomjoon Kim from the University of Tokyo, the team investigated how to make a microneedles array that could quickly and easily analyse interstitial fluid (ISF) in the epidermis, with a view to lessening our reliance on conventional hypodermic needles, which are much more invasive and painful, and require training to use.

"We have overcome this problem by developing a way to combine porous microneedles with paper-based sensors," says Kim.

"The result is low-cost, disposable, and does not require any additional instruments."

To make their microneedle sensor, the team poured a melted mixture of a biodegradable polymer and salt into cone-shaped cavities, much like pouring batter into a cupcake tray.

Once solidified, the microneedles were treated with a solution that left them porous, by removing their salt content, and then affixed to a small patch of paper attached to a glucose sensor – something the team claims has never been done before, expediting the otherwise manual process of extracting ISF samples from the needles.

The idea is that when the tiny, porous spikes are injected into the epidermis, their open pores soak up liquid in interstitial fluid, which contains lots of biomarkers. In the team's experimental setup, the envisaged biomarker is glucose, which would theoretically flow from the porous microneedles onto the paper and then the glucose sensor.

So far, the device has only been tested in the lab on gel made from agarose, but in testing the microneedles worked as expected, with the sensor detecting glucose levels in the gel sample.

"The results show a clear colour change due to the difference in glucose concentration," the authors explain in their paper.

"The fabricated device can identify diabetics, making it suitable for POC diagnosis… we expect it could offer [a] useful platform for [a] minimally invasive diagnostic device."

The scientists now intend to test their proof-of-concept further, conducting experiments with human participants, to confirm it works as they expect in real-world diagnostic conditions.

If it does, we could be looking at much more than just glucose monitoring in the future, they suggest – and all without spilling a single drop of blood.

"Of course, prediabetes testing is just one application of the technology," says first author and PhD candidate Hakjae Lee.

"The paper-based sensor can vary depending on the biomarker you wish to monitor."

The findings have been reported in Medical Devices & Sensors.