Peas, Quinoa And 7 Other Crops Grown Successfully in Soil Equivalent to Moon And Mars

If we're going to support ourselves on off-world bases then we're going to need to find a way to grow our own food, and now we've got more than a Matt Damon film to suggest it's possible – experiments run using lookalikes of Moon and Mars soil have successfully produced crops.

Interestingly, the Mars-equivalent soil was better than the Moon soil simulant when it came to growing the plants - providing hope for future agriculture on the Red Planet. Although fans of spinach may miss out.

Researchers used a NASA-developed reproduction of regolith, the loose mix of dirt, dust and other debris found on top of the hard surface of Mars and the Moon. This regolith simulant was mixed with organic material that astronauts would need to bring to an off-world base from Earth, or could be leftover compost from earlier harvests.

In tests on 10 different crops – garden cress, rocket, tomato, radish, rye, quinoa, spinach, chives, pea and leek – the crops all grew well and produced edible parts, with the exception of the spinach. 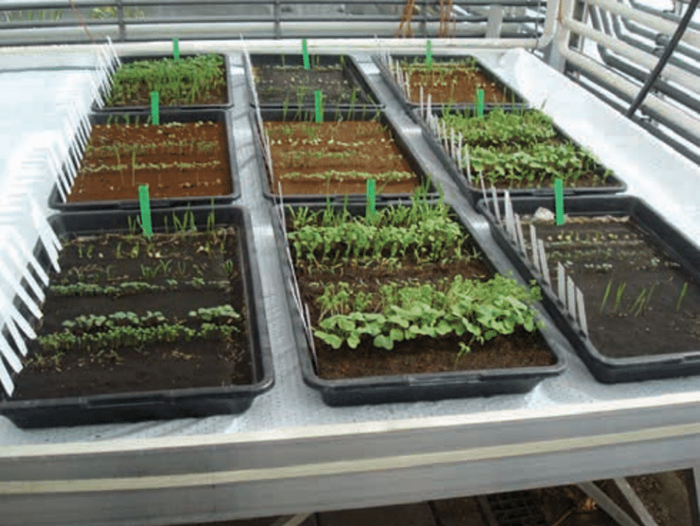 "We were thrilled when we saw the first tomatoes ever grown on Mars soil simulant turning red," says ecologist Wieger Wamelink, from Wageningen University & Research in the Netherlands.

"It meant that the next step towards a sustainable closed agricultural ecosystem had been taken."

This experiment has been running for several years now, but now a peer-reviewed paper has been published in the journal Open Agriculture on the results.

The crops did better in the Martian regolith than the Moon regolith, the researchers report – the Martian mix is based on observations taken from the Viking landers and the Pathfinder rover, and largely uses material from a volcanic area of Hawaii.

As for Moon regolith, we actually have samples of it – just not enough to grow crops in. The NASA-approved simulant is based on material collected from the deserts around Flagstaff, Arizona, in the US.

On top of the successful growing of nine of the crop species, the scientists were able to harvest enough seeds from the radish, garden cress, and rye plants to start a second crop.

There's still plenty of work to do before we can open our farms on Mars and the Moon – this study only looked at the type of soil available on the Moon and on Mars, without taking into consideration the other harsh factors plants would be up against, such as solar radiation and extreme heat and cold (it's likely that we'd have to grow our crops indoors).

Nevertheless, this is a positive step forward. Progress is always going to be slow when it comes to growing plants on other planets, but there are positive signs we are getting there.

This latest paper follows previous research where 14 different plant species were grown in soil simulant. In that case, too, the Mars simulant proved more conducive to growth than the Moon simulant.

Other possibilities for growing food away from Earth include hydroponics - where only water is needed for cultivation - and aeroponics, growing crops literally in mid-air, and spraying them with nutrients. Both present challenges of their own, so it's important to keep our options open.

The researchers describe their work as "a small step towards the final goal, a sustainable agricultural ecosystem for a Moon and Mars colony".

"More research is necessary to find the optimal organic matter content of the simulant regoliths and the water use efficiency," they conclude in their published paper.

The research has been published in Open Agriculture.