Nearly 12,600 years ago, during the Late Pleistocene era, a group of humans hunted and killed a giant ground sloth in Argentina, then left the animal's bones behind, along with their butchering knife.

The giant sloth's bones remained there, at a site called Campo Laborde in the Pampas region, until 2000, when a local farmer discovered them. Scientists recently re-analysed these fossils in the hopes of better pinpointing when, precisely, this killing took place.

The sloth that these ancient humans ate, whose scientific name is Megatherium americanum, was 10 feet (3 metres) tall and weighed more than 4 tons. It stood on two feet and was covered in shaggy hair.

Although archaeologists know that humans once preyed on megamammals across the Americas, the Campo Laborde finding is the "only confirmed ground sloth kill" ever, according to the new study.

The findings also revealed that, contrary to what scientists previously thought, giant ground sloths went extinct during the end of the Late Pleistocene, some 12,000 years ago. At that time, up to 90 percent of all large-bodied animals across the world – including mastadons, prehistoric horses, and ancient giant armadillos – went extinct on every continent except Africa.

Researchers previously thought giant ground sloths were able to survive this wave of extinction, but the new discovery bucks that idea.

Instead, it seems Homo sapiens may have been one of the main reasons these large animals died out.

After the sloth bones were found in 2000, archaeologists examined the fossils and determined that they were between 9,700 and 6,750 years old, based on carbon dating.

"In that case, we suspected that maybe these early hunters didn't have an impact on the sloth's extinction," Gustavo Politis, an archaeologist from the Universidad Nacional del Centro in Buenos Aires and the lead author of the new study, told Business Insider.

But then in 2016 and 2017, Politis and his team re-dated the bones using a more sophisticated purification technology called XAD-2 resin, which separates the organic part of bones (collagen) from the inorganic elements (fulvic acids), then dates each component separately.

The results led the scientists to revise their timeline: The bones were at least 1,000 years older than they had originally thought, putting this killing site firmly in the Pleistocene era.

Politis said the implications of the date change are huge. It means that the time span between the arrival of humans and the extinction of the megamammals in this region of South America was only 2,000 years. In other words, our ancestors managed to push these giant ground sloths to extinction in just two millennia.

The new results have also made Politis suspect that other giant sloth fossil sites have been dated incorrectly. 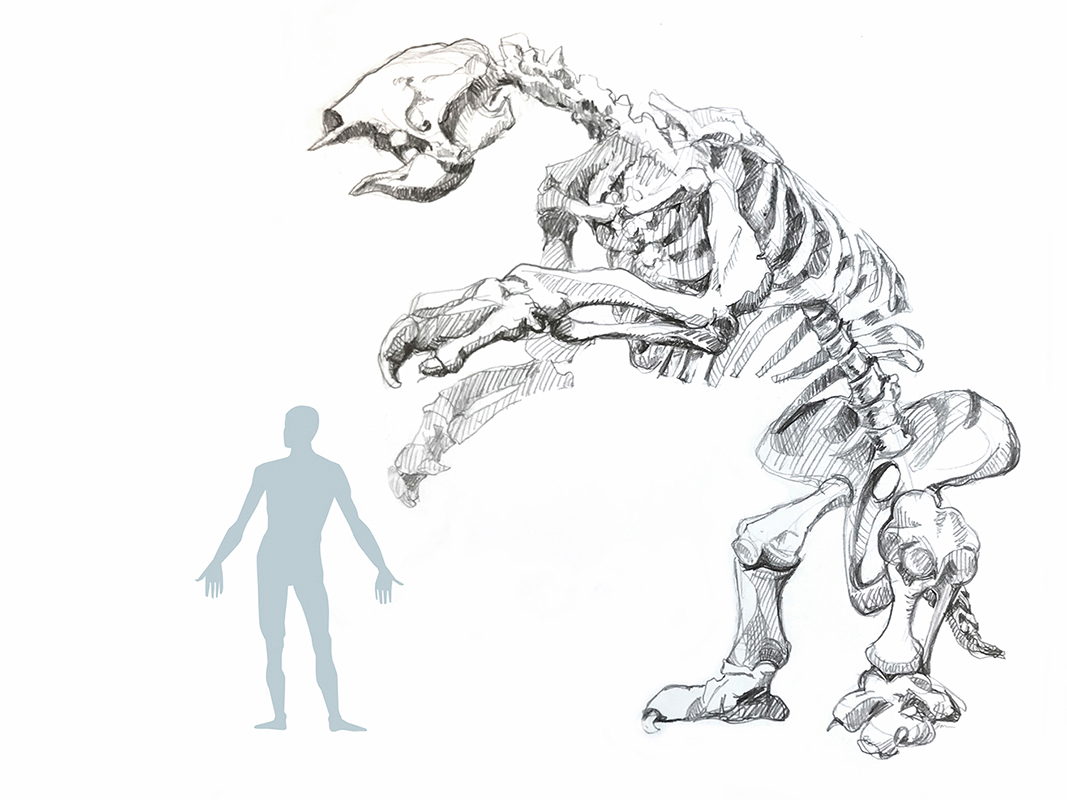 The giant sloth could reach over 4 metres (13 feet) high. ( (Julie McMahon/University of Illinois at Urbana-Champaign)

Homo sapiens were the new predators on the scene

Although giant sloth fossils are plentiful across South America, Campo Laborde is "the only place in the entire Americas where we can see the animal was hunted and killed there," Politis said.

The archaeologists found evidence, including a broken piece of knife and other stone tools, that humans clearly hunted and butchered the animal. According to Politis, the team could even tell that the knife these hunters used to cut the meat had been sharpened, broken, and thrown away.

"They removed the most valuable meat, then abandoned the carcass and left," Politis said.

The tools that his team found around the dead ground sloth were between 11,800 and 10,000 years old, further confirming the site's earlier date.

After humans arrived in South America 14,500 years ago, they made quick work of many megamammals that lived on the continent.Homo sapiens also hunted mastadons and giant armadillo relatives called glyptodons.

If this new butchering date is correct, it's likely that ancient humans contributed to those animals' rapid extinction, as well as that of the giant sloth, Politis said.

"This is a window into the past," he said. "We can reconstruct, in some ways, the actions that people performed 12,600 years ago."