From our vantage point here on the surface, it might not seem like it sometimes, but we live on a breathtakingly gorgeous world. And it's incredibly special. Of all the over 4,000 exoplanets scientists have found out there in the wider galaxy so far, none is exactly like Earth.

Unfortunately, most of us are stuck here. But, fortunately, human space exploration is growing, allowing us to zoom out and enjoy the sight of our beautiful blue planet, sparkling in the darkness of space.

Astronauts, when they look back down on Earth, report intense emotions and a shift in perception on seeing that sight, in person, with their own eyes. They feel suffused with wonder, a deep understanding that we humans are all inhabiting this world together, with all our struggles and striving. That we are all connected.

This is called the Overview Effect, and while looking at pictures and videos taken from space cannot capture it entirely, there's something wonderfully soothing and serene about gazing at our planet from a perspective we don't usually enjoy.

The video above is a collection of night scenes filmed by a camera mounted onto the International Space Station (ISS) as it flies over our planet at night.

From its orbital altitude of about 408 kilometres (254 miles), you can see the glittering lights of human cities, lightning flashing in clouds storming over the sea. Arcing over the horizon like a fragile shell is a green glow. That's a phenomenon called airglow, created by atoms and molecules in the upper atmosphere that have been excited by the Sun shedding that excess energy in the form of light.

It's similar to, but not the same as aurora (seen in the second half of the video), produced when solar wind interacts with charged particles in Earth's magnetosphere, which rain down into the ionosphere, colliding with gases and transferring energy. This, too, is emitted as light.

Here on Earth, we see lots of celestial bodies rise. Sunrise, every morning. Moonrise. Even, if you know where to look, planetary rises - Venusrise, and Marsrise. If you were on the Moon, you'd see something that never appears in our skies - Earthrise.

The video above lets us enjoy this phenomenon from a JAXA satellite called Selene orbiting the Moon on 7 November 2007. As it orbits at a lunar altitude of about 100 kilometres (60 miles), it collects detailed geological and altitude data on the Moon so that we can gain a better understanding of our grey satellite.

But it's also equipped with a high-definition camera, so that we on Earth can have a Selene's-eye view of our home.

There's something quite surreal about the above video. It's a series of stills captured by a camera on-board NASA's Deep Space Climate Observatory (DSCOVR) satellite on 16 July 2015, from 1.6 million kilometres (1 million miles) away.

Not only is it a gorgeous, crystal clear image of our planet in full sunlight, it shows a side of our Moon we never see from Earth. Since the Moon is tidally locked to Earth, it always faces the same side towards us.

The far side - not the dark side, as you can see - looks very different. It's lacking the dark, basalt volcanic plains we see on the near side, and is far more pocked and cratered. This is possibly because the crust on the near side is much thinner, which has allowed volcanic activity to break through, spilling out over the craters.

It's still a little unclear why the two sides are so different - it could be because of the influence of Earth's gravity - but scientists are trying to find out. 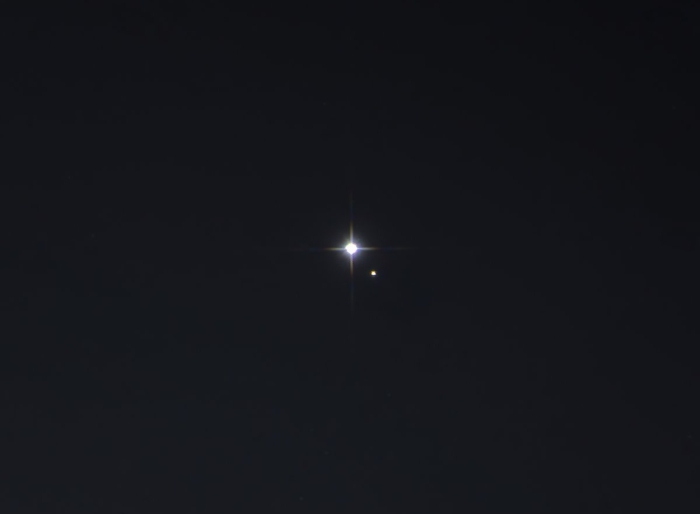 Don't we look so delicate and fragile? Yep - that's no star. That's Earth, and the Moon. That's what we looked like on 19 July 2013 to the Cassini spacecraft 1.5 billion kilometres (900 million miles) away, from its position in orbit around Saturn.

The more famous colour image shows Earth peeping out below Saturn's vast rings, and Mars and Venus over the other side. It's a wonderful photo that puts in perspective the sheer size and scope and empty space of the Solar System.

But this simpler one is special, too. Because it shows us how dazzlingly our precious home can shine.