For The First Time Ever, Scientists Have Imaged The Brain on LSD

In a world-first, scientists in the UK have imaged the effects of LSD on the human brain, and we now have an unprecedented view into the effects of one of the most powerful drugs ever created.

These images not only reveal that the potent hallucinogen activates regions all over the brain - and not just the visual cortex, as previously suspected - but it shows how regions that are usually separated start signalling to each other in response to the drug, to produce some intense effects.

The experiment was led by David Nutt, a professor of neuropsychopharmacology at Imperial College London, and the UK government's former drugs advisor, who was sacked in 2009 for his criticism of its tougher laws on cannabis.

Together with his colleague, Robin Carhart-Harris, Nutt recruited 20 healthy volunteers who were willing to get super high for science, and injected them with 75 micrograms (mcg) of LSD - or 0.075 mg - on one day, and a placebo on another.

As you can see in the images above and below, the effects of the drug ran all over the brain, and connectivity between regions was altered dramatically. The team used three different brain imaging techniques - arterial spin labelling, resting state MRI, and magnetoencephalography - to figure out what was going on.

They found that the participants' visual processing was no longer restricted to the visual cortex at the base of the brain - all kinds of regions contributed to what the participants 'saw', which is pretty odd, seeing as their eyes were closed.

"We observed brain changes under LSD that suggested our volunteers were 'seeing with their eyes shut' - albeit they were seeing things from their imagination rather than from the outside world," explains Carhart-Harris. "We saw that many more areas of the brain than normal were contributing to visual processing under LSD - even though the volunteers' eyes were closed." 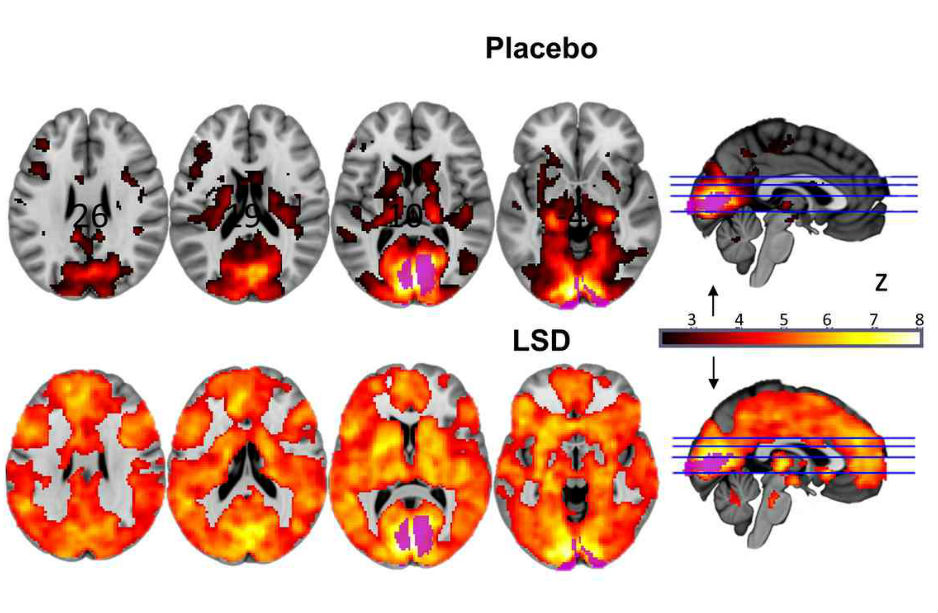 This could explain why LSD is associated with intense, dreamlike images and a sense of 'oneness' with the Universe, but also a loss of personal identity, known as ego dissolution.

"Normally our brain consists of independent networks that perform separate specialised functions, such as vision, movement and hearing - as well as more complex things like attention," says Carhart-Harris. "However, under LSD the separateness of these networks breaks down and instead you see a more integrated or unified brain."

While this might all seem like just a bit of fun with drugs, the researchers behind the experiment are taking it very seriously. Nutt says neuroscientists have waited 50 years for this moment, which was made possible by a crowdfunding campaign.

"This is to neuroscience what the Higgs boson was to particle physics," he told The Guardian. "We didn't know how these profound effects were produced. It was too difficult to do. Scientists were either scared or couldn't be bothered to overcome the enormous hurdles to get this done."

The researchers say it's so important to get a better understanding of the incredibly intense and unique effects of LSD - or Lysergic acid diethyl amide - on the brain, because without it, we'll never realise the potential therapeutic effects of psychedelic drugs for people with psychiatric disorders, such as depression and addiction, or maybe even asthma.

"We are finally unveiling the brain mechanisms underlying the potential of LSD, not only to heal, but also to deepen our understanding of consciousness itself," Amanda Feilding, director of the Beckley Foundation in the UK, which partly funded the study, said in a press statement.

The results have been published in Proceedings of the National Academy of Sciences.