For The First Time, Scientists Have Seen Dolphins Adopt an Orphan From Another Species

Bottlenose dolphins are attentive and flexible parents: the very survival of their calves depend on it. And, in some rare cases, so do their adopted offspring. For the first time ever, scientists have witnessed a mother dolphin caring for the orphan of another species as though it were hers.

For more than three years, researchers in French Polynesia have tracked this unusual bottlenose dolphin (Tursiops truncatus) as she raises a melon-headed whale calf (Peponocephala electra) along with what appears to be her own biological newborn.

The unique case is unprecedented in dolphins as far as we are aware, and it's only the second example of cross-genus adoption ever documented in wild animals. The other case was reported back in 2006, when primatologists spotted two capuchin monkey mothers raising a baby marmoset.

Two parents, however, make such an adoption much more manageable. Bottlenose dolphins give birth to one calf at a time and care for that baby for up to six years. So adopting another calf on top of that is a massive constraint on both the mother and her real biological offspring. 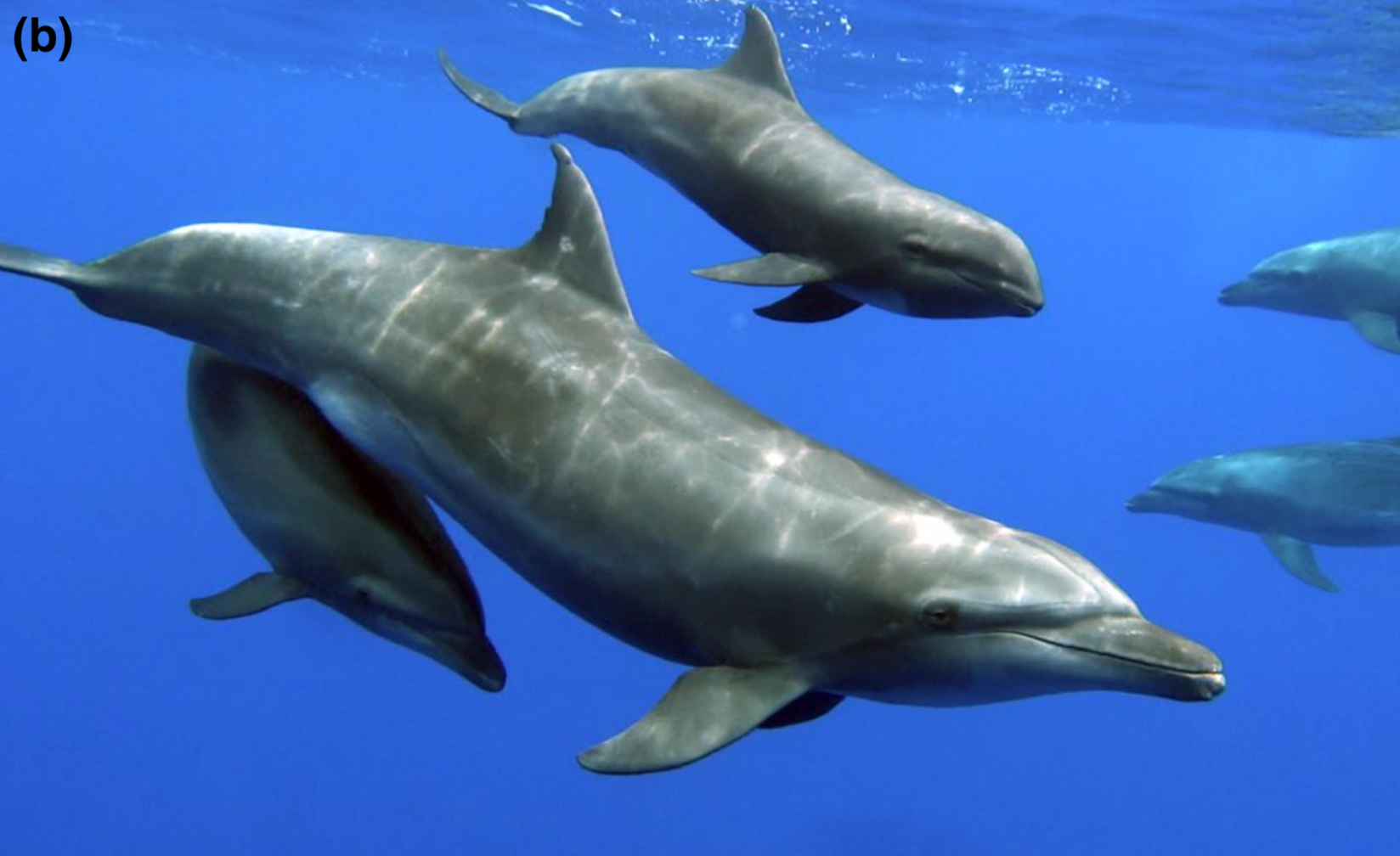 "A female who, in addition to her own calf, takes care of a heterospecific [from a different species] baby, is something very surprising," says lead researcher Pamela Carzon, who works at the Groupe d'Étude des Mammifères Marins (GEMM) in Tiputa, French Polynesia.

Bottlenose dolphins do sometimes 'kidnap' calves from another species. But these misplaced young are usually adopted by females who couldn't raise their own, and they tend to disappear shortly after.

Within a community of bottlenose dolphins at Rangiroa Atoll, however, something inexplicable is going on. In 2014, an adult female dolphin was photographed with her presumed first offspring; just two months later, an unusual, one-month-old "short‐beaked" calf joined her ranks. 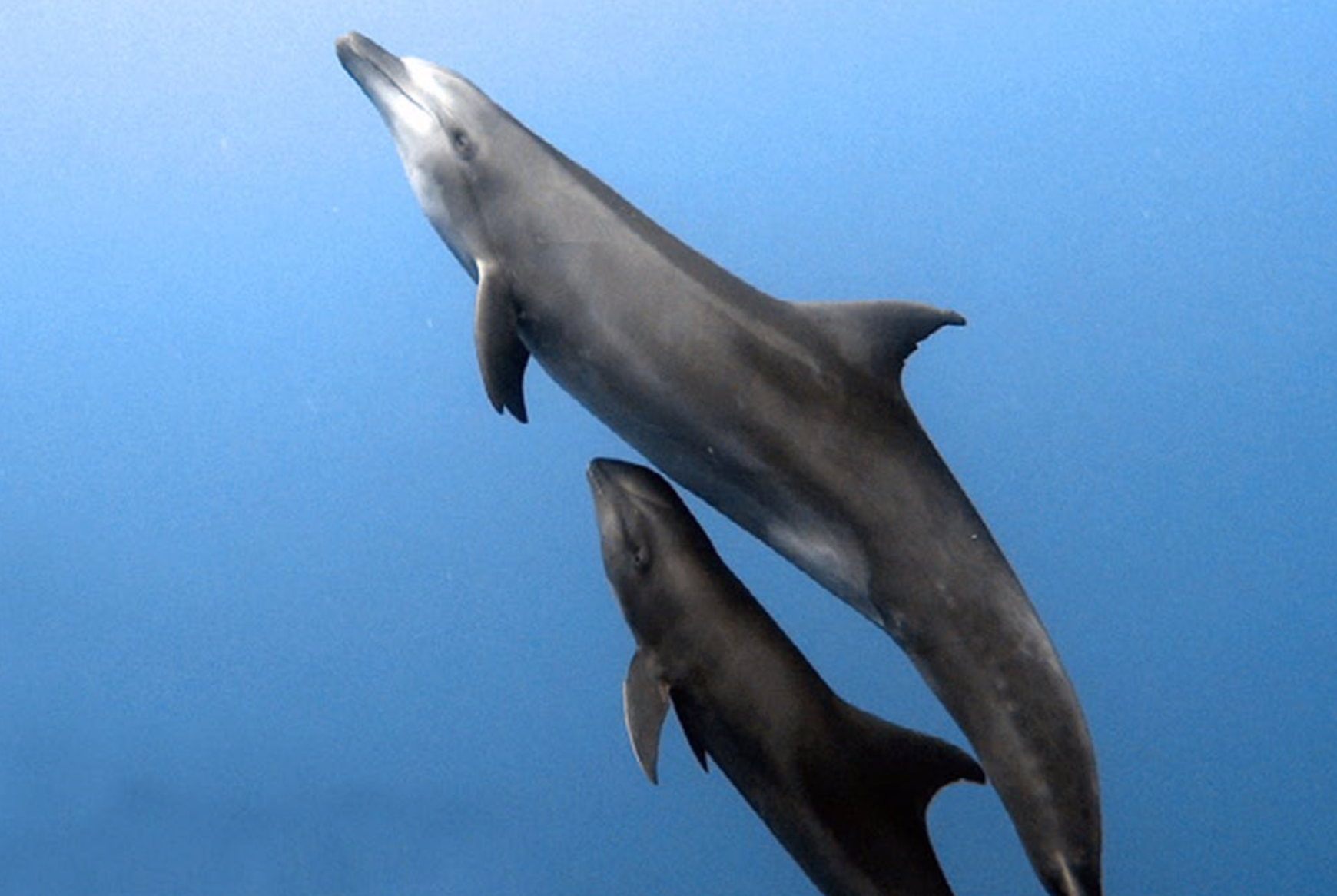 Given that the mother dolphin already had her own young, researchers think it's unlikely that the new calf was kidnapped. And in the absence of any genetic data, they are as sure as they can be that the calf is not some sort of dolphin-whale hybrid.

"The second calf was documented as male; it possessed a slender profile, rounded head and blunt rostrum, pointed pectoral fins, dark pigmentation and whitish patterns between the throat and urogenital area - all morphological characteristics of a melon‐headed whale," the authors write.

A year later, the researchers clearly observed the whale calf nursing from its foster mother and swimming in a typical infant position beneath her. What's more, on multiple occasions, the intruder calf was filmed pushing its dolphin sibling away from its own mother's belly.

Between the end of 2015 and the beginning of 2016, the biological calf disappeared. No one can say for sure what happened to it or why, but the researchers suggest it could be related to competition with the second calf, leading to deficient maternal care.

"It is very difficult to explain such behaviour, especially since we have no information on how the melon-headed whale newborn was separated from his natural mother," explains Carzon in a recent video. The reasons for this exceptional adoption may have to do with the dolphin's inexperience as a mother. Plus, her general friendliness towards human divers could also have made her more tolerant to other species, so it's possible that another female kidnapped the newborn, and then this specific mother accepted it.

An outside expert told National Geographic it was all about timing.

"Most likely, it was just a perfect moment for this calf to come along, when [the mother] was at a very receptive period to forming those bonds with her own offspring, and it led to this slightly wacky situation," Kirsty MacLeod, a behavioural ecologist at Lund University, told Erica Tennenhouse.

Still, the mother isn't entirely to blame for this species mix-up. While she never showed ambivalence to the intruder, from what the divers could tell, the orphan whale was quite persistent in initiating and maintaining this odd mother-child interaction.

"It seems the young melon-headed whale has been well integrated into his adoptive community, and adopts behaviour consistent with those of his adopted group: he surfs and jumps with the bottlenose dolphins, he socialises with young bottlenose males and females, and seems to communicate with other members of the community," says Carzon.

"If he comes to the age of weaning, it's very likely that he'll live a bottlenose dolphin life."

The research has been published in Ethology.