Environment30 May 2022
By Marcelle McManus, The Conversation

"You can't manage what you can't measure", according to a famous business mantra often attributed to management guru Peter Drucker. This can help explain why carbon emissions are under more scrutiny than ever as we ramp up our efforts to avoid the catastrophic effects of climate change.

For example, the "carbon footprint" – a way of measuring the amount of greenhouse gases (mostly carbon) emitted during a product's creation, use and disposal – has become a household term. With a plethora of carbon footprint calculators now available online, you can find data on the footprint of cars, electricity generation, education, countries, and just about anything else besides.

Although this might seem to benefit our efforts to tread more lightly on the planet, the reality is less clear. Last year, an article in The Guardian highlighted the influence oil companies have had on the carbon footprint's growing popularity.

Its main message was that the idea of measuring personal carbon footprints – in other words, calculating the emissions we're responsible for as individuals – was originally promoted by oil giant BP to shift the burden of action (and blame) from fossil fuel companies to consumers.

In many respects, this tactic worked. Free carbon footprinting tools became common, and people even began to rank them for ease, accuracy and reliability. For example, this calculator by the World Wildlife Fund tells me my footprint in tonnes, as well as which parts of my lifestyle are the main contributors to it. 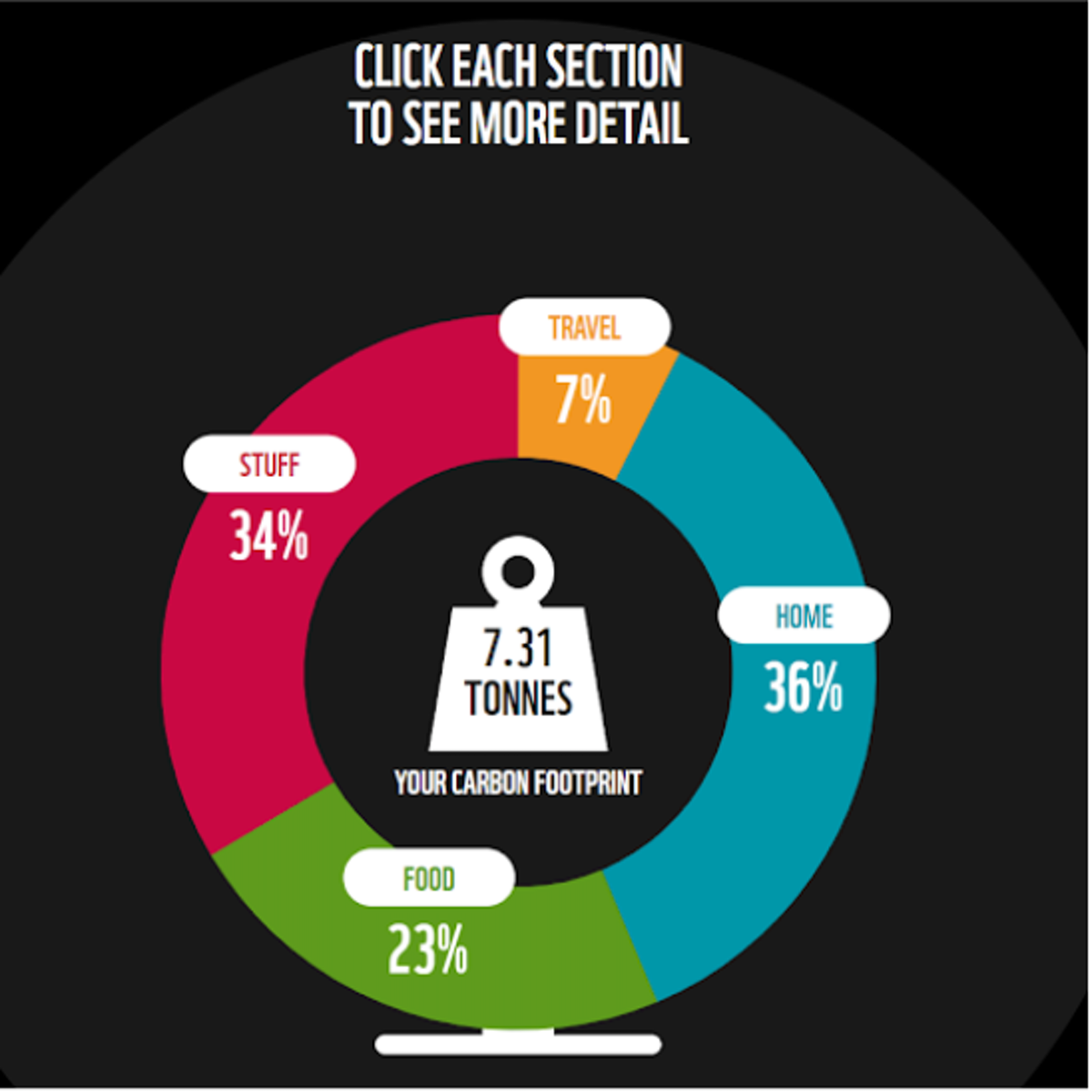 Here's the breakdown of my own carbon footprint. WWF. (Author provided)

Compared with others in the UK, my footprint is relatively low. This is partly because I work in sustainability for a living, so I keep my heating down low, I use solar panels to generate electricity and I try to walk as much as I can.

In global terms, however, my footprint is pretty big, and to avoid the worst effects of climate change it needs to get smaller quickly. At least, that's the message being sent by many NGOs, politicians and climate activists – among others.

Here lies the problem: it may no longer be in anyone's personal capacity to make changes great enough to reverse the damage already done. In a world where just 100 companies are responsible for 71 percent of global emissions, we need a total overhaul of the carbon-intensive systems around us instead.

The idea of the carbon footprint developed from an environmental management methodology known as the "life cycle assessment". It was one of the first ways to measure the impact of a product or system over its entire lifetime, helping companies manage their spending on materials and energy.

Tools like these were first developed by companies such as Coca-Cola in the 1970s to help them cut energy use during the energy crisis caused by unrest in the Middle East.

But as disposable products became more common, and litter became an associated, growing problem, company marketing began to focus on using footprints to allocate personal responsibility rather than taking producer responsibility – an approach more common in EU legislation and policy.

These tools aren't bad in themselves. In fact, life cycle thinking is key to making good design choices when building technology. It's increasingly used to help ensure we don't create new problems while trying to solve climate change through innovation. The problem is that when these tools are applied to individuals, it takes the heat off the companies who have been driving the climate crisis for decades.

Instead, these tools can be used to develop more sustainable fuels by identifying and addressing "hot spots" of carbon emission in the fuel production process. They can also be used to show where we can most effectively reduce the negative effects of plastic proliferation through increasing recycling in those areas.

Carbon footprint analysis can equally be used on global businesses to show where their carbon outputs are really coming from. For example, a recent report shows how the footprints of ten of the largest tech companies including Google and PayPal are largely caused by their investments supporting the fossil fuel industry, leading to calls for divestment.

Of course, we shouldn't totally dissociate ourselves from responsibility. Carbon footprints can still be used to assess our own purchase, investment and leisure choices to great effect.

But on top of this, carbon footprint calculations should be used by industries and governments to prove they're making the necessary changes to cut embedded emissions and keep more carbon in the ground.

Making footprints public could also put financial and legislative pressure on companies and systems with the greatest climate influence. The carbon footprint has real power: let's aim it where it'll be most effective.