Starlink has had its fair share of critics in the last few months. The ambitious SpaceX project to launch up to 42,000 satellites and provide worldwide internet access has the International Astronomical Union, scientists, and stargazers nervous about the implications of such a huge number of satellites in our orbit.

The recent Monocerotid meteor showers did nothing to calm down the critics, after a large train of satellites photobombed the natural display in the early morning over a number of days last week.

You can see what this looks like in footage taken by the Global Meteor Network (GMN) camera at the Farra Observatory in Italy on November 25 (the satellite bombing begins just after 1:00):

It looks impressive on the timelapse, but it looks even more insane on the GMN co-added images:

"It was a real eye-opener," Bill Cooke, the lead of NASA's Meteoroid Environment Office told Space Weather, after he saw the video.

"This kind of thing could force us to change how we write software to auto-detect meteors."

And this isn't just on one camera. The GMN have over 150 meteor cameras across the world, and around half got a nice dose of Starlink in their view.

Here's another GMN image taken on November 25, this one from Cherkessk in Russia. 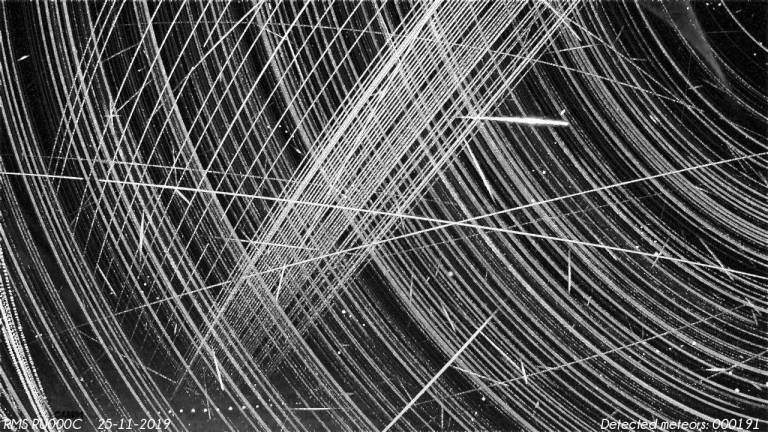 As you can probably tell from these shots, this situation is far from ideal if you want to be studying the night sky. The GMN explains that in this instance the satellites – which were launched on November 11 - didn't interfere with the meteor observations, but they were nervous about how this would affect their capabilities in the near future.

"One has to be concerned how will our skies look like when hearing that there are plans to launch a total of 42,000 satellites," University of Western Ontario meteor researcher Denis Vida stated in a GMN blog post.

"This might completely deny us to do any optical meteor observations as soon as 2024."

It's important to note that the current Starlink 'trains' we keep seeing in videos and scientific imaging shouldn't be as intrusive in a few weeks, as they are still rising to their final altitude. When the satellites are in their final position, they won't all be in a line, or crossing the same patch of sky at once.

Additionally, Elon Musk's SpaceX is looking into making the satellites a little less shiny, so they won't reflect the morning Sun in the way we keep seeing.

However, the number of satellites SpaceX is looking to shoot into space is completely unprecedented.

Astronomers are likely to have some pretty understandable problems getting used to the change to our night skies - some have even predicted the end of ground-based microwave radio astronomy.