As the new coronavirus was rapidly spreading in February and March 2020, many governments introduced stringent lockdown measures. Through a massive public effort, these countries have been successful at slowing the pandemic.

Combining various public health approaches, countries such as Slovenia and New Zealand have eradicated the virus within their borders. Other countries, including the UK, achieved significant progress in arresting the spread of the disease.

Yet the lockdown has led to substantial economic and social loss in countries where stringent social distancing measures have been applied. Governments, as well as the public, are now keen to start removing the restrictions and return to normal life.

With the relaxation of the lockdown rules, warnings are being sounded about a possible resurgence of COVID-19 cases – a so-called second wave. 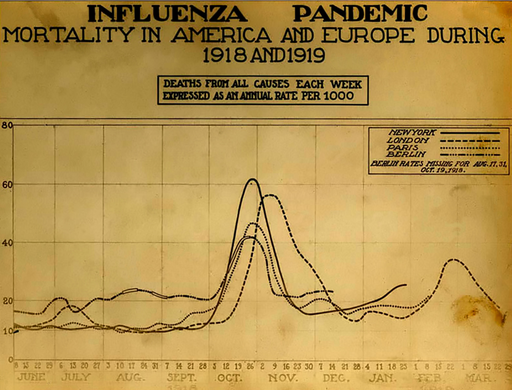 For the virus to spread, it needs a supply of susceptible and infected hosts and a successful transmission. These factors are conveniently captured by the reproduction number, R, the average number of new cases caused by one infected individual.

A value of R above one means the number of cases is increasing, whereas below one they are declining. Before the lockdown, the value of R for the coronavirus was estimated to be between two and four.

Countries such as China, South Korea, New Zealand, the UK and most European countries, have now reduced this value to below one. In other countries, such as Sweden or Russia, the value of R remains near or above one, reflecting the increase in the number of cases.

The relationship between the population behaviour and the value of R is complicated, but we can still use this concept to illustrate how the second wave might appear. 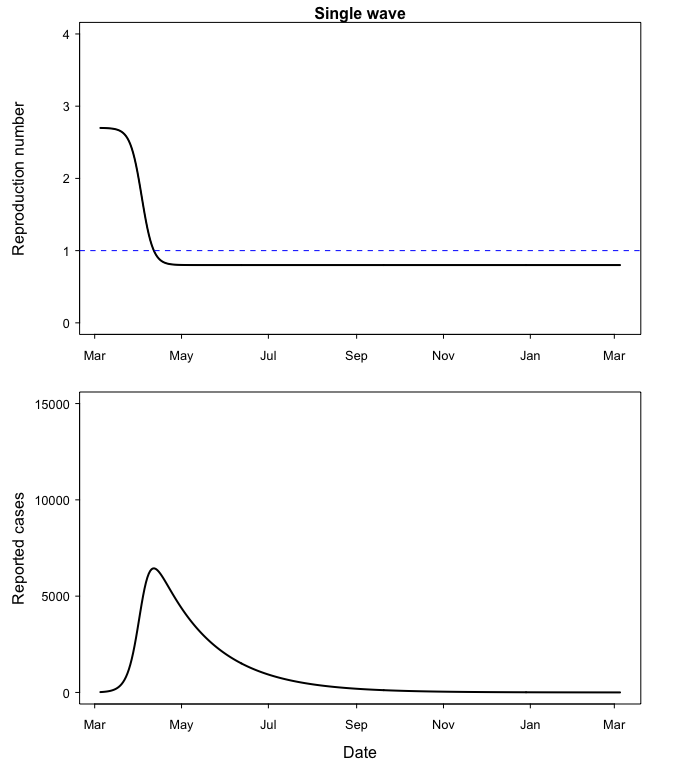 Above: Single wave epidemic. The top graph shows the time dependence of the model reproduction number. The bottom graph shows the predicted number of cases. The initial value of R is 2.7 and drops to 0.8 with the lockdown.

As long as there are susceptible and infected people in the population, the virus can spread. Evidence is accumulating that the first wave of the epidemic resulted in only limited immunity, well below herd immunity levels.

There are also pockets of a population in which the virus not only survives but continues to spread. The transmission in care homes now accounts for a large percentage of cases in many countries.

As the lockdown measures are relaxed, people are starting to interact more. This might result in increased values of R. But it is critical that the value of R is kept below or equal to one, as shown in the diagram below.

Above: Single wave epidemic with rebound due to lockdown relaxation. The initial value of R (top graph) is 2.7 and drops to 0.8 with the lockdown, but goes back to 1 as lockdown measures are relaxed.

But even a relatively modest change of R to 1.2 would result in a large outbreak causing the second wave, demonstrating how important it is to get the control measures right. 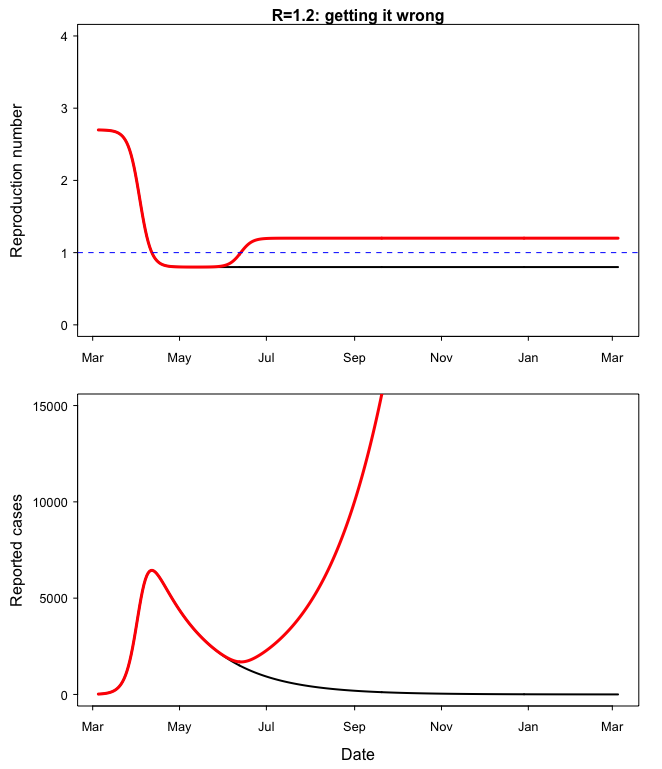 Above: Second wave. The initial value of R (top graph) is 2.7 and drops to 0.8 with the lockdown, but goes back to 1.2 as lockdown measures are relaxed.

Response to the second wave requires recurrent lockdown measures, as shown below. But while society has so far obeyed the restrictions remarkably well, lockdown fatigue might make it more difficult to impose such strict policies again.

Above: A scenario involving multiple outbreaks and lockdown periods. The value of R (top graph) is periodically increased to 1.2 as lockdown is relaxed and then falls back to 0.8 as it is imposed again.

The epidemic could continue into autumn and winter when seasonal flu might be prevalent. While it appears that the SARS-CoV-2 virus is not strongly affected by weather, the healthcare system might become overwhelmed if COVID-19 and the flu strike at the same time.

On the plus side, preventive measures aimed at SARS-CoV-2 virus (such as masks and handwashing) might reduce the spread of the flu virus.

Finally, the virus could mutate resulting in a more infectious strain. Such a mutation might have caused the second middle wave of Spanish flu to be particularly severe.

If something similar happened for SARS-CoV-2 virus, the resulting epidemic would dwarf the current outbreak even if the new R value was only four, compared with 10-12 for mumps or 12-18 for measles. Mumps and measles are only kept from spreading widely by vaccination. 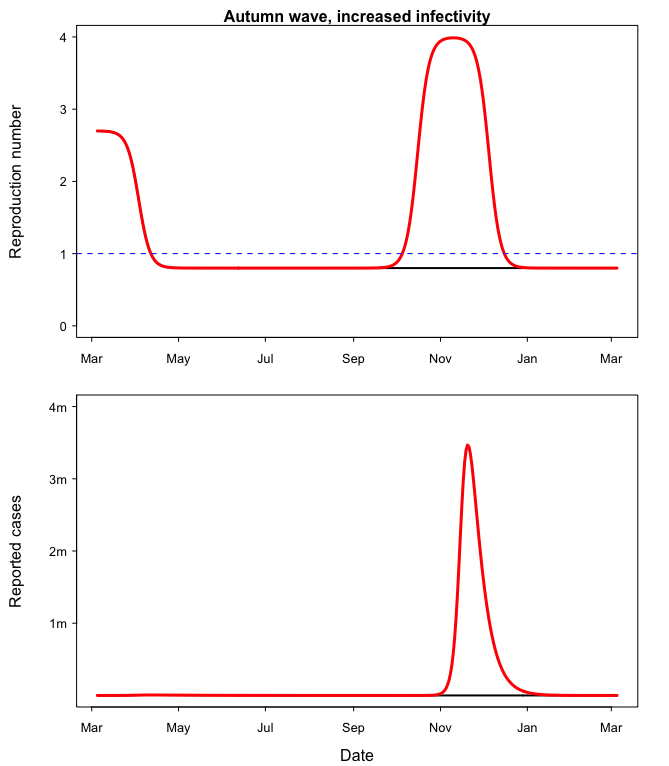 Above: Large autumn wave. The value of R (top graph) is increased to 4 for a short period in November. Note the changed number of cases compared to other graphs.

In the near future, governments will need to delicately balance the needs of the economy and social life with suppressing the spread of the virus. Test, trace and contain and local responses are key elements of the strategy.

Epidemiological models and concepts like R can help in establishing where, how, when and for how long, the government needs to intervene to prevent the second wave.

Adam Kleczkowski, Professor of Mathematics and Statistics, University of Strathclyde.