Researchers working with NASA's Hubble Space Telescope just confirmed that Neptune has a new dark vortex floating through its atmosphere.

Though these vortices aren't that rare – notable ones were spotted by Voyager 2 in 1989 and again by Hubble in 1994 – the discovery represents the first dark vortex found in the 21st century.

Despite the ominous name, a dark vortex is basically just a weather system, occurring when a high pressure system travels through the planet's atmosphere surrounded by 'companion clouds'.

"Neptune's dark vortices are high-pressure systems and are usually accompanied by bright 'companion clouds', which are also now visible on the distant planet," the team explains. "The bright clouds form when the flow of ambient air is perturbed and diverted upward over the dark vortex, causing gases to likely freeze into methane ice crystals."

The new vortex's companion clouds were first spotted by amateur astronomers working at the W. M. Keck Observatory in Hawaii, though they were unable to fully confirm the discovery because – as of right now – only Hubble can capture blue wavelength images detailed enough to make them out on Neptune.

"Dark vortices coast through the atmosphere like huge, lens-shaped gaseous mountains," says team leader Mike Wong, from the University of California, Davis. "And the companion clouds are similar to so-called orographic clouds that appear as pancake-shaped features lingering over mountains on Earth."

Despite knowing what they are, NASA officials still aren't sure how these dark vortices spring to life, how they move around, or how they eventually dissipate. This confusion is amplified by the fact that all of the recorded dark vortices are very different from one another, leaving very little to build off of.

The good news is that it seems like dark vortices aren't that rare on Neptune, meaning that researchers should have the ability to study them quite often, especially as our telescopes become stronger.

The new discovery marks the third time since 1989 researchers have spotted the unique weather pattern. As the Hubble team reports:

"When NASA's Voyager 2 spacecraft flew by Neptune in 1989, astronomers were surprised to see such a gaping, dark hole at southern latitudes in the giant planet's cyan-coloured atmosphere. The dark spot later disappeared. But the Hubble Space Telescope captured a new northern dark spot of comparable size in 1994."

The news of the dark vortex comes only a day after NASA announced that they would extend the Hubble mission to 2021 despite the fact that the James Webb Space Telescope – Hubble's replacement – is set to launch sometimes in 2018. 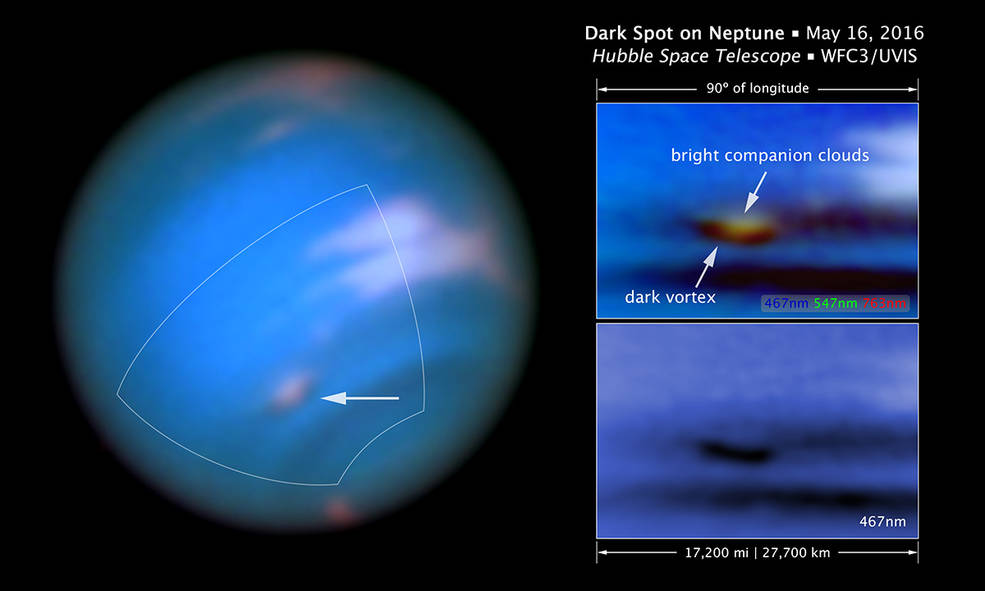 "After the final space shuttle servicing mission to the telescope in 2009, Hubble is better than ever," NASA officials said of the extension.

"Hubble is expected to continue to provide valuable data into the 2020's, securing its place in history as an outstanding general purpose observatory in areas ranging from our Solar System to the distant Universe."

Either way, it's safe to say that our telescopes are improving rapidly, giving astronomers the tools they need to make new discoveries and shed a light on some of the most mysterious parts of our Universe, and we can't wait to see what they find next.