While the world waits as patiently as it can for a COVID-19 vaccine to materialise, no shortage of questions remain. When will we have a vaccine? How will it be distributed? Will it be as effective as we hope?

Amid these pressing unknowns, there's another important question we need to be asking. How many people will choose to receive coronavirus vaccinations when they become available? The answer might surprise you.

In the face of such a deadly virus – a pandemic unprecedented in living memory – it'd be easy to assume that the clear and overwhelming dangers of COVID-19 would cancel out people's reluctance or refusal to get vaccinated. Such an assumption would be wrong, though.

The anti-vaccination phenomenon – called vaccine hesitancy – is officially considered one of the most dire global health threats (and that was in a pre-pandemic world).

Today, the risks that come with vaccine hesitancy stand to present an even more serious issue, and a new study underlines the extent of the problem we're facing.

In a global survey conducted in June involving over 13,000 people from 19 countries, the majority of people indicated they would be very or somewhat likely to take a COVID-19 vaccine proven to be safe and effective. That's the good news.

The bad news is the majority of people only amounted to 71.5 percent of the participants in the survey. In other words, almost three out of every 10 people said they either wouldn't take the vaccine (indicating refusal), or were neutral (indicating hesitancy).

Even more concerning is that the 19 countries the researchers surveyed were chosen because they were among the hardest-hit nations at the time of the poll in terms of reported numbers of COVID-19 cases. 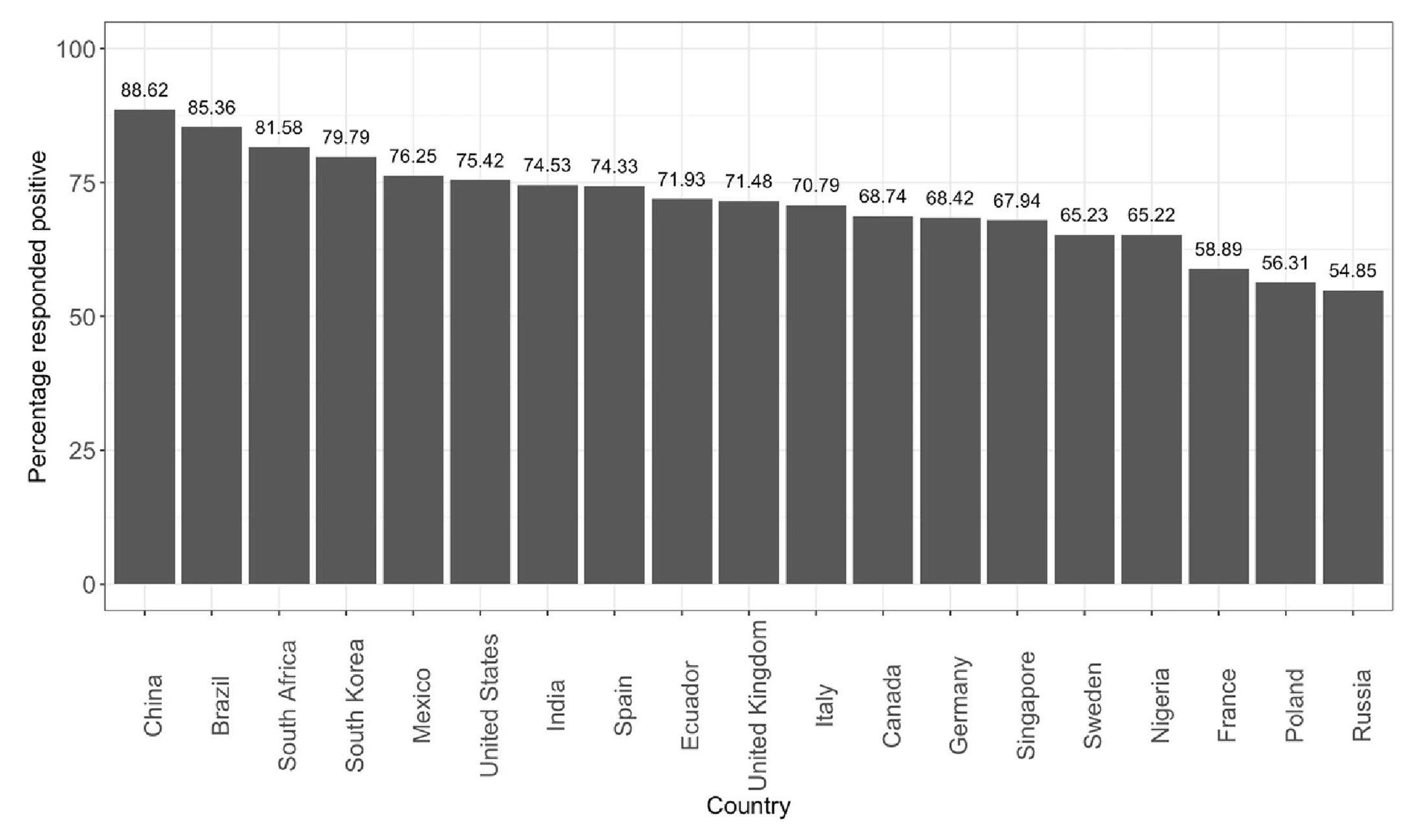 Above: Percent of respondents in each country who responded positively to the question 'If a COVID-19 vaccine is proven safe and effective and is available, I will take it'.

As the researchers point out, these kinds of numbers could potentially translate into tens of millions of potential vaccine avoiders in the real world if the same decisions were made; that said, surveys such as this aren't necessarily a firm predictor of what actual vaccine uptake will be, as vaccine decisions depend on numerous factors and can change over time, the researchers acknowledge.

Generally, people with higher incomes and more education were more likely to respond positively to vaccines, as were women compared to men, and older people compared to younger people.

Invariably, vaccine confidence was higher in countries where people had more trust in their government, whereas it was lower in a question asking about vaccination being mandated by employers.

"All respondents, regardless of nationality, reported that they would be less likely to accept a COVID-19 vaccine if it were mandated by employers," the authors of the study, led by infectious diseases researcher Jeffrey Lazarus from the University of Barcelona, explain in their paper.

"This finding across all countries with both high and low reported vaccine acceptance proportions suggests that promoting voluntary acceptance is a better option for employers."

Overall, the researchers say their results show governments and health authorities need to be prepared to address vaccine hesitancy and build vaccine literacy among the public, so that people choose to accept COVID-19 immunisation measures when they become available.

Clear and consistent communication from a variety of trusted sources will be crucial in building public confidence in vaccine programs, and time is of the essence. Subsequent polling conducted after this survey suggests vaccine hesitancy might actually be growing, even as we draw closer to vaccines being released.

Against the backdrop of all this hesitancy, doubt, and confusion, COVID-19 cases worldwide are still rising, and the stakes are higher than ever.

"The far-from-universal willingness to accept a COVID-19 vaccine is a cause for concern," the researchers write.

"Unless and until the origins of such wide variation in willingness to accept a COVID-19 vaccine is better understood and addressed, differences in vaccine coverage between countries could potentially delay global control of the pandemic and the ensuing societal and economic recovery."