In metals, electrons are normally expected to be diffusive in their movement, operating as individual particles – in other words, they don't gain momentum as a group.

In a new study, scientists have now discovered a type of metal where electrons actually do flow in a fluid-like way – like water in a pipe – by interacting with quasiparticles called phonons, which emerge from vibrations in a crystal structure.

This causes the electrons to shift from diffusive (particle-like) to hydrodynamic (fluid-like) behavior in their movement.

The metal superconductor that causes this behavior is a synthesis of niobium and germanium called ditetrelide (NbGe2), the research team reports. Potentially, it could give rise to a new type of electronic device.

"We wanted to test a recent prediction of the 'electron-phonon fluid'," says experimental physicist Fazel Tafti from Boston College.

"Typically, electrons are scattered by phonons which leads to the usual diffusive motion of electrons in metals. A new theory shows that when electrons strongly interact with phonons, they will form a united electron-phonon liquid. This novel liquid will flow inside the metal exactly in the same way as water flows in a pipe." 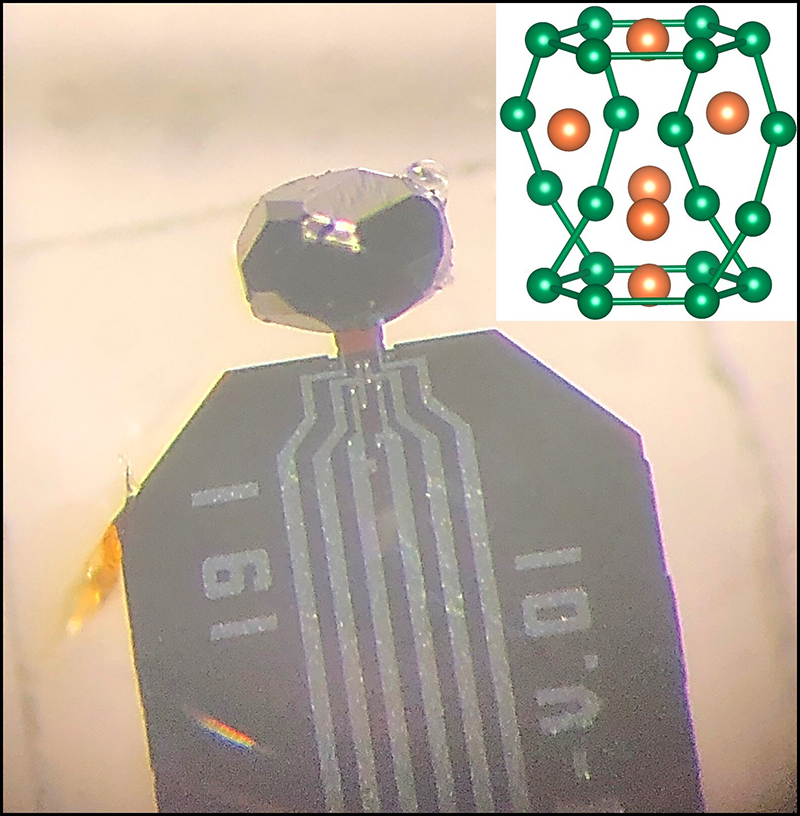 Above: A small crystal of the new material on a device, with the inset showing the atomic arrangement.

Three experimental methods confirmed the electron-photon fluid hypothesis put together by Tafti and his colleagues. The first was the measurement of electrical resistivity in the metal, which showed its electrons had a higher mass than would normally be expected.

Second, Raman scattering laser analysis showed that the vibration of NbGe2 changed because of the unusual flow of electrons, and finally X-ray diffraction techniques revealed the crystal structure of the metal.

The mass of electrons was three times larger than it should be, a material mapping approach known as quantum oscillations showed: another sign that the electrons and phonons were causing unusual behavior.

"This was truly surprising because we did not expect such 'heavy electrons' in a seemingly simple metal," says Tafti.

"Eventually, we understood that the strong electron-phonon interaction was responsible for the heavy electron behavior. Because electrons interact with lattice vibrations, or phonons, strongly, they are 'dragged' by the lattice and it appears as if they have gained mass and become heavy."

There's currently a lot of research interest in the idea of electron-phonon liquids, even if it's not fully clear yet what the implications might be for the electronic gadgets and communication systems of the future.

This new work opens up plenty of interesting options for future research. Next, the researchers want to find other materials that behave in the same way as NbGe2, and to work on controlling the fluid flow of electrons for future applications.

"Whereas electron-phonon scattering relaxes the electron's momentum in metals, a perpetual exchange of momentum between phonons and electrons may conserve total momentum and lead to a coupled electron-phonon liquid," the researchers explain in their study.

"Such a phase of matter could be a platform for observing electron hydrodynamics."