Jupiter is not a serene place. The giant planet is wracked with tempestuous storms, wide bands of roiling cloud that encircle the entire globe, extending to depths many times thicker than the atmospheric distance between Earth and space.

The gas giant's wild weather is so different from what happens on Earth that astronomers have struggled to understand it. But we just got another piece of the puzzle - in the form of breathtaking, near-infrared and optical images, taken using the powerful Gemini Observatory and Hubble Space Telescope.

The Gemini near-infrared images capture thermal radiation glowing through the clouds from Jupiter's interior. When combined with Hubble's optical images taken within hours of the Gemini ones, scientists can piece together the internal and external activity.

The high-resolution images reveal that regions of cloud that appear darker in optical images actually glow the most brightly in infrared, indicating those regions have little to no cloud compared to the lighter bands. "It's kind of like a jack-o-lantern," said astronomer Michael Wong of the University of California, Berkeley. "You see bright infrared light coming from cloud-free areas, but where there are clouds, it's really dark in the infrared."

This included a line curving around the edge of the Great Red Spot, a permanent storm currently a little larger than an entire Earth. Similar features had been seen in the storm before, but it was unclear what was causing them.

The new imagery cleared that question up rather neatly. When the two images were compared, a glowing infrared arc neatly matched up to an optical shadow, showing that the colouration marked a deep crack in the storm's swirling clouds.

That's really cool. But things got even more interesting when data from NASA's Jupiter orbiter Juno was thrown into the mix. As Juno orbits and makes close flybys of Jupiter's poles, it has been detecting atmospheric radio signals, called sferics and whistlers, from powerful lightning strikes.

In its first eight flybys, Juno's Microwave Radiometer Instrument detected 377 lightning discharges, clustered around the planet's polar regions. This is basically the opposite of Earth, where lightning storms are more common around the equator.

Planetary scientists believe that this has to do with how the Sun warms both planets. On both, the equator is warmed by the Sun. On Earth, this generates convection currents that drive tropical thunderstorms.

On Jupiter, which is much farther away from the Sun, equatorial warming is gentler, stabilising the upper atmosphere; but, scientists have theorised, this stabilising warmth doesn't reach the poles, so they're rather more tempestuous.

Combining this Juno data with the Gemini and Hubble images sheds more light on these wild storms, revealing the cloud structures around where lightning forms. "The data from Hubble and Gemini can tell us how thick the clouds are and how deep we are seeing into the clouds," explained planetary scientist Amy Simon of NASA.

The team found that the lightning strikes are generated in regions with large, convective towers of moist air over deep clouds of water, both frozen and liquid. Clear regions around these storms are probably caused by a downwelling of drier air outside the convection cells. 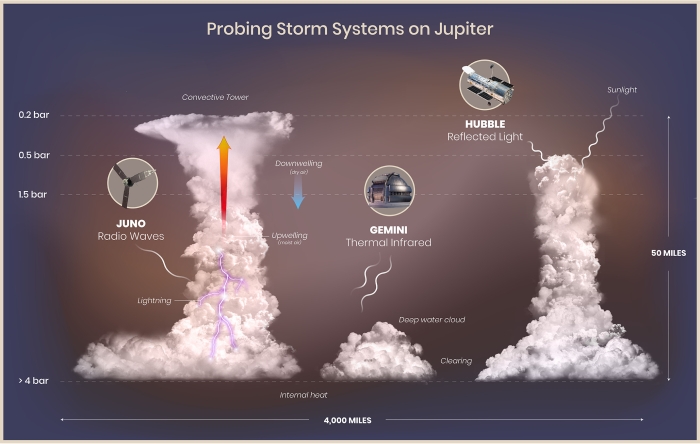 These coincide with what are known as folded filamentary regions, because the clouds are stretched and folded by Jupiter's insane winds. This new information suggests that they're teeming with convective activity, "the turbulent mixing process that transports Jupiter's internal heat up to the visible cloud tops", according to Wong.

The Juno mission is ongoing, scheduled to end in July of next year. These findings will inform how to probe the data it is still collecting, as well as future ground- and space-based observations. And we are finally getting a handle on Jupiter's savage weather.

"Because we now routinely have these high-resolution views from a couple of different observatories and wavelengths, we are learning so much more about Jupiter's weather," Simon said.

"This is our equivalent of a weather satellite. We can finally start looking at weather cycles."

The research has been published in The Astrophysical Journal Supplement Series.