Japan Is Sending a Lander to a Martian Moon, And It'll Be Back by 2030

Sending a mission to moons of Mars has been on the wish list for mission planners and space enthusiasts for quite some time. For the past few years, however, a team of Japanese Space Agency (JAXA) engineers and scientists have been working on putting such a mission together.

Now, JAXA announced this week that the Martian Moon eXploration (MMX) mission has been greenlighted to move forward, with the goal of launching an orbiter, lander — and possibly a rover — with sample return capability in 2024.

For the past three years, MMX has been in what JAXA calls a Pre-Project phase, which focuses on research and analysis for potential missions, such as simulating landings to improve spacecraft design. Now that the mission has been moved to the development phase, the focus will be on moving ahead with the development of mission hardware and software.

The MMX mission appears to be based on JAXA's successful small body exploration and sample return missions. The Hayabusa spacecraft's journey to asteroid Itokawa in 2005 and successfully completed a sample return to Earth in 2010, despite numerous hurdles and glitches on the spacecraft.

Then the Hayabusa 2 probe collected samples from the asteroid Ryugu in 2019, and the sample return spacecraft is scheduled to return to Earth in late 2020.

The plan for MMX calls for an orbiter-type spacecraft outfitted with several instruments to study both moons of Mars, Phobos and Deimos, for approximately three years.

MMX would then spiral in to Phobos and touch down on the surface, possibly with a rover outfitted with a corer-type drill to capture at least one sample "exceeding 10 g".

A propulsion module would be used to lift the sample return container off Phobos and head back to Earth, returning approximately September 2029. 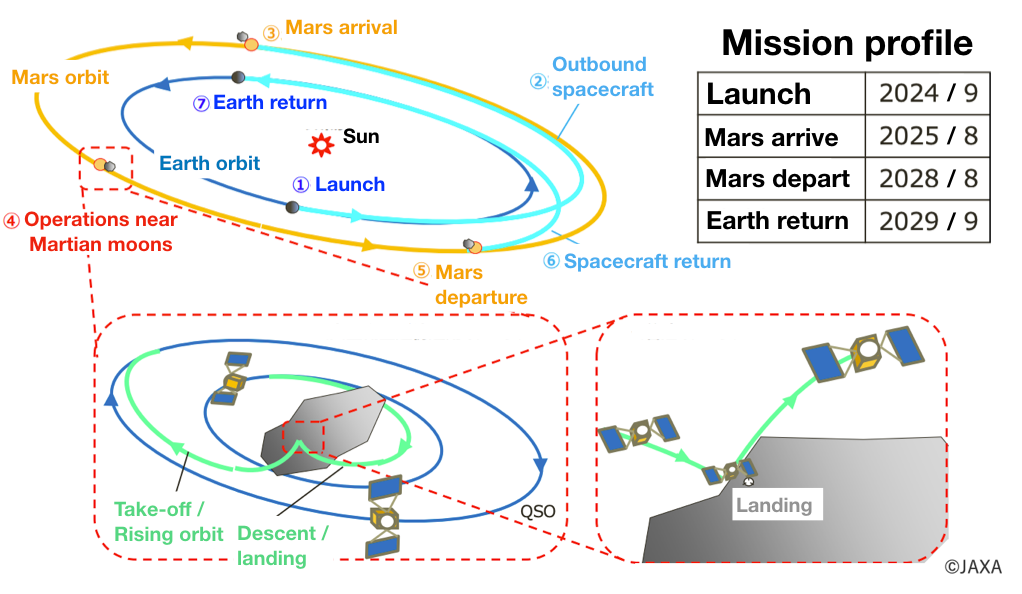 Studying and landing on the moons of Mars would be the next best thing to going to Mars itself.  Phobos and Deimos have been considered as places for a possible human base that would allow for easier access to Mars than going to the Red Planet directly, especially for the first human missions to the Mars system.

"Humans can realistically explore the surfaces of only a few objects and Phobos and Deimos are on that list," said NASA Chief Scientist, Jim Green.

"Their position orbiting about Mars may make them a prime target for humans to visit first before reaching the surface of the Red Planet, but that will only be possible after the results of the MMX mission have been completed."

The MMX team said that the mission will "test and demonstrate the necessary technology for entering and leaving Mars's gravitational well, landing and navigating on the surface of low-gravity bodies and deploying equipment for tasks such as surface sampling."

The mission will also measure the radiation environment, which is one of the big concerns for humans traveling beyond the protection of Earth's magnetosphere.

The projected costs for MMX is 417 million.

The mission is expected to be international in nature, equipped with eleven instruments, four of which will be provided by international partners at NASA (USA), ESA (Europe), CNES (France) and DLR (Germany).

The JAXA-built instruments include a telescopic (narrow-angle) camera for observing detailed terrain, the wide-angle camera for identifying hydrated minerals and organic matter, the LIDAR laser altimeter, a dust monitor and a mass spectrum analyzer, to study the charged ions around the moons, the sampling device and sample return capsule, and a radiation environment monitor.

NASA has signed on to contribute a gamma ray and neutron spectrometer to examine the elements that constitute the Martian moons, and also a pneumatic sampling device.

CNES is building a near-infrared spectrometer that can identify mineral composition, and is working with DLR to design the rover, which could explore the surface of Phobos. ESA is listed as assisting with deep space communication equipment.

Trending News
Skipping Meals Could Be Much Worse For You Than We Realized Health2 days ago
NASA Just Discovered a Rare Earth-Sized Planet in a Habitable Zone Space3 days ago
Fathers Have Been Older Than Mothers For 250,000 Years, Study Finds Humans3 days ago