Juno has been sending home some incredible postcards of Jupiter, with one slightly frustrating caveat: because of the data transfer limitations, they are, by necessity, still pictures. Now an amateur scientist has used those photographs to extrapolate an animation of Jupiter's clouds, and the results are just jaw-dropping.

Gerald Eichstädt is a member of the Planetary Society who works as a mathematician and processes Juno imagery in his spare time. He created the video from two images taken by JunoCam on April 1 of this year.

They show the intricate whorls and crimps of Jupiter's turbulent clouds, snapped as the orbiter swung around from the planet's South Pole.

Eichstädt reprojected the two images so that they could fit the same vantage point. This allowed him to directly compare them, more accurately gauging the changes in the clouds.

He then modelled the movement of individual pixels to create an animation of how the clouds got from point A to point B.

It looks a little bit rough - because it is. The animation is more of a proof of concept, Eichstädt noted. With more Juno images providing additional data points, a longer video could be extrapolated at some point in the future.

"This animation represents a 'feasibility test'," he explained. "Building on this initial work, we can add in more variables that will give us a more detailed description and physical understanding of Jupiter's atmosphere."

Seán Doran, another Planetary Society citizen scientist and a visual artist, worked with Eichstädt to create a composite image of Jupiter, with the region showing towards the planet's South Pole (you can see it at the top of this page, and an image highlighting the exact region below). 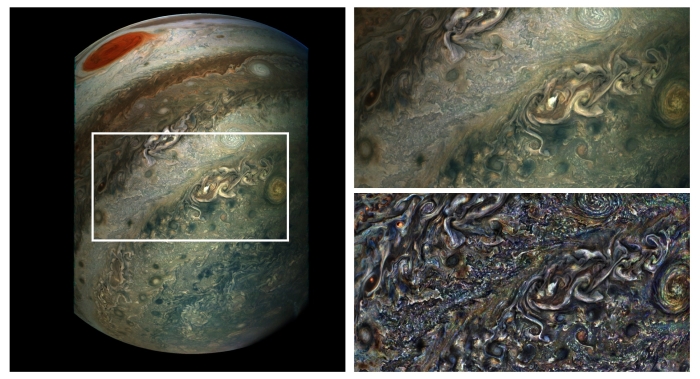 Doran then processed the image - smoothing the edges, adjusting the colours, filling the gaps - to make it look like a cohesive whole, rather than a mosaic.

"It's something of a labour of love that requires plenty of patience," Doran said.

"Energetic particles impact the CCD and produce bright specks. Once I'd finished the processing, I needed to go through and repair a couple hundred of these bright pixels."

The pair presented their work at a Juno workshop held by the Royal Astronomical Society in London this week.