In research that could have come from the plot of a high-tech Indiana Jones reboot, airborne laser scanners have been used to reveal several undiscovered cities hidden in the jungles of Cambodia.

Not only does the study show how powerful this technology has become, but the findings could change our thinking on the history of south-east Asia.

The newly found settlements are located close to the ancient temple city of Angkor Wat in the north-west of the country, and are estimated to be between 900 and 1,400 years old. Some of the cities look to be as large as the Cambodian capital, Phnom Penh.

State-of-the-art Lidar technology was used to survey the landscape, reports Lara Dunston from The Guardian, which can filter out surface vegetation to reveal hidden details in the shape of the terrain. Difficult to spot from the ground, these details and patterns can reveal the sites of ancient civilisations and infrastructure.

A helicopter equipped with an airborne laser scanner is used to carry out these kind of surveys – the chopper keeps to a pre-arranged flight path, airspeed, and altitude, while 16 laser pulses measure each square metre of ground. The time the beam takes to return to the helicopter reveals the height of the ground. Similar technology was used to spot Roman roads in the UK earlier this year.

"We have entire cities discovered beneath the forest that no one knew were there," archaeologist Damian Evans, who carried out the research, told The Guardian.

Evans, who works for the École française d'Extrême-Orient institute in France, added there are "fascinating new insights" to be gleaned about the rise and fall of the Khmer empire during the 15th century.

Climate change and water management might have played a role in that process - rather than another invading army - and the scans put together by Evans show an elaborate network of water systems that look to have been built hundreds of years before this sort of technology was thought to exist.

"These airborne laser discoveries mark the greatest advance in the past 50 or even 100 years of our knowledge of Angkorian civilisation," archaeologist Michael Coe from Yale University, who wasn't involved in the research, told The Guardian. 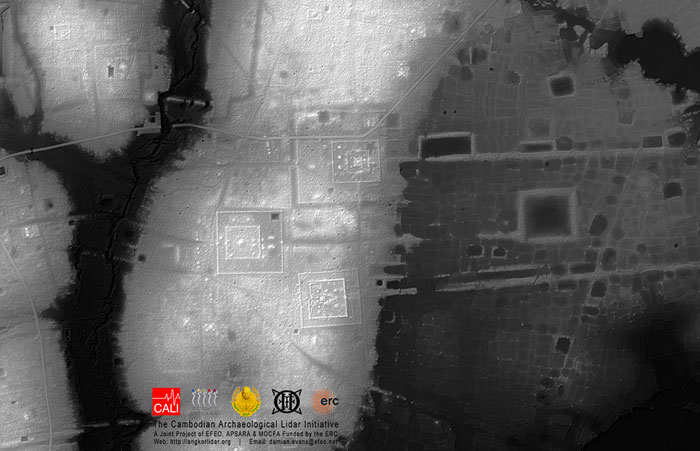 Furnaces, mines, and even beer gardens were discovered by the Lidar scans, with the newly discovered cities linked together with roads and canals. Although archaeologists had long suspected some of these settlements existed, others revealed in the scans are a complete surprise even to the experts.

"It turned out we'd been walking and flying right over the top of this stuff for 10 years and not even noticing it because of the vegetation," said Evans. "What we had was basically a scatter of disconnected points on the map denoting temple sites. Now it's like having a detailed street map of the entire city."

A paper outlining the new research, which pulls together scans taken from 2012 and 2015, has been published in the Journal of Archaeological Science.