Strange things are happening on the shores of the Philippines right now, with two massive carcasses washing up in separate locations, sparking questions over what's been dredging them out of the sea.

A shredded monstrosity laced with blood appeared on the Dinagat Islands province on Wednesday, and last week, locals in Agusan del Norte dragged a massive oarfish carcass out onto the beach, sparking speculation that the country's recent earthquakes could be to blame.

The creature in the image above caused alarm with the locals this week because its large, 4.5-metre (15-foot) bulk was so obscured by what appeared to be shredded flesh, no one could figure out what it was.

The whole thing was very reminiscent of this monstrosity that washed up on a New Zealand beach late last year, which turned out to be a bunch of gooseneck barnacles clinging to a large piece of driftwood.

This time, it really does appear to be one hulking creature, with Sufenia Chua from the Cagdianao Municipal Agriculture Office telling Charmane Awitan from local news station ABS-CBN News, the carcass is likely to be of a sea cow (or dugong).

"According to the aquaculture technologist, it is likely that the carcass was that of a sea cow, based on skin found near the shore," Awitan reports. "Chua added that there were also previous sightings of sea cows in the area."

The Municipal Environment and Natural Resources Office (MENRO) of the Dinagat municipality is reportedly examining the carcass to confirm the species and figure out its cause of death.

Nicknamed 'globsters', there have been several such carcasses washing up on beaches around the world over the past couple of centuries, including the famous Trunko - a globster reportedly sighted in Margate, South Africa, on 25 October 1924: 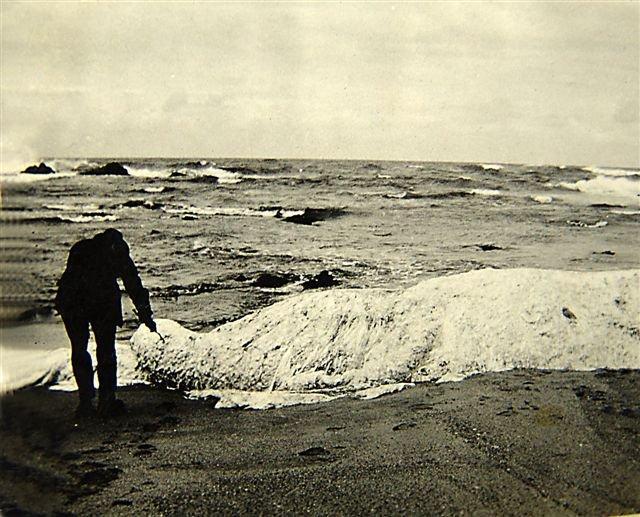 While no scientist ended up examining the carcass, giving us no concrete identification, Darren Naish, a vertebrate palaeontologist from the University of Southampton in the UK, gave this explanation for Trunko in his book, Hunting Monsters: Cryptozoology and the Reality Behind the Myths:

"[The photos] show that it was the rotting carcass of a large vertebrate, most likely a whale. The idea that this was really the body of a white-furred, trunked sea monster stems from naivety about the appearance of rotting animal carcasses.

[The photos] are somewhat ambiguous, but the enormous bulk of the carcass, the large amount of what looks like frayed, badly decayed collagen, and the presence of what seems to be a mostly obscured internal skeletal framework suggest that this is another globster - a rotting mass of whale tissue."

The second strange thing that's washed up on the shores of the Philippines lately is a massive oarfish - large, bony fish that can grow several metres long, and are very rarely seen on the ocean's surface. 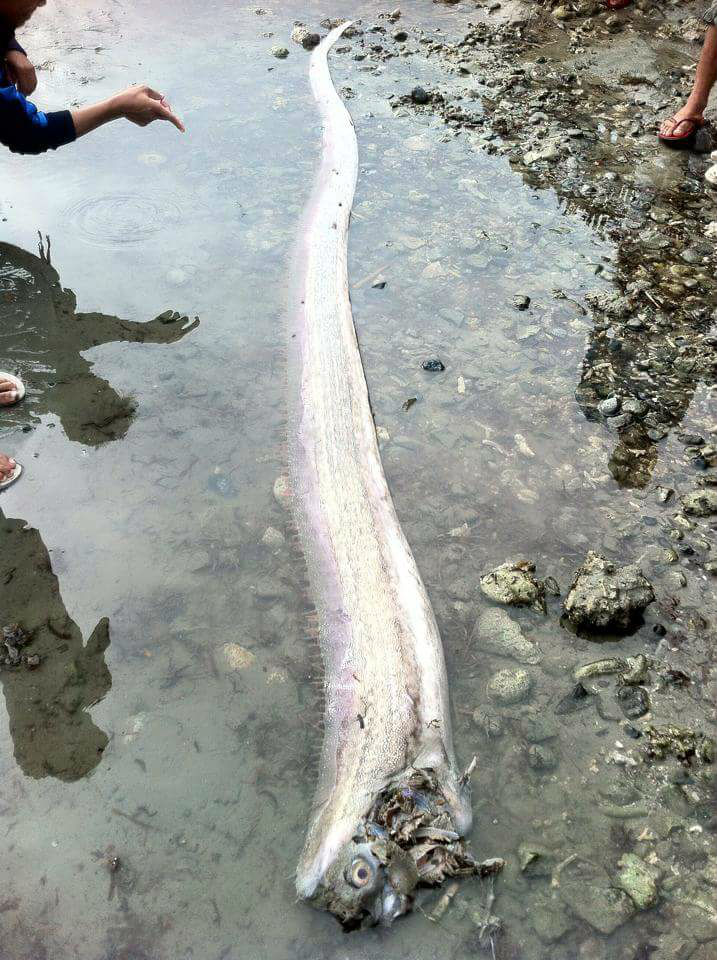 As Rachel Brown reports for National Geographic, these deep-dwelling creatures - which range from 200 to 1,000 metres deep in the epipelagic to mesopelagic ocean layers - are rarely sighted, but when they are, they usually come in twos or threes.

And, sure enough, just days before this one washed up, a fisherman reportedly caught one off the same coast.

"Whatever the oceanographic phenomena are that push these animals on shore, they're probably on a large enough scale to affect more than one oarfish," Mark Benfield, an oceanographer and ecologist at Louisiana State University, told Brown.

Oarfish have enjoyed legendary status in Japan as being a "Messenger from the Sea God's Palace", thought to be harbingers of impending earthquakes - something that hasn't been lost on the Philippine locals, who experienced a magnitude 4.6 earthquake yesterday, and a magnitude 6.7 earthquake on February 10.

"In fact, six oarfish - including the one from Agusan del Norte - were sighted in the days before and after a 6.7-magnitude earthquake killed eight people and injured 200 others in Surigao City, Philippines, prompting a flurry of social media discussion about the species' apparent portents," Brown reports.

The idea has some scientific merit, UK biologist Rachel Grant from the Anglia Ruskin University in Cambridge, told The Independent back in 2013, but concrete evidence is so far lacking.

"It's theoretically possible because when an earthquake occurs there can be a build-up of pressure in the rocks which can lead to electrostatic charges that cause electrically-charged ions to be released into the water," she said.

"This can lead to the formation of hydrogen peroxide, which is a toxic compound. The charged ions can also oxidise organic matter which could either kill the fish or force them to leave the deep ocean and rise to the surface."

Benfield, on the other hand, is more skeptical about the connection between earthquakes and oarfish, telling National Geographic that oarfish don't live near the ocean floor where seismic activity would emanate from, and if the hypothesis were true, other species would be affected too.

"It's hard to imagine what sort of phenomenon would occur before an earthquake that would cause these oarfish to leave the [mesopelagic zone] to move towards shore and strand," he said.

Without sufficient evidence, we'll have to leave this one as a mystery for now, but hopefully as more research is done using roving deep-sea vehicles, we'll get a better idea of what's bringing these creatures to the surface.

In the meantime, check out this rare footage of an oarfish in its habitat: