The new DECam image of Centaurus A. (CTIO/NOIRLab/DOE/NSF/AURA)

Weird neighbors. We've all had 'em. And apparently that's as true for galaxies as it is for the people in them.

One of the Milky Way's strange fellows is Centaurus A, a peculiar galaxy over 12 million light-years away. It's one of the closest galactic neighbors we have with an active supermassive black hole in its center, so we really like to look at it. With telescopes. Which kind-of makes us sound like the weirdos, really, when you think about it.

Putting that aside for a moment, this neighborly peering has now given us a new and glorious image of Centaurus A, from the Dark Energy Camera (DECam) in Chile. It shows some of the features that make Centaurus A so interesting, in exquisite detail.

The new DECam image of Centaurus A. (CTIO/NOIRLab/DOE/NSF/AURA)

We're viewing the galaxy from the side, which means we can't see the galactic center itself. In addition, Centaurus A is thick with dust - those are the dark streaks wrapping around the outside. Warping is also apparent in its disk, and in its magnetic fields. These characteristics are evidence of a violent past, a collision with another galaxy that left its mark on Centaurus A.

This colossal encounter had other effects, too. The galactic collision triggered a burst of star formation, which is ongoing; it's visible in the new image in the glowing red of hydrogen clouds and blue glow of baby stars, visible around the thick dust lanes.

Centaurus A's supermassive black hole, clocking in at 55 million times the mass of the Sun, also generates some pretty interesting features. Stretching thousands of light-years into space are colossal jets, launched from the poles of the black hole as it actively devours material.

These jets don't emerge from the black hole itself. Material swirls around the massive object like water circling a drain, with material from the inner edge of this disk falling onto the black hole.

However, not all the material passes beyond the event horizon; some of it, scientists believe, is accelerated along the magnetic field lines outside the black hole towards the poles, where it is launched at a significant percentage of the speed of light in the form of a plasma jet. 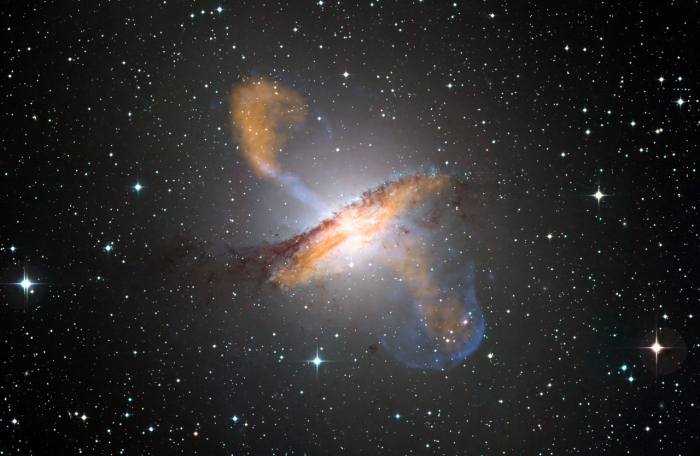 Each of Centaurus A's enormous plasma jets is blasting into intergalactic space, creating vast lobes emitting radio waves. These lobes are each nearly a million light-years long. Because the galaxy is so close, they're incredibly bright in the sky, which makes Centaurus A an excellent laboratory for studying how these jets work.

In fact, earlier this year, they were the focus of work released by the Event Horizon Telescope collaboration, which used its powerful array to take the most detailed images of these jets yet.

Centaurus A has one more really cool trick up its sleeve. It has a swarm of dwarf galaxies orbiting it on a plane, a bit like the planets around the Sun. Models predict that dwarf galaxies should orbit a massive galaxy every which way, not in an orderly fashion. Centaurus A is the first galaxy outside the Local Group for which we have identified tidy satellites.

(In the Local Group, the Andromeda galaxy and our own Milky Way also have dwarf galaxies orbiting on a plane. Scientists just thought that we might have been outliers. Centaurus A hints that this might not be the case.)

Which, in turn, suggests that we may have more in common with Centaurus A than we thought. The Milky Way, after all, also has a violent past and a warped disk. So maybe, even now, someone in Centaurus A is peering right back at us, and taking photos. You should look out the window and wave, just in case.